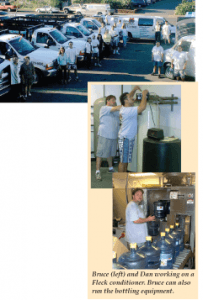 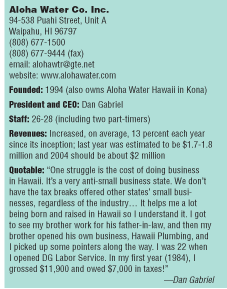 Hawaii may be one of the 50 United States but, for independent water treatment dealers and franchises alike, it’s a business world away from the “mainland.” Take Dan Gabriel, co-founder of Aloha Water Co. Inc., of Waipahu, Hawaii. He’s a local boy, or “kamaaina.” Over his 10-year tenure as president and chief executive officer of the business, he learned to use two different answers when asked what he does for a living.

And why wouldn’t Hawaiians recognize perhaps the most renowned name in the water services industry? To be honest, Hawaii isn’t necessarily a must-have market for the franchise.

Installers only
Gabriel recalls a time in the mid-1980s when Culligan sold 350 units (reverse osmosis and water softeners), Water Resources Int’l. sold about 500 units, and Rainsoft managed to move between 800 and 1,000 systems to the locals. But that’s the farthest it ever went. Instead of securing the installation and service contracts for these customers, all three companies paid other independent dealers—such as Aloha Water—to put the systems in homes and essentially handed over the customer accounts.

Shortly thereafter, Gabriel—who was then running his own “handyman/service/plumbing” business called DG Labor Service—found himself with almost 1,800 new customers. Being one of the only licensed plumbers who had knowledge of water system hook-ups, his business soon took off. The timing couldn’t have been more perfect for Gabriel who had predicated much of his business to that point on installing solar heating systems as well as doing service work for water boiler companies early in the ’80s. In addition, changes in Hawaiian law had removed a vital tax credit for solar unit purchases and that market virtually dried up.

According to Gabriel, Culligan has tried repeatedly to penetrate the Hawaiian market, but without much success. The franchise company does have national agreements to handle water treatment systems for outfits such as the Cheesecake Factory, but the equipment is sold by the nearest dealer in California who, in turn, contracts installation and service work to Hawaiian independents. Gabriel summarizes the advantages of being an independent dealer on the big island of Oahu this way: “On the mainland, if you are a Culligan dealer, that is all you are. We’re kind of like Sears Brand Central here. We’re authorized by a dozen different water purification manufacturers as a service department.”

Falling into it
A plumber by trade, the 41-year-old Gabriel is the youngest of five children who learned at the feet of his oldest brother—12 years his senior—who married a woman whose father owned a plumbing company. When the school year ended and summer rolled around for the younger Gabriel, the elder one would tell him flatly: “You’re going to work.”

The younger Gabriel was doing full-time plumbing by the 11th grade. But that wasn’t his first choice. Born and raised in Oahu, he studied for a couple of years at Tacoma (Wash.) Community College and sought a career in public relations. “No one says, ‘When I grow up, I want to be a plumber,” he laughs. “You fall into that kind of work.”

In 1994, Gabriel along with his wife, Trish, founded Aloha Water. For the first year, point-of-use (POU) water coolers carried the business as far as profits. Afterward, bottled water has made everything else self-supportive, he says. At any given time, the company has between 26 and 28 employees, and only three of them are devoted to POU-related business. Currently, Aloha Water has nearly 4,000 POU accounts and 8,000 bottled water accounts.

And why is bottled water such a hot commodity in Hawaii, Gabriel is asked. “It’s much easier to sell bottled water than it is a POU system, based on the local knowledge here, and it’s convenient. Plus, the fact that most people don’t have $3,000 or so to go out and buy a water system, but they can afford $30 a month buying water.”

Dollars and sense
As if he needs to remind anyone, Gabriel says everything in Hawaii is expensive. He tells an amusing story about a military homemaker who called him one day to say she had finally found something on the island that was cheaper than on the mainland—bottled water.

He said, “I can’t sell water for as high as it is sold on the mainland because the demand here is not as high. Ninety-eight percent of the water in Oahu is drawn from aquifers. The islands are made of rock so it’s kind of like nature’s carbon and it cleans the water so it tastes pretty good.”

One of the features that makes Hawaii unique is that it’s a state made up of seven different islands (Oahu is home to about 80 percent of the state’s total population). Naturally, each island has its own set of water qualities and needs. Technically, Hawaii is classified as a “non-chlorinated” state but local water agencies chlorinate sporadically when bacteria amounts reach certain levels. He adds that this can “create havoc” for a dealer who bases his equipment purchases on non-chlorinated water.

On the other hand, Hawaii has been progressive in protecting its groundwater sources, Gabriel says. At about the time that Aloha Water was launched, the state responded to finding over 250 chemicals and pesticides in many of its wells by deciding to burn its garbage and not accumulating it via landfills.

In addition to bottled water and POU, Aloha Water also offers reverse osmosis (RO) sales and rentals, carbon filtration, coffee service, ultraviolet light, among other technologies. While its customer base is 85 percent residential, the company’s revenue base is 30 percent commercial/industrial.

Systems of choice
Gabriel’s RO unit of choice is manufactured by Hydrotech, while he relies on Pentair/Fleck for his water conditioners. He claims that Hydrotech’s membranes will last between seven and eight years with regular maintenance. Economy RO units (not made by Hydrotech) have also entered his product offerings due to increased competition from big-box retailers. Gabriel reviews pricing among manufacturers to try to “keep them honest.”

Almost all customers on Oahu are on municipal water, Gabriel says. Meanwhile, the Hilo (eastern) side of Hawaii’s Big Island is primarily bottled water customers because you cannot drink the water (with catchment systems in use there), and the Kona (western) side uses city water but it’s “terrible,” he says. With municipal water, chlorination, taste and silica are the biggest complaints from customers. Meanwhile, Hawaii’s water is only seven to 11 grains hard.

As one of only three bottled water companies on an island of 850,000 people, it’s easy to understand when Gabriel says: “We are literally busting at the seams.” To keep up with demand, Gabriel would like to move from his 8,000-square-foot building to a larger one. The company has been approved by the Small Business Administration (SBA) for a loan to buy land and build a facility on it. Unfortunately, Gabriel sought a $1.5 million loan and was approved for only $1.3 million two years ago. The land alone would have cost $1 million. He plans to re-submit his plan to the SBA and apply for a $1.5-1.7 million loan after completing the business’ taxes this year. As a result of the delay, he says, “We are not as aggressive in sales as we would like to be.”

Where TV rules
Aggressive is a word that accurately describes Gabriel’s approach to advertising. Claiming to be the state’s only bottled water business owner who advertises on television, he admits to spending $70,000 a year on the big three networks—ABC, CBS and NBC. Aloha Water also sends out promotional clippers as well as mailers. If there are still doubts that Hawaii is affordable, Gabriel points to the price of a half-page advertisement in the yellow pages—$5,600 a month, which ranks either first or second highest in the country, he claims.

Yet, all the right buttons are seemingly pushed at Aloha Water, where they’ve enjoyed growth in double digits every year for the past decade. “I have seen everything with (customers’) families—divorces, death, kids—because I’ve been servicing their units for so long,” he says. “We didn’t have any competition so we kept pursuing it and perfected it.”

Because of this peculiar business environment, Gabriel assures: “We are going to stay independent…because it’s the only way to survive here. Even if I wanted to become a Culligan dealer exclusively at the business size I am now, I would go out of business.”

About four or five years ago, he says, five new bottled water companies entered the Hawaiian market. Only one is still around. “The strong will survive,” he asserts. After hopefully breaking ground on his new building later this year, Gabriel says the next step will be getting into the individual, retail PET bottled water line.

Conclusion
Thinking realistically, Gabriel says that someday an Arrowhead or a Suntory will come along and offer him a can’t-refuse buyout. But at his age, he’s not ready to cash in on a golden goose and money won’t define him. “(My wife and I) have created something that will outlive us,” he says. “If you can go to work and love it, then that’s already being successful.”