Behavior of Silica: Technologies Available & How They Rate

Summary: Silica has always confounded water treatment dealers in how to handle it and greatly reduce the contaminant. As we discover more information about silica due to further studies, though, some technologies have come to the fore. A good place to begin is to examine the chemistry of silica and how it pertains to various approaches available to dealers.

Silica, the second most abundant element, is found in all natural water supplies. Silica chemistry is quite complex, second only to the chemistry of carbon compounds. In water treatment, we’re concerned with silica because of its tendency to form deposits—scale—on surfaces with which it comes into contact. This article describes the behavior of aqueous silica and various water treatment processes used for its removal.

The classic formula of “dissolved silica” used by water treatment engineers has traditionally been written as SiO2. This is because solid silica deposits typically contain a ratio of two moles of oxygen per mole of silicon. Solid silica compounds such as quartz slightly react with water to form silicic acid. The reaction is a depolymerization followed by a hydrolysis, yielding either ortho- or meta-silicic acid (see Figure 1).

With respect to water treatment, the most useful structural model of silicic acid is the “ortho” model (H4SiO4). This model satisfies the tetrahedral preference and predicts the very weak acidity. It also readily explains why silica is highly soluble at high pH (surrounded by OH- ions). In addition to the water molecules that become part of the silicic acid molecule, other “waters of hydration” make the hydrated radius of dissolved silica almost as large as that of sulfate ions. Silicic acid is considerably weaker than carbonic acid.

The Ka—which describes ionization strength of a weak acid—is considerably smaller for silicic acid than for carbonic acid. Ka is a constant used to determine how much of an acid is ionized and how much is present in un-ionized, or molecular, form. Where an acid has more than one ionization state, the constants are designated K1, K2, etc. With respect to carbonic and silicic acids, this is reflected as follows:

At pH greater than 10, silica is present in its monomeric form—a chemical compound that can undergo polymerization—as silicate ions and is quite soluble. As pH decreases, monomeric silica ions condense into complex silicates by sharing hydroxide ions. This reaction is known as polymerization and is deliberately performed in industry to form complex silicates and silica gels for various purposes. The general formula for polymeric silica is (SiO3)n (see Figure 2).

‘Pure silica’
Many years ago, a water treatment company on the West Coast that specialized in ion exchange systems hoped to determine the relative affinity of strong base anion (SBA) resin for “pure silica.” Fearful that manmade silica might not react the same way as “natural” silica, it decided to start with pure “natural” silica. The company collected natural volcanic water that contained about 65 parts per million (ppm) of molybdate reactive silica* and deionized it using a two-bed deionizer with a cation exchange bed followed by a weak base anion (WBA) resin and degasification. The fresh solution contained 65 ppm of reactive silica and almost nothing else except traces of carbonic acid. About a week later, the company re-tested the solution and found the reactive silica to be less than 10 ppm .

Where did all the silica go? At first, the Los Angeles water company thought it must have precipitated, but the water was crystal clear. It then “digested” the sample by adding sodium carbonate and heating. A re-test showed 65 ppm of silica. Whether silica precipitated or polymerized is uncertain, but clearly silica was unstable in this water.

So, what’s the solubility of silica? The classic silica solubility data leave a lot to be desired. The well-known curve published by Dupont and others includes a disclaimer about accuracy. There are numerous well-documented examples of silica concentrations much higher than the limits shown on the classic graph (see Figure 3).

Methods of silica removal
Although conventional coagulation and filtration is effective to remove most (if not all) colloidal silica, this is usually a small fraction of the total silica in natural water supplies. Conventional precipitation technologies are reasonably cost efficient to achieve partial removal of silica. Drawbacks to precipitation are numerous. Precipitation of silica is a messy, time-consuming process and can be difficult to accomplish without upsets. Where “complete” removal of silica is required, various combinations of reverse osmosis (RO) and/or ion exchange processes are used. The current state-of-the-art technology includes both multiple membrane and multiple ion exchange steps, and can produce “reactive silica” concentrations in the neighborhood of 0.1 parts per billion (ppb).

Silica almost never precipitates as “SiO2.” Silica scale almost always contains a divalent (or trivalent) cation. Although calcium silicate is quite insoluble, this compound doesn’t form rapidly except at very high temperatures. Although aluminum salts can be used to precipitate silica, the consequences of leaving a substantial aluminum residual in the product water make this process undesirable. The conventional method of precipitating silica has always been co-precipitation and/or adsorption with magnesium salts.

Membrane systems
RO systems can also be used to reduce silica concentration. Although cellulose acetate and early thin-film composite polymers only provided moderate silica rejection, newer polymers reject silica quite well. The mechanism of removal is probably by “hyper” filtration, but is also related to the degree of ionization of the silica since it’s more completely removed at a high pH. Silica is concentrated in the reject stream and silica solubility can be an important consideration in the design of RO systems. RO systems are currently unable to achieve complete removal of “reactive silica” as ion exchange, but are far better at removing various forms of “non-reactive silica.”

Electrodeionization is a technology utilizing electrodialysis stacks with narrow water flow channels filled with ion exchange resin. Ions are pulled out of the water channel into the adjacent concentrate channel by electricity. Since silica is weakly ionized, a higher current density is needed for a high percentage of silica removal. This process is currently more expensive than RO for bulk removal of ions and suffers the same inability as ion exchange to remove “non-reactive” silica.

A seldom-used ion exchange method of silica removal is the anion “desilicizer.” This device consists of a strong cation exchanger in the sodium form (a water softener), followed by a strong base anion exchanger in the hydroxide form. There are not too many desilicizers around anymore. They have most of the disadvantages of a demineralizer and few of the advantages; however, they do remove silica along with the other anions (see Figure 4). 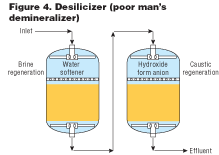 Over the years, more than one engineer has wondered if it might be possible to operate a desilicizer at a very small caustic dose (or perhaps brine plus caustic) and use the anion resin as a dealkalizer while still removing some silica. This would avoid the excess causticity created by the complete anion exchange for hydroxides.

One resin manufacturer tried this with a Type II anion resin. The results were quite interesting. As long as the resin had enough hydroxide exchange sites to remove all the anions, silica was well removed. As soon as the hydroxide sites were depleted, the resin dumped the silica. By the time the hydroxide concentration was substantially reduced in the product water, all the silica had been dumped. There was no net removal.

The same dumping phenomenon can also occur in demineralizers, but is less likely because the anion exchanger is seldom operated until every hydroxide exchange site is exhausted. Although silica dumping can and does occur, a substantial concentration of silica is frequently found on exhausted anion resins even when no hydroxide form capacity is left. This is probably because the low pH after the cation exchanger restricts the ability of silica to leave the anion resin and re-enter the water stream.

Search for a model
The conventional theory of silica removal by SBA resins as an ion, similar to ions such as bicarbonate, doesn’t fit the observed behavior of silica very well at all. What’s needed is a model that does a better job of explaining observed behavior. Suppose that silicic acid is neutralized by hydroxide form anion resin and isn’t exchanged for other anions. Silicic acid remains ionized, only so long as there are sufficient hydroxide exchange sites available to keep it ionized. Since ion exchange resins don’t react with non-ionized substances, when the pH drops in the resin phase, silica either polymerizes or falls off the resin (see Figure 5). 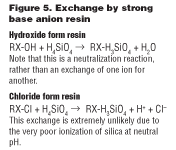 This neutralization reaction requires the exchange site to be in the hydroxide form to capture silica and doesn’t require hydroxide ions to be exchanged by the resin in the way that exchange for other anions occur. This model, although somewhat different than the conventional theory, explains why silica isn’t removed by salt form anion resins.

Silica, once exchanged onto the resin, is still able to polymerize. As the resin exhausts, pH drops and encourages polymerization or dumping. Polymerized silica probably stays on the resin while monomeric silica dumps. In the desilicizer example, the high pH prevented silica polymerization and allowed dumping to occur. Two-bed demineralizers don’t dump silica as easily as mixed beds due to the lower pH at the inlet to the anion exchanger (see Figure 6). 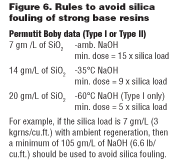 A theory of net excess caustic has been proposed by several ion exchange experts. Excess caustic is needed to reverse the neutralization reaction of silica with hydroxide form anion resin. Excess caustic is also needed to depolymerize silica. Depolymerization must occur before silica can reconvert to silicic acid and be removed from the resin.

Conclusion
Although ion exchange is generally a very fast reaction, the depolymerization reaction is slower. Time and temperature are significant factors in the removal of polymerized silica. One last comment with respect to silica removal from strong base anion resins is the theory of “long on/long off.” The longer silica remains on an anion resin, the more it polymerizes and the longer it takes to get it off. There’s much more to the tale but no room in such a short article. Consult your ion exchange resin provider for additional information.

About the author
Peter Meyers is technical manager for ResinTech Inc., of West Berlin, N.J. ResinTech is an ion exchange resin manufacturer and, through its two divisions Aries and ACM Company, also offers activated carbon, inorganic selective exchangers, cartridge filters and PEDI regeneration services. Meyers has nearly 30 years of experience covering a wide range of ion exchange applications from demineralizers, polishers, and softeners to industrial process design and operation. A paper on which this article is based was presented in a discussion at the International Water Conference in Pittsburgh on Oct. 18-20, 1999. Meyers can be reached at (856) 768-9600 or email: pmeyers@resintech.com