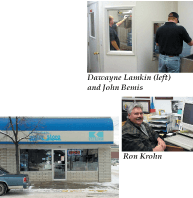 Before he picks up the phone in his office to speak with a reporter, Gary Fetveit, CWS-II, puts down a pile of résumés he has received over the last couple of weeks. For Fetveit and his company—Pettyjohn’s The Water Store Inc., of Kalispell, Mont.—which he co-owns with his brother-in-law, Malcolm Pettyjohn, the task of finding good help has been an arduous one.

In fact, according to Fetveit, not being able to employ qualified people for staff openings—in particular, salespeople positions—was the primary reason why revenues for 2003 were down 10 percent from the previous year: “We just had a lack of personnel to cover all the activity that’s going on over here.” He accentuates this point by stating that the Kalispell region is “a booming area of baby boomers who are wanting to retire and this is one of the places they are going to want to come to because we have skiing, the Glacier National Park, wilderness… It’s just a beautiful area with a big lake.”

…Got to wear shades
And then, displaying his customary optimistic outlook, Fetveit says, “Actually, the outlook for the future in the next 10 to 15 years is quite bright.” How bright? Fetveit says he expects a 20 percent increase in revenues this year over 2003.

The Water Store, founded by Fetveit’s father-in-law in 1957, offers customers many areas of water treatment technologies/products such as bottled water, water softening and water purification. In addition, Fetveit plans to explore the possibilities of ice machines, water vending and private label bottling in the near future.

Whereas the original founder of the company began the business out of his home, The Water Store now boasts a 3,000-square-foot facility that houses its showroom, offices, service area and a small bottling plant. More than anything else, the business relies on its water softeners and reverse osmosis (RO) units to carry the load of the company’s fiscal health.

Spreading the word
“People have become more aware of their water than what it used to be,” Fetveit, 49, says. “We spent a lot of years educating people because they used to say, ‘I’ve been drinking this water forever and it hasn’t killed me yet.’ But now we’ve noticed the market is much more aware.” The media, he adds, has been the major reason for such heightened awareness, whether reporting has been good or bad.

As a water treatment dealer with a special emphasis on Kinetico equipment, Fetveit also relies on ultraviolet lights from Trojan Technologies and Aquafine as well as Ametek filters. Meanwhile, bottling products are purchased from Sun Pacific and Sunroc (which is now owned by Oasis). At The Water Store, being flexible to meet customer needs is job No. 1, Fetveit says: “To be here and away from everything, we have to be pretty diversified and try to get the products needed in our area.”

If a manufacturer treats him and the business well, Fetveit is not adverse to paying a few dollars more for equipment to secure that comfort level of trust. “You have to develop a reputation—one people trust, and we’ve worked on that for years,” he continues. “It’s paid its fruits to us.” The Water Store spends very little on advertising—the yellow pages and an occasional spot on local radio or TV. Most business is gleaned from word of mouth.

Even in a relatively small market like Kalispell (population: 65,000), The Water Store can increase its number of accounts from the current number of 4,000, Fetveit says. Its main competition is Culligan and two or three smaller water treatment dealers in the area, but the businesses enjoy a “good relationship” with each other.

Rentals as stabilizer
When all else fails (or at least ebbs and flows), equipment rentals—including RO, filters and filter housings—serve as the company’s revenue backbone. It offers stability and takes some of the pressure off the sales staff, Fetveit says.

The Water Store stakes 75 percent of its business in the residential market while the balance is strictly commercial. He says about half his customers are on private water (wells) with the other half on municipal water. According to Fetveit, who studied chemical engineering at Montana State University for 2-½ years, water quality problems facing municipal customers are mostly related to hardness. Total dissolved solids, however, are relatively low at 220 parts per million. Private water problems range from manganese, iron and bacterial iron to alkalinity and silica.

Montana’s topography is also a concern for water treatment dealers as troubles with runoff cause contamination in some wells. Other matters of keen interest include fluctuations of iron concentrations in wells as a result of water tables going up and down, glacial silt problems, and the mineral base varying due to the mountainous region.

In the past decade, Fetveit says, nitrate levels increased in the valley and some wells have almost exceeded the U.S. Environmental Protection Agency maximum levels. This is due to years of farming in the area, which has caused some chemicals to seep into the aquifer. Other local industries include cattle, timber and even an aluminum plant.

Fight over septic tanks
But perhaps the biggest issue on Fetveit’s plate—along with all Montana water treatment dealers—is the water industry’s battle against the state’s Department of Environmental Quality over septic tanks. Fetveit says he has found helpful support from the national Water Quality Association (WQA). The business has been a WQA member since its inception in 1957. Fetveit and Pettyjohn bought out the latter’s father in 1991, and have owned the shop ever since.

Montana has a “loose state association,” Fetveit says, but he plans to establish a website presence and “get it solid again.” He serves as the de facto leader of the movement to restore a state association. In the mid-90s, there was an association with about 30 members but it shut down when support and consequently dues waned. “The septic tank issue has brought it (state association) to the forefront and I’m going to use that as a catapult to get everybody back together again,” he says.

First things first, Fetveit has specific goals for the business, and his five-year plan includes entering the private label water niche. If nothing else, he would like to make his father-in-law proud by taking the business to “the next level.” Fetveit explains, “He only had an eighth-grade education yet he managed the business as well as he could. I feel a little pressure to succeed and take the business to a higher mark since he gave me an opportunity when I needed one.”

Conclusion
With growth inevitable, Fetveit foresees expansion to the point where more space will need to be added to the current office building. To this end, he even contemplates one day buying nearby, independent water treatment dealerships. Of course, he also points again to the hope to find “stable and knowledgeable help, in particular sales.” If he had his druthers, The Water Store would have 10 to 12 employees by now. With an apparent uptick in the economy recently, the urgency has been heightened and it’s noticeable in Fetveit’s voice.

“There’s not a big enough work-force pool plus there are a lot of people working around here (in an area with low unemployment),” he says. “There’s just not a lot of freed-up people who would take on a commission-type job… I’ve had to go to base salary plus commission to drum up enough interest to get any reaction out of anybody. The days of commission-only aren’t there anymore.”