The Waters of Jamaica 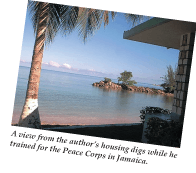 Summary: According to PAHO’s Evaluation 2000 report, 80.52 percent of Jamaica’s population had access to drinking water, second from the bottom among the eight largest islands in the Caribbean. A “2002 Water Poverty Index,” comparing 147 countries, ranked it 73rd overall—again, second to last among those same islands (resources, 79th; access, 45th; capacity, 59th; use, 122nd; environment, 124th). Needless to say, there are challenges. 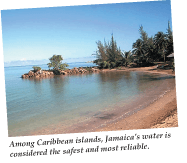 Jamaica, the third largest island in the Caribbean, is blessed with abundant water supplies compared to several other island countries.

Discovered by Columbus on his second voyage in 1494, it’s a tropical island located approximately 90 miles south of Cuba, and comprises 4,411 square miles with a population of approximately 2.7 million inhabitants. The capital, Kingston, is the island’s largest city with a population of approximately 700,000. Located on the southeast coast, Kingston has one of the largest and most active harbors in the Caribbean region. Major tourist areas are located on both the north (Ocho Rios and Montego Bay) and west coasts (Negril). Agriculture remains a major employer and is responsible for significant export products. Major crops include sugar cane, coffee (Jamaica Blue Mountain coffee is considered perhaps the world’s finest) and bananas. Other industries include bauxite (aluminum ore commonly formed in deeply weathered rocks) and—naturally—tourism.

True blue
While limited, Jamaica can be justifiably proud that, among the Caribbean countries, its water supply is considered the safest and most reliable. Jamaica has been free from major outbreaks in waterborne diseases such as cholera, Giardia and hemithaloids. Residents and tourists can be confident that the water from essentially any potable supply is safe and disease-free.

The topography of the island is dominated by the John Crow and Blue Mountains located in the eastern parishes of Portland and St. Thomas, respectively. These mountains, which are primarily preserved by a national park, rise in elevation from 3,281 to 7,382 feet—1,000 to 2,250 meters. This mountain range, volcanic in origin, is sufficiently high and brings significant rainfall to the eastern and northern portions of the island. The average annual rainfall along the northeastern slopes of the Blue Mountains ranges from 118 to 197 inches (300-500 cm) while the southern coastal plains generally get less than 59 inches (150 cm). The island-wide average rainfall is nearly 80 inches (200 cm). Jamaica is regularly subject to tropical storms and occasional hurricanes, which are characterized by intense rainfall capable of causing localized flooding. 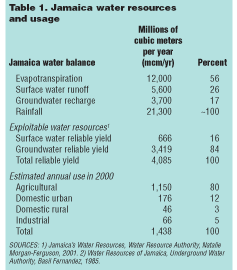 The water balance for the island is shown in Table 1. As shown, the estimated usage in 2000 was just under 1,500 millions of centimeters per year (mcm/yr). This represents only about 7 percent of the annual rainfall. In terms of usage, agriculture dominates the water consumption with current demand taking 80 percent of water produced. In terms of supply, groundwater makes up the greatest reliable resource. This occurs primarily because of the hydrogeology of Jamaica. Much of the island consists of limestone (60 percent) with high permeability and significant karstification, the solution of rocks (typically limestone) by rain water, producing fissures, sinkholes and underground streams and caverns.

Another 15 percent of the land mass consists of alluvial deposits, most of which contain significant groundwater aquifers. The balance of the land mass, primarily the mountain ranges, is volcanic in origin and not suitable for storing water. Natural springs are common along much of the island including the aptly named town of Porous, where heavy rainfalls can lead to emergence of surface water in nearly any location. While there are a number of rivers and streams, as shown by the large surface runoff, the utilization of this surface water supply hasn’t been extensively practiced. The generally available good quality groundwater has been exploited to a larger extent.

Typical water quality for both groundwater and surface water is shown in Table 2. 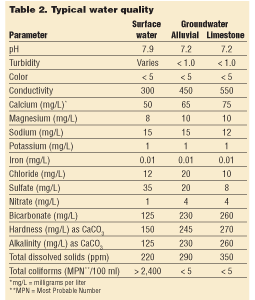 The relative good quality, reliability and advantage of not having to treat groundwater (except for chlorination) have led to it being the primary water supply for Jamaica. It’s estimated that approximately 90 percent of the current usage is groundwater.

Water quality
One developing concern for Jamaica is the potential for contamination of its groundwater resources. In the past, the prevalence of individual, onsite sewage treatment systems (septic tanks and adsorption pits) has lead to areas with nitrate contamination. Currently, while nearly 100 percent of the population is served by treated drinking water, only about a quarter of the population is connected to municipal sewage systems. As Jamaica develops, modern sewage treatment systems are being installed and groundwater systems are routinely monitored for evidence of contamination by nitrates, phosphates and other contaminants. Another concern in the coastal areas is seawater intrusion caused by over-pumping of the aquifers. This situation is being addressed by an established permit system, which regulates the groundwater withdrawal to control over pumping.

As seen in Table 2, water can be classified as hard to very hard with the primary constituents being calcium, magnesium and sodium bicarbonates. There are generally low levels of chlorides, sulfates and nitrates. The high hardness isn’t unexpected considering the extensive limestone geology of much of the island. Occasionally, one finds a spring water supply with soft water but most Jamaican waters can be classified as hard.

Water treatment and supply
For groundwater sources, treatment consists of chlorination. For surface supplies, the treatment process consists of filtration and generally slow sand filtration followed by chlorination. The public supplies are developed, owned and operated by either the National Water Commission (NWC) or local parish councils. Jamaica is comprised of 14 parishes, which are the local governing body roughly equivalent to counties in America. Administratively, parishes are run by the local Parish Council with councilmen and women elected in local elections. For the most part, the councils are responsible for the majority of the smaller capacity rural water systems on the island. These are typically small capacity wells, entombed springs or water catchments, which are treated with chlorine and pumped and/or stored for local use. 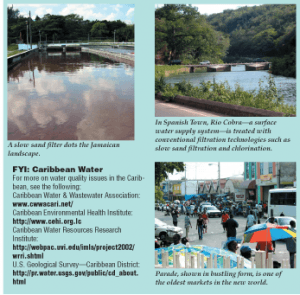 The NWC as the name implies is a quasi-government agency, which owns and operates larger water systems in Jamaica. It’s set up as a statutory agency and falls under the providence of the Ministry of Water and Housing, which is a national agency; however, it operates under its own budget and performs similar to a regulated water utility in the United States. There are a few private water suppliers providing public water, all of which are small in capacity.

Meeting the criteria
Whatever the management and ownership, the water is required to meet Jamaica’s Water Quality Criteria, which generally conform to World Health Organization (WHO) standards for purity. Water is routinely tested by the water provider and local health inspectors. The Ministry of Health—which is charged with developing the water quality standards and the monitoring of water quality—performs water testing in its environmental health laboratory, which is a part of the National Health Laboratory in Kingston.

Most industrial uses, including hotels, beverage bottlers, breweries, power generation stations, etc., require treatment. Industrial softeners are common as are reverse osmosis (RO) systems. For production of boiler feed water, RO/DI (deionization) systems are also common. Most of these industrial systems—especially the larger ones—are sourced either through the United States or the United Kingdom.

There exists in Jamaica a handful of companies capable of providing water treatment equipment and support services such as ion exchange resin, RO membranes and water treatment chemicals. When larger projects are required, these local companies may partner or represent larger equipment suppliers from outside the island. Most large projects such as power plant or industrial boiler systems have high enough visibility to be identified and pursued by American or multinational water treatment companies.

Conclusion
For the residential market, household water softeners are available and typically standard in the luxury custom home market. These systems are typically imported into Jamaica by U.S. suppliers. For the average Jamaican, water heaters and washing machines are luxuries, so the market for household softening hasn’t developed beyond the luxury home market. With an average air temperature of 82°F (28°C), water heaters or home heating systems aren’t common. Jamaica is blessed with abundant water supplies, and the government of Jamaica—through the NWC and various parish councils—has endeavored to provide safe drinking water to most, if not all, of its citizens and visitors.

About the author
Dick Chmielewski is currently serving a term as a senior sanitary engineer with the U.S. Peace Corps assigned to the Ministry of Health in Kingston, Jamaica. He is a licensed professional engineer in the state of California and has more than 25 years experience in the water industry, specializing in membrane systems and ion exchange technologies as well as conventional treatment systems. Chmielewski is working on water quality issues as well as design and inspection of wastewater systems. He previously worked for ResinTech, Hydranautics and Memcor. He can be reached at email: chmielewski@moh.gov.jm