Summary: Recent advances have led some to believe filter applications in household refrigerators will soon be a boon to the POU market. This increased emphasis on behalf of consumers for microbiologically safe water and improved designs can only help the industry as a whole. 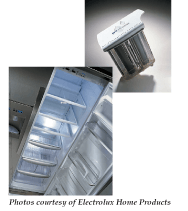 Afew years ago, a major multiclient study was carried out on point-of-use/point-of-entry (POU/POE) products and markets. One of the striking omissions of this otherwise useful report was the absence of information on filters now pervasively installed within household refrigerators. This oversight wasn’t unique in those days as even major consumer companies ignored this rather subtle segment while formulating their marketing plans. Such is no longer the case. Refrigerator POU filters are now a major segment of the total consumer water filtration business and nobody in their right mind can afford to ignore this rapidly growing business.

Background and history
Ice makers have been a part of the North American refrigerator for decades and dispensing chilled water is also a feature that’s been around quite a long time. The former method used to protect this water from rust, sediment, chlorine, taste, and odor problems was usually use of an in-line filter installed behind the refrigerator on the water line coming into the unit. Indeed, this type of filter is still widely found collecting dust behind older refrigerator models and hundreds of thousands are sold each year for this application.

The “back-of-the-box” location of this in-line filter nearly guaranteed that, once installed, these filters were immediately forgotten and changeout was irregular or non-existent in most homes. These filters were primarily provided as an aftermarket product and usually by third-party installers rather than the refrigerator manufacturer. Hence, while there may be nearly 25 million refrigerators operating in North America with some type of ice or water dispensing equipment, the quantity of in-line filters being sold is only perhaps sufficient to correctly service 1 percent of the theoretical market. Obviously, these filters aren’t a great commercial success.

The idea of installing an improved water filter within the refrigerator rather than behind it has been studied for many years, but no manufacturer threw its weight behind the idea until 1995. That’s when Don Coates, an engineer at major appliance company Electrolux Home Products, formerly Frigidaire, started work on the design of a “dripless” filter housing for direct use in the refrigerator cabinet. This filter design eventually evolved to the device shown in Figure 1.

Design considerations
As it turns out, it’s not so easy to design a filter system for a refrigerator because of concerns about freezing water, shattered filter housings and flooded homes. Indeed, there were some previous attempts that led to a disastrous outcome. But Coates and his colleagues worked through these issues and eventually felt comfortable they had a system that worked. What they lacked was a filter, and so they elected to use a combination granular activated carbon (GAC) and hollow fiber membrane filter from Japan.

Toward the end of their development process, they began to realize the Japanese filter didn’t meet NSF/ANSI standards for soluble lead and select organic chemical reduction targets. Nor did it meet consumer cost expectations in North America. State regulators wouldn’t approve the proposed claims for the filter and, in fact, it wasn’t going to be satisfactory due to this and its high price—so a search for an alternative was launched.

The only thing worse than having a filter housing with nothing to put in it is a filter housing that’s tooled and extremely tiny. Not only do you not have a filter to put in the housing, but there’s insufficient space to put what you need into the housing—resulting in a situation not unlike the prince looking for Cinderella with a glass shoe too small for any ordinary woman. To “shoehorn” the filter with all of its attendant health claims (cyst reduction; high and low pH lead reduction; chlorine, taste, and odor reduction; Class I particulate reduction, and much more) into this tiny space and operate it at elevated flow rates is never desirable.

Needless to say, though, this filter did arrive on the market on the appointed date with all of the required properties (i.e., the above claims) and became an immediate commercial success. The resulting surprise about this product led to development of water filtration systems in essentially all side-by-side refrigerators sold by all major manufacturers in the United States by 1999. Today, roughly 30 percent of all refrigerators produced annually have a water filtration system (see Table 1); that is, roughly 90 percent of all side-by-side refrigerators equipped with ice and/or water dispensing systems. This equals approximately 2.8 million refrigerators in 2003.

Almost all of these devices are based upon sophisticated carbon blocks that provide a host of health claims such as mercury, lead, cyst, and organic chemicals reduction, Class I particulate, asbestos, and comprehensive chlorine, taste and odor reduction. A few models have GAC or fiber-carbon powder composites, usually with a reduced set of claims.

(see Figure 2) is the size of these devices and the need to remove the contents of the upper shelf of the refrigerator to gain access to the filter for changeout or handling. For a shorter person with reduced strength in their arms, one can forget about changeout by the homeowner without assistance. Whirlpool, Electrolux, Amana, General Electric, and Maytag all use this approach to some degree.

To eliminate the struggle with refrigerator contents, one manufacturer developed the concept of placing the filter into the grille at the bottom of the refrigerator (see Figure 3). At this location, the homeowner

doesn’t need to remove a portion of the contents of the refrigerator during filter changeout and the unit is in the front so one doesn’t have to gain access to the rear of the refrigerator as with the old in-line devices. Despite increased convenience in some areas, this approach fails some people who may not be able to get on their hands and knees to twist this filter out of its hole. Such twisting has sometimes confounded people  because of occasional “stiction”—the increased adhesion between two parts as a result of a “set” within an O-ring or gasket where the lubricant is forced from the interface over an extended period of time.

The next approach implemented in 2001 was a push-to-eject filter design (see Figure 4).

The filter element consists of dual carbon blocks within a flat, video-cassette size package. This fits into the front of the control cabinet when the refrigerator door is opened (see Figure 5) and ejects at the push

of a button. The system is equipped with automatic shutoff valves so filter changeout is dry. Anyone can push this button and the filter ejects like a video-cassette into your waiting hand. Filter changeout problems are eliminated, but this is a more complex filter housing and design.

Markets and developments
The market for refrigerator filters is difficult to determine in exact terms because the price of the system isn’t calculated separately. By deduction, however, one can determine that these systems have an implied value of $50-80, i.e., subtract the price of the refrigerator sold with and without the filtration system. Replacement filters are sold at prices ranging from $25–50 at retail. Value of the retail market, therefore, appears to be approximately $175-185 million in 2003.

This market is currently confined largely to the higher-end, side-by-side products of the major manufacturers and even smaller brands—such as LG and Subzero—are now fitting filters to their products. Saturation of the market, i.e., all opportunities to sell and install filters—at least in side-by-side units—is expected to be effectively assured by the close of this year. In other words, manufacturers will install systems in essentially all models. Further evolution of the market is confined to refrigerators with water and ice capabilities, which aren’t popular options outside of North America. This steady flow of filtered systems, however, has the potential to directly reduce the number of homes that are candidates for the purchase of other POU products and must be taken into account when calculating future markets for alternative POU systems.

Conclusion
With respect to advances in refrigerator ice and water filtration, the consumer can look forward to improved system monitoring and controls, improved filter designs, and further improvements in the ergonomics of filter changeout. This is a highly competitive field with only a small number of companies serving the needs of a relatively modest number of major appliance manufacturers. It confines OEM activity almost to the sidelines of the mainstream water industry and its hundreds of vendors and dealers. Still, don’t ignore refrigerator filters since they have great potential to influence the POU industry. The segment offers dealers an excellent potential opportunity for aftermarket filter sales.

About the author
Dr. Evan E. Koslow is chief executive officer of KX Industries of Orange, Conn., and a member of the WC&P Technical Review Committee. He’s written over 100 articles and papers and holds over 35 patents. Koslow can be reached at (203) 799-9000, (203) 799-7000 (fax), email: ceo@kxindustries.com or website: www.kxindustries.com