By Nancy Westcott and Randy Navratil

Summary: Well owners are faced with a dilemma when it comes to chemically treating their source of water. Knowing this, hydrogen peroxide is one available treatment that provides many advantages. Some of them are outlined here.

Practitioners and professionals in well and pond restoration, well water conditioning, and public water supply management have typically relied on the oxygenating effects of chlorine to manage bacteria and keep water safe for human and animal consumption. Chlorine has been a highly effective and inexpensive disinfecting agent used extensively in the United States to treat municipal and individual water supplies. It has played a key role in eradicating waterborne-infectious diseases such as typhoid and cholera.

With over 42.2 million people—nearly 15 percent of the population—in the United States using self-supplied water systems, wells frequently have unsatisfactory drinking water due to the odors, discoloration, and/or corrosion or scaling caused by unacceptable levels of naturally occurring bacteria and contaminants. U.S Environmental Protection Agency (USEPA) standards mandate that, in drinking water, iron needs to be less than 0.3 parts per million (ppm), manganese less than .05 ppm, and sulfates less than 250 ppm. Excesses of these components can result in unacceptable taste, staining and other discoloration, scaling and even a laxative effect with sulfates. As effective as chlorine is as a disinfecting agent, it’s only marginally effective in reducing the odors from sulfur or reducing iron bacteria, iron or manganese.

Various oxygen-based systems are used in over 50 percent of European municipal water supplies, where the drawbacks of chlorination have been a public health concern for years. Disinfection by-products such as trihalomethanes (THMs) are created by chlorine’s interaction with organic material. THMs are known carcinogens, which is why the USEPA has spent hundreds of millions of dollars investigating alternative ways to disinfect water. Additionally, free chlorine in water is a primary cause of arteriosclerosis in humans. The chlorine causes fat to form the cholesterol deposits known as plaque that can lead to clogged arteries, heart attacks and strokes.

Effect of anaerobic bacteria on water quality
According to David Hanson in an article that ran in WC&P in April 2001: “Many odors in groundwater are related to bacterial activity. The ‘rotten egg’ odor can be caused by sulfate-reducing bacteria (SRB), which are naturally occurring in aquifers. Some SRBs are anaerobic in nature, meaning that they thrive in an environment without oxygen… Slime formation (from bacteria) is a natural protection against harmful chemicals such as chlorine and acids. Attempts to reduce bacteria with biocides, chlorine, hydrochloric acid, CO2, and hydroxyacetic acids are at best temporary… Iron bacteria attach to areas of high nutrients, i.e., steel casings, pumps and decayed debris from other bacteria. They secrete a corrosive enzyme to process nutrients, and corrosion is often found on metal surfaces.”

In the United States, hydrogen peroxide has been used as a water conditioner on a very limited basis. Recently, however, an increased number of professionals have switched to hydrogen peroxide as the preferred method to manage point-of-use/point-of-entry (POU/POE) systems. Peroxide has gained in popularity because it specifically oxidizes sulfur compounds and eradicates SRBs and iron bacteria without producing toxic byproducts such as THMs. A powerful oxidizing agent—more powerful than chlorine or potassium permanganate—hydrogen peroxide performs its job very quickly, efficiently and completely, and then decomposes into oxygen and water. Extra oxygen remains in the water after the oxidation reaction, which helps to prevent future production of sulfides and other undesirable contaminants by anaerobic bacteria. Chlorine requires lengthy contact with SRBs and iron bacteria to perform the same disinfection as hydrogen peroxide does in seconds.

Hydrogen peroxide combines advantages not obtainable with any other single form of chemical control. It’s cost effective and has specific targets, forming no toxic by-products. It’s safe to work with when handled properly and produces soluble sulfates (and, in some circumstances, thionates) thus avoiding the sludge problem. Hydrogen peroxide has a low freezing point, unlimited solubility in water, and reacts very quickly. Finally, oxygen that remains after the sulfur oxidation reaction increases the oxygen content of water, helping to prevent future production of sulfides by anaerobic bacteria.

Peroxide chemistry
According to Solvay Chemicals Inc. (formerly Solvay Interox Inc.), a U.S. affiliate of the chemicals and pharmaceuticals giant Solvay Group, the oxidation of reduced sulfur compound by hydrogen peroxide is a complex reaction controlled by a number of variables including pH, catalysts, temperatures, peroxide concentration and reaction time. These variables control the rate of the reaction, the consumption of hydrogen peroxide and the end products formed. The variables are interdependent and changing one will affect the others.

The reaction between sulfides and hydrogen peroxide depends greatly on the pH of the solution.

Figure 1 shows that at acid pH, sulfide exists primarily as molecular hydrogen sulfide—H2S that reacts on a 1:1 basis with hydrogen peroxide to form elemental sulfur. This is the most efficient use of hydrogen peroxide.

Regardless of pH, sulfites react with hydrogen peroxide to form sulfates, where:
SO3 + H2O2 = SO4 + H2O

The reaction is fast, requires no catalyst, and uses relatively little peroxide and, unlike systems (that use air), all of the sulfite is oxidized to sulfate.

Mercaptants and disulfides
Mercaptants or thiols are the sulfur analogs of alcohols containing the –SH (sulfhydryl) group. They react with hydrogen peroxide in alkaline conditions to form disulfides:
2RSH + H202 = RSSR + 2H20,—where “R” is a generic designation for any organic compound.

Carrying the reaction to sulfonic acid using a peroxide to pollutant molar ratio of 5:1 is generally enough to control odors. The reaction proceeds best with a copper or iron catalyst in the presence of a chelating agent such as EDTA. The chelating agent helps prevent the catalyst from coming out of solution and increases the pH range over which the reaction takes place. 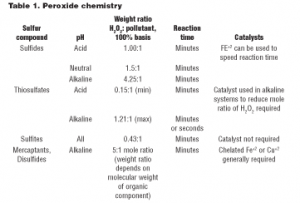 Iron
The removal of iron from potable water sources is aesthetically advantageous since iron can discolor the water, spot laundry and stain plumbing fixtures. In addition, the growth of iron-oxidizing bacteria can result in abnormal taste and odor as well as contribute to biofouling in water distribution systems.

Chlorine
The federal government has mandated that there be a reduction in chorine in drinking water because of the detrimental health effects. Environmental authorities now require dechlorination of waste streams previously considered acceptable and upper limits for chlorine may be in the parts-per-billion (ppb) range. Hydrogen peroxide offers many benefits as a dechlorinating agent. Under the right conditions, the reaction occurs instantly and removes chlorine concentrations that range from ppb up to 1 percent and more. After the reaction, the residual hydrogen peroxide de-grades to water and oxygen. The chlorine gas in water rapidly hydrolyzes to hypochlorous acid (HOCl), which in turn ionizes to the hypochlorite ion (OCl):

The reaction between hydrogen peroxide and hypochlorite takes place so rapidly that other organic or inorganic compounds, including peroxide decomposition catalysts like iron, have no negative effect.

Bacteria reduction
The detrimental bacteria such as iron bacteria and coliform bacteria, which form in wells, are typically anaerobic. Anaerobic bacteria prefer areas of low oxygen such as low permeable areas of aquifers, sumps beneath screens in wells, or beneath large areas of scale. Anaerobic bacteria will die in the presence of excess oxygen provided by hydrogen peroxide. Additionally, the rotten egg odor in the water resulting from these bacteria can be eliminated using hydrogen peroxide as noted above.

From time to time, it may be desirable to use hydrogen peroxide to decontaminate the entire well because some of the odor-causing bacteria also produce sulfuric acid, which will corrode the pump in the long run. Some of the iron bacteria can also produce a musty, fishy or oily smell in the water. Additionally, slime—a mass of the bacteria all living together—can line the well and enter the household water stream with very undesirable effects. Batch treatment of the well with hydrogen peroxide not only rids the well of the odors from the sulfides and bacteria causing it (including slime mass), it also leaves behind a residue of excess oxygen than helps prevent future anaerobic conditions.

Setting up a POU/POE system
The system is very simple and can be used with well water or to condition municipal water at point-of-use/point-of-entry (POU/POE). Small amounts of food-grade, NSF-approved hydrogen peroxide are added to the water intake line by an electric injection pump just before the pressure tank. Hydrogen peroxide is just an ordinary water molecule with an additional oxygen atom temporarily tacked on. It’s this extra oxygen atom that’s the active ingredient in the system. Whenever the water pump switches on, the hydrogen peroxide injector pump is activated too, adding hydrogen peroxide to the incoming water stream from a plastic reservoir at a rate of about 25 parts per million (ppm). The homeowner must check the tap water with specially designed test strips occasionally to make sure that the hydrogen peroxide is present at the right level. The injector pump is fully adjustable to allow delivery of more or less peroxide as needed. The homeowner may want to consider a spin-down filter to trap any iron sediment. When the peroxide is applied throughout the entire watering system—with a reading of 25 ppm at the tap—all of the water should be free of odors, rust, chlorine, SRBs and iron bacteria. Installations cost from $600-750 and customers can operate them at about $150 per year.

What do the practitioners say? Dave Klang, past president of the Iowa Well Water Association, changed completely from chlorine-based water treatment systems to hydrogen peroxide systems over three years ago. He had been pretty frustrated with having to replace wells and pumps damaged by chlorine tablets. He says, “The chlorine pellet delivery systems constantly break down. Further, the pellets don’t fully dissolve, leaving the pump encrusted in corrosive chlorine. After a few years, you simply have to throw the pump away. The chlorine doesn’t get rid of the sulfur smell, which is a big problem here in Iowa. Since we have changed over to the hydrogen peroxide systems, I won’t sell anything else. I am able to guarantee the results. In the 150 installations we have made to date, we do not have one single return.”

Conclusion
Hydrogen peroxide combines advantages not obtainable with any other single form of chemical control. It’s cost effective and has specific targets while forming no toxic by-products. It’s safe to control when handled properly. Hydrogen peroxide has a low freezing point, unlimited solubility in water and it reacts very quickly. It can be used as a biocide for SRBs and iron bacteria and a dechlorinator. Finally, oxygen that remains after the sulfur oxidation reaction increases the oxygen content of water, helping to prevent future production of sulfides and other undesirable chemicals by anaerobic bacteria.

About the authors
Nancy Westcott is president of New York City-based GoatThroat Pumps, a manufacturer of a unique hand pump, and works closely with hydrogen peroxide system installers. She can be reached at (212) 255- 6964, (212) 243-6070, email: pr@goatthroat.com or website: www.goatthroat.com

Randy Navratil is national sales manager for D. Kennedy Inc., of Belmond, Iowa, a distributor of hydrogen peroxide injection systems for residential and livestock use. He can be reached at (515) 733-5053, e-mail: rnavratil@iowatelecom.net or website: www.balancedforhealth.com