The World Wide Food Expo (WWFE) featured professional workshops for route dealers including “Building an Effective Route System,” “Creating a Selling Machine,” and “Route Selling the Old Fashioned Way.” These titles may suggest that nothing has changed in the bottled water route business. But that would be wrong.

From walking the show and talking with exhibitors, the main subject was change. While wholesale sales of bottled water surpassed $7.7 billion, a 21.3 percent increase over 2002, the growth of small-package products sold at retail far outstripped the growth of bulk-delivered bottle water sales. 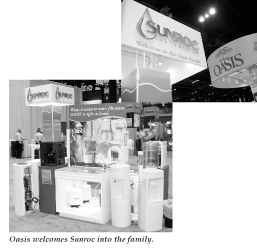 Oasis Corp., founded in 1910 and based in Columbus, Ohio, employs 1,000 people worldwide with annual gross sales in excess of $175 million. Its first major acquisition of a water cooler competitor was Addico Products of Canada in 2000. Sunroc, formed in 1922, is based in Dover, Del., and has 300 employees with annual sales of $50 million. Oasis will continue to manufacture Sunroc brand water coolers from the Dover plant “at least for now,” said Robin Householder, Oasis director of sales and point-of-use (POU) products.

“Now, we are the only U.S. manufacturer,” claimed Householder. “The residential delivered bottled water business doesn’t seem to be declining as rapidly as the equipment rental business. As more and more consumers elect to purchase low-cost, Asian-made coolers, they will still need a supplier for 3- and 5-gallon bottled water.”

Householder believes delivered bottled water will survive, especially in commercial situations where there’s no available plumbing. At the same time, on both the residential and commercial sides, Householder sees POU systems growing in popularity due to people’s interest in saving money: “Commercial use of POU is growing faster than residential use as the cost, convenience and bottle storage issues are very much in favor of point-of-use over bottled water.”

Rentals: a sunset industry?
Meanwhile, “The proliferation of inexpensive imported coolers (including some priced under $100 at retail) is threatening route dealers’ equipment rental business,” said David Carlile, of Water Factory Systems—a division of CUNO Inc.—based in Irvine, Calif., and a manufacturer of POU systems. The company offers dealers a choice of undercounter, inside-of-cooler, and back-of-cooler POU systems including technologies such as reverse osmosis. Unlike Oasis, it doesn’t manufacture water coolers.

“We’ve seen $90 water coolers at Home Depot and Target,” observed Carlile. “So more and more, consumers will choose to buy their coolers rather than rent them from route dealers. These same consumers may have the option of having the water delivered. Or they can buy bulk bottled water at a local water store. Mass retailers are beginning to carry large refillable bottles. One dealer complained that a consumer can buy a refillable bottle for $5, fill it up at a water store for $1, and put it on a $80 or $90 cooler!”

POU’s growing importance
Carlile continues, “In the bottled water industry, dealers are viewing POU less as the enemy, and more as a necessity.” In other words, dealers see POU less as a competitive line item, and more as a sister item. “Dealers today are looking to keep customers on their list and not lose them when they cancel delivered bottled water service. They also want to expand their offerings with other products (POU) that are for lease or sale,” Carlile said.

For many years, some bottled water dealers would quietly offer POU rentals at a below-market price as a “fall back” position when their cooler customers asked to have coolers removed. These dealers would advertise water cooler rentals, but not the POU option.

“Today, POU is no longer a water cooler dealer fall-back. Now it’s part of the menu,” Carlisle noted. “The new marketing strategy is to advertise both, side by side, and offer consumers a choice. And the POU rental prices have come up to market level, making RO or other equipment rentals a true profit center.”

A profitable ‘life raft’?
Another Water Factory System regional sales manager, Chris Goade, shared his experience as a manager of a bottled water route company. “I ran a bottled water company for three years,” Goade said. “In my next job, I joined an equity firm doing buyouts in the point-of-use industry, where I got to make a direct comparison of profit and loss statements: Delivered bottled water business vs. point-of-use rental business.”

Goade soon discovered some surprising numbers: “In the process of analyzing the POU rental business, their profit and loss statement showed they were doing one-third the sales that I had done in my bottled water business. But sales figures are far from the whole story. They also had less than one-third the number of employees and a lot less overhead in warehouse and truck expenses. Now here’s the surprise: The POU rental company showed a profit of twice that of the bottled water company on only one-third the revenue.”

Goade suggested that another reason the POU company was more profitable was it spent less on advertising than the bottled water company, which was forced to replace 25-30 percent of its customer base each year. (POU dealers have a much lower customer attrition rate of 4-5 percent, according to Goade.) While delivered bottled water dealers invest in newspaper, mailing and broadcast advertising on a continuous basis, POU dealers spend much less. This is partially because they’re smaller companies in general. But it’s also because they work referrals efficiently and engage in low-cost guerilla marketing strategies. He believes more bottled water dealers are making the transition to POU, and the trend will accelerate. Goade recommends dealers entering the POU business follow a proven strategy of combining: 1) product sales to consumers, with 2) equipment rentals with service contract to commercial customers.

While a wave of low cost, Asian-made water coolers are replacing more costly cooler rentals, Amphion Water Coolers’ president John Cooke believes there’s still a place for a superior, premium-priced product in the route rental business. The San Antonio-based manufacturer was at the WWFE show promoting its unique Amphion Purtek water cooler, which features a disposable plastic liner for better sanitation than other coolers. A microprocessor replaces the need for a thermostat. An internal 5-gallon reservoir lets customers add another bottle on top for over 10 gallons of water before a bottle change is needed. “Dealers will save on service and maintenance with Amphion’s reality and easy on-site maintenance,” said Cooke. “And Amphion offers the only five-year warranty on the market.”

Conclusion
With a wave of low cost, imported water coolers that retail for under $100, traditional cooler rentals may suffer. Dealers must adapt to the new realities. Some will deliver bulk water for customer-owned water coolers. Some will refocus their businesses on cooler rentals to commercial customers who still prefer the high levels of service and sanitation that only a professional can provide. Some will successfully transition to POU sales or rental programs for their existing customer bases. One thing is certain—change occurs and the industry will need to adapt to it.

About the author
David H. Martin is president of Lenzi Martin Marketing, of Oak Park, Ill., a firm specializing in water improvement and environmental marketing that integrates old and new media. He can be reached at (708) 848-8404, email: dmartin@lenzimartin.com or website: www.lenzimartin.com