The Effects of Raging Fires in California: San Diego Dealers Look to Future 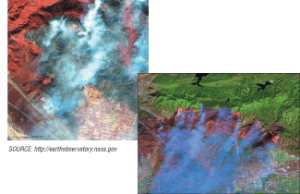 Truth be told, 2003 was a year Californians would soon rather forget. It included a recall election where gubernatorial candidates ranged from pornographers to former child TV stars, massive budget shortfalls due in part to the 2000-01 energy crisis and a freak hailstorm in East Los Angeles that induced then-Gov. Gray Davis to declare a national disaster area. (Dare we mention the trials of L.A. Lakers superstar Kobe Bryant and Santa Barbara’s most famous resident, Michael Jackson.) Yes, indeed, disaster seemed to be an appropriate term to sum up what took place last year.

But nothing could have prepared the citizens of the Golden State for what San Diego/L.A. area experienced in late October. For a harrowing few days, blazes burned throughout Southern California over thousands of acres. The final tally was something very few will be able to forget—fires claimed at least 20 people, destroyed over 4,000 homes, and caused countless amounts of property and environmental damage.

In areas already saddled with water problems, the fires just added to the difficulty people have in treating their water supplies. Two areas that immediately come to mind are Ramona and Julian. In fact, Julian finally removed its boil water alert shortly before Thanksgiving, about a month after the fires did their most damage. Some other municipal water districts were under boil alerts as of early December.

Effects on business
In the meantime, San Diego-area water treatment dealers were left scrambling while trying to keep in touch with their customers and, at the same time, not placing their own employees at risk. For Rich DeAlba, general manager of Culligan Water Co. of San Diego Inc., it was more than the idea of losing customers as he estimates 25 to 30 of his patrons lost their homes in the fires. These included rental customers for portable exchange, bottled water and point-of-use (POU) equipment.

“It’s kind of a two-way street. We’ve been trying to contact (our customers),” DeAlba says. “There are varying situations out there where the house is completely gone and we’re mailing out letters and hopefully they are going to a forwarded post office box. And there are situations where the homes aren’t completely destroyed and people are in them and working on them. And we have had quite a few customers contact us as well.” The letters to customers include a message saying that the company hopes they’re well and asking them to notify the company when service may be resumed.

For Ann Marie Finn, operations manager of Culligan Water Conditioning of North County, of Escondido, Calif., much of her time has been dedicated to filling out lots of paperwork. Twelve to 14 of her customers lost everything, Finn says, and she has submitted those claims to the company’s insurance carriers. Through it all, her customers were grateful to see someone alleviating some of their smaller concerns.

Bottled water loss
One company not so lucky was a San Diego Sparkletts bottled water location that burnt to the ground. Spokesperson Andrea Goodman, of DS Waters, which owns Sparkletts, says the best was made of a bad situation: “We made alternative arrangements so that there weren’t any project shortages, and we could still make deliveries to customers that were in neighborhoods not impacted by the fires.” Sparkletts was in the process of considering different options for building and/or location replacement as of late November, Goodman added. As for the employees, the company has transferred them all to other Sparkletts locations in Southern California.

Along with the danger posed to the general public at large, companies such as Culligan as well as other independent and franchise water treatment dealers also had to consider the safety of their own employees. DeAlba says, “When the fires began on that Monday (Oct. 27), we ran with a skeleton crew in the office. The smoke in some areas was so bad that our drivers could not breathe out there with masks.” By the next day, the smoke had so penetrated the Culligan building that DeAlba had employees working inside with masks who were eventually sent home.

The fire came within five miles of the building and, DeAlba says, there were some harried moments. By Wednesday, the blazes had dissipated enough to where business was back to normal for Culligan. And routes were caught up by the end of the week, he says.

Building strength
“The fires had a two to three-week effect on everybody’s morale,” DeAlba says. “But people re-group, and what doesn’t kill you makes you stronger. That’s probably not a good analogy for some people because there was a loss of lives here, but people seem to pull together when there is a strategy like that. Everybody’s spirits are pretty good right now.”

Finn looks at the situation in hindsight and can’t help but wonder: “Did we do everything for our employees if something like this should ever happen again?” Of course, she hopes to never have to find out. The company’s Nextel radios were “great,” she adds, because many phone lines were down and thus greatly hindered telecommunications between drivers and dispatchers. She concludes, “It was surreal in the tremendous sense of loss.”

Surveying the disaster
DeAlba agrees and recalls looking at the destruction up close. “I’ve never been through anything like that in my life. Had those winds gotten worse, the fires could have destroyed all of San Diego,” he says, without pausing for effect. “I’ve been through tornadoes, storms and a hurricane, but I have never been afraid for my life like I was then. I was standing on my balcony (in Escondido) looking toward the northeast and just watching the fires roll through the hills at about 40 miles an hour. When you drive through the countryside, it kind of takes your breath away.”

Business may never be the same for these water treatment dealers. Finn explains, “As far as businesses, we’re in a totally different world after 9/11. When disasters happen, the magnitude of them interferes with a lot of stuff…You have to be even more sensitive now.”

With so much construction and rebuilding occurring now, DeAlba says there will be plenty of opportunities for water treatment dealers to gather some new business. But he rings a note of warning to potential customers as well as businesses looking to make a quick buck: “If anyone is doing business any differently because of the fires, it’s probably in an underhanded way and we would never do that.”

Finn doesn’t see any shady business dealings taking place in the aftermath of the fires. “The last time we had fires (in the Carlsbad area), there were some contractors—and not just water dealers—who took advantage of the situation, but they (state regulators) have really brought the hammer down on that.”

What to do now
DeAlba’s Culligan location will probably offer discounts to returning customers if they choose to do business with them again, he says. Finn sees the fires as just a culmination of what the state has gone through over the last year: “You almost feel like you are a marked person out here if you’re a businessperson—it’s kind of like, ‘What’s next?’”

For many water treatment dealers and other residents, what’s next consists of rebuilding and a return to some type of normalcy. For others, some cherished things lost will never be able to be replaced. All undoubtedly hope for better things in the coming year.