There’s always an adoption period associated with a new technology. Sometimes, it’s brief and chaotic. In other instances, it’s well planned and orderly. Still, there’s always an adoption period of some kind. When automobiles first appeared on the scene, people didn’t immediately abandon the old horse and buggy to make the changeover. Leaded gasoline was available for years after the last automobile designed to burn it was produced. Vinyl LP record turntables can still be found, even though compact discs and MP3 players have long since replaced vinyl. And has anyone seen a 5¼-inch floppy disk lately?

Just as technology continually evolves with consumer products, it also evolves with the ANSI/NSF Drinking Water Treatment Unit (DWTU) standards and test methods. Along with this evolution and change, as improvements are made, the old technology is eventually phased out—an adoption period.

Cyst test dust reduction
Up until the late 1990s, the best test method for verifying the ability of a mechanical filter to remove waterborne cysts was to use dust of a specific particle size in the range of the cysts as a surrogate. If the dust doesn’t make its way through the mechanical filter, then the mechanical filter is proven to be an effective barrier to protozoan cysts.

Cyptosporidium parvum oocysts are the smallest of the typically encountered protozoa (including oocysts of Toxoplasma, and cysts of Giardia and Entamoeba). Cryptosporidium ranges in size from about 3 microns (µm) to about 7 µm in diameter. Based on this size range, dust in the range of 3 to 4 µm was chosen as the surrogate for these protozoa.

The test method involves pumping a suspension of test dust through the test filter until it’s clogged. At specific points in the clogging process, samples of the influent and effluent water are collected. The samples are analyzed via a laser particle-counting instrument capable of differentiating 3 to 4 µm-size particles from other sizes of particles present in the dust used for the test. For the test system to meet the requirements for a cyst reduction claim, the system must reduce the influent particle count in the 3 to 4 µm-size range by 99.95 percent—or a 3½-log reduction.

Limitations of the method
The cyst test dust method works reasonably well, but there are two major limitations that can make the test difficult to run and limit the potential for the test to be a proper conservative surrogate. The first limitation is that the laser particle-counting instrument cannot identify the source of the 3 to 4 µm-size particles counted. An underlying assumption of the test method is that all particles counted arise from the test dust introduced into the test system. Nevertheless, experience has proven that this isn’t the case.

Many types of filters, especially carbon block filters, can shed particles in the 3 to 4 µm-size range throughout their lifetime. This particle shedding can be especially significant when the filters are first installed, but can also become significant as pressure drop is increased. This particle shedding can lead to falsely high effluent particle counts that make it appear that test dust is circumventing the barrier of the system, when in fact it’s not.

NSF’s testing laboratory has seen this phenomenon first-hand on many occasions. The lab has requirements for effluent particle counts to be sufficiently low during initial system flushing such that the level of particle shedding will not interfere with test results. In some cases, these requirements have led to flushing test systems for several days and repeatedly measuring particle counts in system effluents to achieve the necessary low counts to proceed with testing.

The second limitation of this method is that the same dust used as a source of 3 to 4 µm particles is also used as a “clogging dust” to build pressure drop and bring the filter to the end of its life, as defined by a 75-percent reduction in flow rate through the system. As a result, a measure of performance of the clean system cannot be made with this method. At the beginning of the test, influent and effluent particle count samples aren’t collected until the fourth test cycle. For larger filters, this isn’t as serious a limitation as for small filters. Some of these small filters may have flow rate reduced by 50 percent or more by the fourth cycle, when this first sample is collected. This means that a substantial filter cake may have already built up on the filter, thus improving its performance, by the time the performance is measured.

New methods address tighter specifications
Recognizing these limitations of the test dust method, the NSF DWTU Joint Committee developed two alternate methods for establishing a cyst reduction claim on a filter. The alternate methods were officially adopted into ANSI/NSF Standard 53 in 1999. These methods use either 3-µm polystyrene microspheres or live Cyptosporidium parvum oocysts to overcome the limitations of the test dust method. Enumeration of microspheres or live cysts is performed using epiflouresence microscopy. Both polystyrene microspheres and stained live cysts glow a distinctive color under the microscope when viewed this way, which allows specific identification. There’s no more confusion of particle shedding from carbon blocks with particles that originated from the challenge, as in the test dust method.

Similarly, because the microspheres and the live cysts don’t cause excessive pressure drop to occur when cycled through the system, it’s possible to collect a sample prior to buildup of a filter cake. In this way, clean system performance can be evaluated, unlike the cyst test dust method that builds up a filter cake prior to collection of any samples.

A comparison of the three test methods is contained in Table 1. 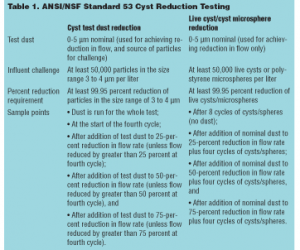 Phasing out the dust
The Foreword of all editions of Standard 53 since 1999 contains the following language:

“It is the intent of the Joint Committee to remove the test dust method as a surrogate for cyst reduction from the Standard after March 2004, a period of five years from the adoption of testing using live Cyptosporidium parvum oocysts and polystyrene microspheres.”

Just as leaded gasoline was phased out, so too will the cyst test dust method for establishing a cyst reduction claim. Just as there was an implementation period for the end of the leaded gasoline era, the DWTU Joint Committee established a five-year period for the end of the cyst test dust era back in 1999. This window of time has afforded manufacturers the ability to modify internal QA/QC—quality assurance/quality control—test procedures as necessary, and make testing and product line certification decisions in light of the upcoming change.

NSF has recently notified all NSF-certified manufacturers that will be affected by this change to the standard. The manufacturers have been made aware of any models bearing cyst reduction claims based on testing with test dust, and the costs to re-test any affected models using either the microsphere or live cyst methods. This early notification will assist them with decision-making and budgeting in regard to their certified product line.

Conclusion
Because of the five-year implementation period for the change, along with the tracking of affected products and notification by NSF, the phase-out of the cyst test dust method from Standard 53 will have a manageable impact on manufacturers. The wisdom and forethought of the DWTU Joint Committee have allowed this process to be an orderly one controlled through awareness and planning, as opposed to a sudden, chaotic change. I only wish that other broad sweeping technical changes could be handled in such a controlled fashion. Does anyone want to buy some old 8-track tapes or movies on Beta video?

About the author
Rick Andrew is the technical manager of the Drinking Water Treatment Units Program at NSF International. He has been with NSF for over four years, working with certification of residential drinking water products. His previous experience was in the area of analytical and environmental chemistry consulting. Andrew has a bachelor’s degree in chemistry and a master’s degree in business administration from the University of Michigan. He can be reached at (800) 673-6275 or email: andrew@nsf.org