The Water Quality Association of Wisconsin (WQAW) hosted its annual convention and trade show on Sept. 26-27. The event was attended by more than 80 water conditioner dealers, installers and those who supply the industry with water-related products. Among seminars featured were: 1) “Fundamentals of Ozone,” presented by WQA educational director Mark Rowzee, covered ozone applications, pH and temperature effects, general equipment requirements, measurement and monitoring, and some myths about its capabilities; 2) Peter Cartwright, a founding member of the WC&P Technical Review Committee, presented: “RO System Design, Operation & Maintenance”—Participants learned to design a reverse osmosis system based on feed water characteristics, install an RO system for any water purification application, and maintenance and trouble-shooting for optimum performance; and 3) State plumbing program manager Lynita Docken kept the audience on its toes by quizzing them on plumbing regulations during her presentation, “Wisconsin Department of Commerce Update.” See the website—www.wqaw.com—for a full review. To get on the WQAW’s mailing list for next year’s convention, call (608) 286-0765 or email: info@ wqaw.com

Ozone News reported highlights of the Aug. 31 board meeting of the International Ozone Association (IOA) in Las Vegas in its October 2003 edition. The IOA’s strategic planning committee reviewed several topics including: 1) the role of the IOA in promoting ozone use, defining how it relates to other oxidants and expansion of its use beyond drinking water treatment; 2) IOA educational tools, and 3) the value of holding a large World Congress in view of current economic situations. New IOA officers for 2004 are: Dr. Joop Kruithof, president; Paul Overbeck (a past WC&P Technical Review Committee member), secretary, and Gilbert Gordon, treasurer. A president-elect will be named at the IOA’s Industrial Applications of Ozone and Related Oxidants seminar in Barcelona, Spain, in March (see Upcoming Events). In addition, a publications committee was formed to be chaired by Dr. Zdravka Do-Quang, of EA3G Group. The next publications catalog will be published during the first quarter of 2005. Finally, the IOA’s Pan American Group initiated three task forces “to help focus activities and promote the use of ozone.” They are the Municipal Task Force (Craig Thompson, chair-man), Food Task Force (Rip Rice, chairman), and Air Task Force (Rip Rice, chairman pro-tem). 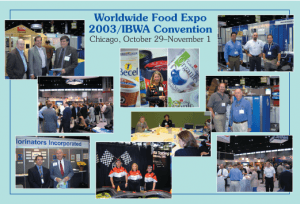