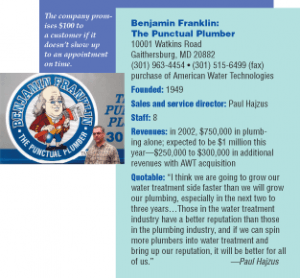 The newest independent water treatment dealer in the Gaithersburg, Md. area is actually… a franchise plumbing company? Yes, you read that correctly. In early October, Benjamin Franklin: The Punctual Plumber purchased American Water Technologies (AWT) and is primed to capitalize on the local burgeoning residential water treatment market and its higher profile since the terrorist attacks of Sept. 11.

At least that’s the way Paul Hajzus sees the scenario playing out. Hajzus is Benjamin Franklin’s sales and service director. In truth and practice, the plumbing outfit occasionally worked on a water treatment application at customers’ homes prior to October, but it finally made a strong commitment to the industry with the AWT purchase.

Exploring new territory
Therein lies the challenge for Benjamin Franklin—spread its wings into a whole new territory and compete not only with franchises such as Culligan and Kinetico but also the other independents—not to mention fellow plumbers. All of them see dollar signs when the pie is a metropolitan area that includes the Washington, D.C., area and its millions of potential customers. Gaithers-burg is about 25 miles from the District of Columbia.

Hajzus’ company was founded in 1949 and operated as a general contractor through the late ’70s and early ’80s. The owner’s son continued running it that way until the company decided to buy into a national franchise, Benjamin Franklin, in 2002. Now, with AWT, Benjamin Franklin offers a full line of plumbing products and water treatment solutions from well work to reverse osmosis (RO).

Hajzus, 38, moved up the management ranks with the company through his decade of service. As he tells it, the migration to water treatment was a no-brainer for Benjamin Franklin. “It was a natural progression that works hand-in-hand with plumbing,” Hajzus says. The company does everything from sewer work to water line work to re-plumbing and, as Hajzus tells it, everything else in between. He continues, “Water treatment just kind of drew us in, especially with the scare of 9/11.”

Renewed interest
Gaithersburg is just a short drive from where one of the planes hijacked by terrorists slammed into the façade of the Pentagon. An image like that leaves a lasting impression on the locals when it comes to security issues and—regardless of the pitch—water safety is a part of that equation. “At our watershed up here in Fredericksburg, they were looking for anthrax not even 30 miles from where our office is in some pond. Right in our watershed,” Hajzus repeats himself for emphasis. “People were very conscious of that.”

“For plumbing, we are in an area where you have to have credentials… Everything gets inspected,” he says. “For water quality in our area, nobody seems to care. Nobody checks; nobody expects it. There is no set standard to handle certain situations.”

“The owner was very particular about how he did his job, and he was very impressed with our plumbers,” Hajzus says. AWT’s owner had designed and patented a new water treatment system and, with the manufacturing part of the business calling his name, wanted to get out of daily operations. So he asked: Why doesn’t a franchise like Benjamin Franklin purchase AWT and its 2,000 customer accounts?

Hajzus jumped at the offer. “Part of Benjamin Franklin’s motto is, ‘We want to grow,’ and the only way you can do that efficiently is through acquisition,” he says. “Water treatment was a logical step, and it’s very closely related to plumbing.”

Turnkey and loyalty
Hajzus already had experience with neutralizers, well pumps, pressure tanks, softeners, treatment systems and RO systems. “We basically incorporated a turnkey business with a loyal customer base. The owner’s customers expected good quality work. He didn’t want to sell it to just anybody; he wanted to sell to a company that could handle it,” he adds. AWT still operates outside of Montgomery County (which includes Gaithersburg) via other outlets, and those locations will eventually be sold to other suitors, Hajzus says.

Three months isn’t much time to make a dent in the water treatment business, but Hajzus has a strategy that begins with re-igniting a relationship with the Water Quality Association (WQA). Hajzus’ company joined the WQA about two years ago but let the membership lapse. It’s going to be an uphill battle, but he’s prepared to tackle all obstacles.

“It’s going to take a year or two to establish relationships,” he says. Hajzus isn’t opposed to re-joining the association for the educational materials since Benjamin Franklin is “big on training.” He adds, “We’ve had the CUNO rep come out and walk us through their water systems.”

The industry introduction
Benjamin Franklin wasted no time in forging new alliances in the water treatment industry. Aside from CUNO, Nelsen Corp. has been a great asset and provides a majority of equipment to the business. Hajzus says: “We’re trying to figure out who is going to be best for us. Nelsen has been very instrumental in helping me.” Benjamin Franklin also works with Aqua Treatment Service Inc. As mentioned, the former AWT owner designed and installed his own ROs, and built them from scratch. Benjamin Franklin will not go that far. Instead, it will use Topway Global’s ROs. In fact, Hajzus oversaw installation of eight to 10 of the units in 2001. Last year, the company expected to install 100 Topway Global ROs.

Hajzus is still adjusting to how water treatment and plumbing can have its own nuances. He explains, “Being a plumber, I understand a lot of it, but there are those little nitpicky details on the Fleck heads and the Autotrols. Most of the (plumbing) stuff I order comes complete. With water treatment orders, if you don’t ask for it, you don’t get it.”

With 95 percent of its business in residential applications, Benjamin Franklin frowns upon retail-type sales, which is partly what AWT did. Still, the company recently bought and installed a few water coolers in a local bank.

Hajzus wants to keep his material costs at 13 percent of the total cost of inventory. He insists, “We will not sacrifice quality of product for price. We are not the cheapest person in town. We charge a fair price but we back it up with warranties, guarantees and quality products. We like distinguishing ourselves by offering products that nobody else offers.”

Viewing the other guys
This last comment leads naturally to the next question of local competition and how Benjamin Franklin sizes that up: “Some mom and pops (operations) do nice work and nice jobs, but most don’t install and they will call us. The biggest influences are the bigger names (franchises). At Benjamin Franklin, we have a franchise to fall back on and a lot of knowledgeable people… and we have service capabilities that even the previous owner wasn’t able to provide. We dot every ‘i’ and cross every ‘t’ on service.”

Acknowledging that big-box retailers will “definitely affect us,” Hajzus says “We try not to sell anything that a customer can find in a Home Depot, Lowe’s or a major department store.” Moreover, Benjamin Franklin changed its product lines to offset big-box offerings because the former couldn’t compete with the prices. But he takes a different view of the real problem facing the water treatment industry in regard to big-box business: “It’s the other water treatment companies and plumbers who are working for the Home Depots and such who are not charging enough for their services that kill us. Those fellows need to be educated as to what it costs to do business.”

The early returns have been kind to Benjamin Franklin and Hajzus. Whole house systems have taken off and become the company’s biggest surprise. Within the first week of AWT’s acquisition, three whole house units were sold. And, since they’re also plumbers, service calls will now include offering water heaters and other related equipment.

Conclusion
Just because Benjamin Franklin is a relatively new presence in the D.C. area, it doesn’t mean expectations are low. Quite the contrary, Hajzus says: “Our whole thing is growth. A $2 million (a year) company with eight plumbers is my goal for the next five to 10 years. Then, we want to open another shop and duplicate those numbers, and as many as I can do before I either die or pull my hair out.”

As such, the company is seeking to branch out within its nearby metropolitan area. He adds, “We want to be noticed and acquire more—especially in the D.C. area—with all the terrorism and things stemming from that.”

To do so, Hajzus knows he’ll need to envelop himself and the company into the water treatment industry and its unique technologies as much as possible. It’s also not lost on him that more training is required. He says, “The short-term plan is to have two of our plumbers trained as CWS (certified water specialists) in six months, and the long-term plan is to have all five as CWS in two years.” Currently, the company has one CWS.

Leveraging a plumbing background, Hajzus is hoping to make the transition into water treatment an easier one with a qualified staff and a wider range of products and services. And with a plan in place that looks equipped for the long haul, it would be hard to bet against him.