A recently recognized outbreak associated with bottled water and the bacterium Campylobacter (pronounced “camp-ee-low-back-ter”) has led researchers to wonder about the microbiological quality of alternative water sources and the possible need for direct monitoring for this prominent pathogen.[1] Campylobacter is the most common cause of bacterial gastroenteritis around the world. Campylobacter causes 5-11 percent of all diarrhea in the United States, more than Salmonella or Shigella combined. According to the World Health Organization (WHO),[2] Campylobacter infections are on the rise in developed countries and the reasons for this are unknown.

Infection usually ensues two to five days after exposure but may take up to 10 days—causing fever, cramps and bloody diarrhea—resulting from invasion of the lining of the small intestine. The organism excretes toxins that damage the gut mucosa. Nausea, vomiting and headache may also manifest with symptoms lasting three to six days and up to 10 days.

About 25 percent of those infected with Campylobacter will have a relapse. In addition, a major concern is the occurrence of chronic sequelae—long-term or secondary health effects associated with previous microbial infections. Campylobacter has been associated with complications such as bacteremia, meningitis, hepatitis, pancreatitis, spontaneous abortion, arthritis, Guillain-Barré syndrome (a neurological disorder) and, in extreme cases, death.

Campylobacter transmission routes are poorly defined. In addition to humans, it’s carried by a variety of animals—cattle, pigs, chickens, birds, cats, dogs, hamsters and turtles—and even flies. Many animals harbor the organism with no apparent signs of disease. First recognized as a foodborne pathogen in 1975, the Centers for Disease Control and Prevention (CDC) reports that Campylobacter causes two million human illnesses, 10,000 hospitalizations and 100 deaths a year. Many more cases are known to occur but are either not diagnosed or reported. Outbreaks are difficult to recognize and cases often appear sporadically with no identifiable common source.

Poultry is the primary vehicle for Campylobacter transmission, where meats are frequently contaminated during processing for sale and consumption. Various studies report that anywhere from 63-100 percent of chickens in the United States are contaminated with Campylobacter. Unpasteurized milk, beef, pork, shellfish, eggs, cheese and vegetables are also identified sources. Drinking water, however, has also emerged as a significant route of infection for Campylobacter.

A waterborne contaminant
Of concern to the water treatment industry is the presence of Campylobacter in streams, lakes, ponds and other source drinking waters. Water has been implicated in numerous outbreaks in developed nations. The first identified outbreak of waterborne campylobacteriosis occurred in Bennington, Vt., and involved about 3,000 people.[3] The source of the outbreak was traced to the temporary use of a non-chlorinated, unfiltered water source. During September 1999, 15,921 persons reported diarrhea after attending the Washington County Fair. The majority of stools analyzed were positive for E. coli O157:H7, a serious and potentially fatal bacterium. Campylobacter was also isolated from ill persons while both organisms were found together in some patients. In the end, infection was traced to fair attendees in 14 New York counties and four states while 65 persons were hospitalized and two died.

In 1996, an outbreak of 2,400 cases in Denmark was traced to groundwater contaminated with a broken sewage pipe. Another large waterborne outbreak of Campylobacter occurred in New Zealand in 1990 where 44 percent of camp attendees fell ill. The source of the outbreak was determined to be due to grazing sheep and cattle on nearby farmland and contamination of spring water following heavy rainfall events. Ultimately, a water treatment system was installed on-site, alleviating further outbreaks. Finland experienced three waterborne outbreaks during 2000-2001—Campylobacter was implicated in all of them. The source of the contamination in two outbreaks was suspected due to groundwater contaminated with lake water and surface water runoff after heavy precipitation. The third outbreak was thought to be due to either groundwater contaminated with lake water or tap water tainted in the distribution system.

The largest multi-bacterial waterborne outbreak in Canada’s history occurred in 2000 due to a treated municipal water supply. The infamous Walkerton, Ontario, Canada outbreak was estimated to have affected over 2,000 residents. Stool analysis implicated both E. coli O157:H7 and Campylobacter as causative agents. Sixty-five persons were hospitalized and six died. A multitude of unfortunate events were identified as factors in the Walkerton outbreak. Manure sampling from the 13 livestock farms within four kilometers of the community’s wells showed that nine tested positive for Campylobacter and two for both Campylobacter and E. coli O157:H7. Heavy rains and flooding contributed to the transport of these pathogens into the groundwater while increased turbidity from the runoff overwhelmed the water treatment system.

Bottled water vulnerability
Campylobacter has been definitively linked to a variety of drinking waters, but surprising is its link to bottled water, a beverage associated with relatively few outbreaks.[1] The U.S. Food and Drug Administration (FDA) describes bottled water as “water that is intended for human consumption and that is sealed in bottles or other containers with no added ingredients except that it may contain safe and suitable antimicrobial agents” (see Table 1). 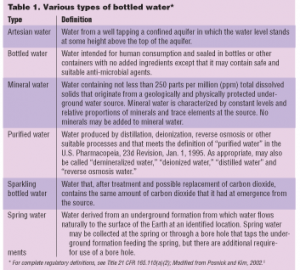 While some bottled water isn’t treated, others are subjected to highly advanced treatment technologies including carbonation, filtration, ozonation, ultraviolet (UV) irradiation, distillation, reverse osmosis, etc. On the other hand, spring and mineral waters are bottled from an underground source that’s assumed to be protected and requiring no further treatment. A lesson we’ve learned from previous outbreaks is that source water protection isn’t foolproof, given the uncertainty of weather and other environmental conditions. Even in the presence of a multi-barrier approach, i.e., source protection and disinfection, a heavy rainfall event can compromise both of these barriers simultaneously. Treated tap water quality also can be questionable due to the highly recognized vulnerability of distribution systems.[4]

Preventing infections
While Campylobacter infections are usually self-limiting, treatment is available (erythromycin and tetracycline are the antibiotics of choice) primarily in cases of invasive infection. Antibiotic resistance of Campylobacter to a common group of antibiotics (fluoroquinolones) is known to be increasing following their use in food animals in 1995. A 1997 outbreak among U.S. Army National Guard troops returning from a training exercise in Greece produced a Campylobacter strain resistant to both ciprofloxacin and tetracycline.[5] Thus, prevention is a key strategy for controlling the number of Campylobacter infections.

Food is the primary transmission route of Campylobacter infections. Therefore, proper hygiene and handwashing, avoiding fecal material from potentially infected animals, washing vegetables carefully, and proper cooking of potential food vehicles are important prevention methods (for other food safety recommendations, see the FDA’s website: www.fda.gov). In addition, military researchers have been engaged in the development of a vaccine for the prevention of Campylobacter infections for several decades, primarily among troops where diarrheal disease causes significant problems. Clinical trials are reported to be under way.

Conclusion
Although very few Campylobacter cells (hundreds) are needed to produce disease in humans, they’re quite sensitive to environmental conditions, freezing, pasteurization, heating, chlorine, ozone, UV and filtration. Therefore, even minimal treatment protocols, if properly functioning, are effective for destroying Campylobacter in water. Point-of-use and point-of-entry (POU/POE) systems, if designed to remove bacterial contaminants, would also be effective for reducing the presence of Campylobacter in drinking water. Bottled water consumers should check the level of treatment used and be informed about potential risks associated with various products.