Mapping the Course of Water Treatment Near Beantown—Atlas WaterSystems Inc., of Newton, Mass. 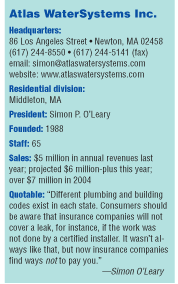 You can say the burgeoning drinking water treatment market found Simon O’Leary, and not the other way around. About five years ago, O’Leary—president of Atlas WaterSystems Inc., of Newton, Mass.—was admittedly living off the “crumbs” from the nearby biotech industry via the various Boston-based companies within a stone’s throw of his business. But instead of adding to his already established office in Newton, a nearby community of about 90,000 people, he went looking for a satellite location.

Next, O’Leary believed an office—strictly devoted to residential water treatment—situated further north of Boston would better serve the tri-state area. So, he began surveying the water treatment landscape in nearby cities and came across a business that seemed to fit his ideal profile. The company was in Middleton, which is near the southern border of New Hampshire. It’s still Massachusetts, but now AtlasWater Systems was closer to potential customers in Vermont and New York. O’Leary approached the business about a possible partnership and it eventually became an equity deal.

“It was like a stepchild for us because we really liked the commercial market,” O’Leary, 41, says, “but we also recognized that we were passing up a good opportunity here.” He now competes directly with other independent dealers as well as local Culligan and Kinetico dealers for the residential market. 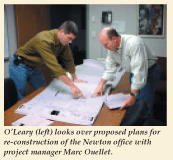 One leads to the other
It didn’t take five years for O’Leary to find out what he had been missing. And the commercial work leveraged new residential accounts. “We have a good residential business because we have such a large number of drinking water accounts in buildings,” he says. “People don’t know where to turn to find water for the home, but when they see us in their (work) office, they say, ‘Let me call them for our home.’”

O’Leary would have been hard-pressed to envision a business venture that’s expected to “easily break” $7 million in revenues next year when he was a nightclub manager working on “a six- or seven-year plan” for his undergraduate degree. And to think it all started with some random, nondescript water filters his friend showed him one day.

“I started my master’s degree and I didn’t know what I wanted to do,” O’Leary says. “A friend of mine called me up and asked me if I wanted to see some water filters.” Through some research, O’Leary’s friend came across a relatively new water technology called “reverse osmosis” (RO) in 1986. Armed with an idea but not a carefully thought-out strategy, O’Leary became the salesperson and his friend became the installer. Predictably, it didn’t work out. Reluctant to drop the water treatment concept altogether, O’Leary “stumbled onto this drinking water market and realized if these people are using bottled water, I could rent them equipment.”

RO in the workplace
Driven to make the plan work, O’Leary and his friend found an RO system and approached residential developers about installing them in their condominiums. As bad timing would have it, this occurred during the condo crash of the late 1980s. Instead, the developers came back to O’Leary and offered, “How about installing them in our offices?” At the time, the developers were using bottled water. But O’Leary’s troubles weren’t over just yet: “We ran into people saying they wouldn’t buy them for $2,000, so we decided to rent them. And the rest is history. Most people know us for our drinking water but they don’t know about all the other stuff we do.”

Besides a drinking water division and its eight installers, Atlas WaterSystems has its residential division out of Middleton, and a high purity and special applications division with 14 people. In all, the company has 65 employees. Also, by mid-2004, a foodservice division will be launched officially, as Atlas WaterSystems already does quite a bit of work in that arena. For now, the other divisions pick up the workload as needed.

“There are some tough health regulations for restaurants,” O’Leary says. “For example, it’s against health code to wipe down a glass after taking it out of the dishwasher. So, either you can chemical-treat the water or you can use water conditioning.” Boston businesses are hamstrung with many foodservice codes, he contends. 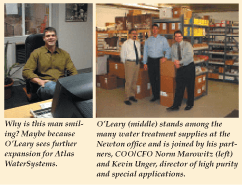 Turnkey is the key
Atlas WaterSystems works with restaurant builders and often installs a plumbed-in water system just for coffee, espresso, ice machines and another one for other water applications. He says it was an ignored segment of the market for a long time. Starbucks is one of his biggest foodservice customers. Most filters in foodservice businesses are sold by original equipment manufacturers (OEMs) so the business owner is also responsible for changing them. As a turnkey operation, AtlasWater Systems is able to sell the filters as well as change them.

Partly because of its reputation as a turnkey business, Atlas WaterSystems has customers in New Jersey (the Newark Port Authority is a customer), parts of Connecticut, Rhode Island, southern New Hampshire and New York. “People don’t know where to turn for a good water company, and there are so many bad ones out there,” O’Leary says. “We’re the only company in Massachusetts that’s a licensed plumbing corporation that installs water purification.”

Among the equipment sold and offered as rentals at Atlas WaterSystems are RO, ozone, nitrogen blankets, resins and nanofiltration. O’Leary deals with Water Factory Systems, Hydrotech and AvantaPure—and Amtrol for its tanks. Most of the equipment that’s stored at the 13,000-square-foot office and warehouse in Newton is devoted to rentals. “We’re looking for the best equipment, not the least expensive,” he says. “If it’s a proprietary filter, you better pick a good (one); if it’s not proprietary, you still have so many to choose from.” And when you have 8,000 customer accounts, that can be quite a decision. Some water testing is done at Atlas WaterSystems but mostly when it’s something basic like a water softener. If it involves equipment and health standards, the company will recommend the customer take the sample to a laboratory.

Most of Atlas WaterSystems’ commercial customers are on municipal water and most residential customers are on private water sources, O’Leary says. Iron, manganese, radon, pH and hydrogen sulfide are the main waterborne contaminants for residential-based customers, while municipal ones complain mostly about taste and odor. Still, the fastest growing segment for the business is high purity/special applications, he adds.

RO as drinking water
“We are a technology company,” O’Leary asserts. “We’re not one company that has a couple of products and says ‘OK, this is what we do.’ We are a company that says, ‘OK, let’s find a new water application and figure out a way that we can save money for people.’” As an example, he uses those people with bottleless water systems. He then proceeds to mention that since Coke and Pepsi came out with RO drinking water under their brand names of Dasani and Aquafina, respectively, “they have helped us to develop RO as a way to drink water.”

In Boston, where the biotech business is a major boon to the economy, a lot of customers need RO deionization (DI) water or pharmaceutical-grade water. O’Leary says, “We are a small player in the under 5,000-gallon-a-day systems. The small biotech companies like a small firm like ours as opposed to the USFilters of the world because they can call the owner and don’t get a 1-800 number.” He pauses, and then adds, “Actually, we have an 800 number, but you can still get the owner.”

O’Leary says AtlasWater Systems will never claim to be the least expensive option to potential customers–but, then again, that’s not the ideal customer they are targeting in the first place. “If it’s all about price, then don’t do anything. That’s the cheapest (way to go),” he says. “News about the industry now travels so fast (Internet), and we should welcome the scrutiny to clean the skeletons out of our closet.”

When asked to embellish on this last comment, O’Leary continues, “I will tell competitors we can all be friendly; but if you take our account and do it illegally, we’re ratting you out to the plumbing department. I have no problem looking them in the eye and telling them that.” He claims a $9-billion-a-year company installs foodservice equipment and it doesn’t care: “I let the state know about it. It may take another 10 years to make the industry respectable, but we’re working on it.”

Conclusion
O’Leary has seen the water treatment industry come a long way since he started with a single water filter in his basement, but he preaches there’s room for improvement. “It has to get more respectable,” he claims. “After all the consolidation, it is still one of the most disorganized, disrespected industries there is. The barriers of entry aren’t great enough, and it’s too important of an issue where it’s not going away.” Finally, he says, “The illegal work kills the mom-and-pop operations.”

He continues that Atlas WaterSystems seeks the “skeptical consumer.” He hearkens back to his early days: “When I had $10,000 to start out, my father almost laughed at me. I thought I was in Fat City. Millions of dollars later, it’s a whole lot more than water technology.”

O’Leary remains optimistic about the company’s future. “We have really perfected the business model, so I would like to see us expand geographically. I would like to have an office in northern New Jersey as opposed to a service repair,” he said, adding he’d like to see this happen within three years. Partly because of the success found within the residential market in recent years, O’Leary’s goal is well on its way to becoming reality.