Supplying the Southwest with Seawater Purification

Summary: U.S. lakes in the arid Southwest are drying up at record rates. With effective technologies at their disposal, the powers that be aren’t taking full advantage of seawater purification (i.e., desalination) technologies as a solution.

Lake Mead is perhaps the most critical reservoir for Arizona, Nevada and California. Besides supplying water to over 200 cities in the southwest United States, it’s a recreation source for 10 million annual water users and a water source for multiple farms and Native American tribes. 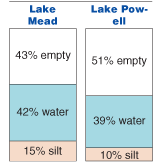 Lake Mead was 57 percent full as of Oct. 3, 2003. Lake Powell, a similar sized reservoir that provides about all the water to Lake Mead, is 50 percent full. Both are at their lowest levels in over 30 years. These lakes have lost at least 10 percent of their capacity from decades of pollutants, debris and sediment accumulation.*

g water in Lake Mead could fit in the designed capacity of all the other Colorado River reservoirs.

Table 1 depicts population growth for each of the seven Colorado River states during the 1990s. By percent growth in the 1990s, the four fastest growing U.S. states were Nevada, Arizona, Colorado and Utah. In the next decade, the seven Colorado River states can be expected to add another 8 million people. In future years, upstream states will be using more river water before it gets to the downstream states.

Trickle-down effect
All five of the Great Lakes were recently at their lowest levels since 1965. Utah’s Great Salt Lake may be dying due to a combination of increased salt levels, excess human use and global warming evaporation. Nevada’s Walker Lake is dying and received no fresh water for two years—2000-2001. Lake Tahoe was recently at its lowest level since 1994. While these lakes don’t provide water for Lake Mead, they do imply something regional or global is impacting water throughout the country.

According to the Union of Concerned Scientists, seven of the 10 warmest years in the 20th century occurred in the 1990s. Last year was the second hottest year ever recorded. Future global warming means upstream vegetation will require more water, and there will be more evaporation from all Colorado River lakes. Plus, more evaporation from hundreds of miles of canals means farmers will need more water to grow an equal amount of crops. Annual non-global warming evaporation from Lake Mead, estimated at 900,000 acre-feet, is greater than the annual water use of Tucson, Ariz.

In the next decade, other needs for Colorado River water will include new water diversions in Colorado, dams and energy development in Utah, Native American water claims, injecting river water into aquifers to prevent subsidence or seawater intrusion, and supplying water to the dying Salton Sea. Moreover, the river tree-ring record—which allows for calculating historic water flow—indicates the 20th century was a wet century, despite 10- to 15-year droughts.

Hitting the law books
Resolution of water shortages is certain to be intensified by litigation. Developers, environmentalists, cities, states, farm districts, golf courses, Native Americans, power companies and others are all candidates to pursue legal action to maximize their allotment of river water. Previous Colorado River litigation has taken over a decade to resolve. 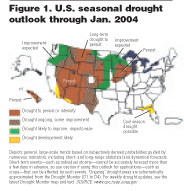 Many politicians aren’t sufficiently addressing the real water shortage that confronts the southwest. As Lake Mead is the key source of regional water, politicians should be ringing alarm bells over water scarcity. In the last 10 years of the 19th century, 100 percent of Colorado River water reached the sea. In the last 10 years, nearly 100 percent of Colorado River water didn’t reach the sea, having been diverted for farms and cities or lost from evaporation naturally or in manmade canals.

The June 2003 issue of WC&P contains a related informative story on western water scarcity by Neil Berlant. He discusses a U.S. Department of the Interior study (see: www. doi.gov/water 2025/) that identifies areas of probable water supply crises by 2025.

‘Drought conditions’
Southwestern water scarcity is also likely to intensity if politicians and the public attribute it to “drought conditions.” Dictionaries define drought as a temporary condition. The southwestern population boom, global warming and some of the other water needs above are permanent conditions.

Water scarcity may soon warrant the status of the top issue in the Southwest. The water shortage situation will not be solved even if there are five consecutive years of slightly more than 100 percent of normal flow in the Colorado River. Such water flows will go to parched soil, global warming, trying to fill reservoirs and states that aren’t using their full allotment of Colorado River water. Southwestern states shouldn’t be anticipating more-than-normal Colorado River water for the rest of the decade.

The solution
On the positive side, there are many engineering and non-engineering options to consider as ways to increase the water supply. Besides over 20 different farm and urban water conservation techniques, decision-makers should be devoting more consideration to seawater desalination as a critical component to any water solution in the Southwest. California desalting can allow more water for inland states. A partial list of potential desalination benefits is contained in Table 2. 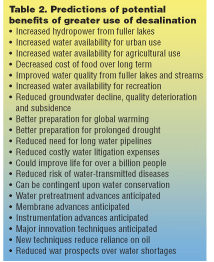 The full measure of combined benefits are often not considered in evaluating the merits of desalination. Instead, the focus is frequently simply on the total cost rather than how that’s offset by these direct and indirect benefits.

Large water districts, states and the federal government should be spending millions of dollars toward desalting research and development. They should be analyzing the pros and cons of potentially viable desalting techniques as well as synthesizing the best aspects of all these techniques.

Seawater desalting costs have decreased roughly 50 percent in the last 15 years. Another 50 percent cost reduction is possible in the next decade. One new desalting technique purports to be 90 percent less expensive than conventional desalting. This technique involves using renewable energy sources to help elevate water to a high level. Then, water purification is facilitated via gravity. This vertical purification technique is estimated to use about 75 percent less land than conventional horizontal desalting plants. Bear in mind, coastal land prices—as prime real estate—are a major factor in desalting costs.

Conclusion
Water is frequently called a “finite resource.” With a little recognition of the cost trends, benefits, and construction options in seawater purification, desalting should be regarded as an “infinite water resource.” Throughout history, cities and civilizations have perished due to inadequate water planning. Without judicious consideration of desalting, the Southwest seems certain to be confronted with more drastic water shortages.

About the author
Mark Bird is a faculty member at the Community College of Southern Nevada. He is a  former federal water planner and author of over 30 water related articles. Bird can be reached at email: mark_bird@ccsn.edu