Nanofiltration—When It Works for the Whole House

Summary: As new homeowners look for ways to treat their household water, nanofiltration—though somewhat unconventional—may be an intriguing possibility. Some of nanofiltration’s  advantages and a brief comparison with other membrane technologies are provided here. 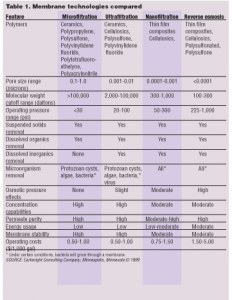 Nanofiltration (NF) is one of the four membrane technologies, which utilize pressure to effect separation of contaminants from water streams. The other three are microfiltration, ultrafiltration and reverse osmosis (RO). All of these technologies utilize semi-permeable membranes that have the ability to hold back (reject) dissolved and/or suspended solids from a water stream containing these contaminants. Each of the four technologies has its own characteristics regarding the kinds of contaminants it will remove (see Table 1). For example, NF rejects ions (dissolved ionic contaminants), but not to the same degree as RO.

The ability to reject ions isn’t a simple filtration mechanism, but a more complex process that’s not fully understood. This mechanism depends upon the valence of the salt ion in question. Recognize that a salt is a compound of two or more ions with an electronic charge. Valence is the number of charges on the ions that form the specific salt, which is not always sodium chloride (NaCl); sodium and chloride are monovalent ions because they have only one charge, whereas ions such as calcium and sulfate are multivalent because they have more than one charge.

A defining characteristic of NF membranes is that they reject multivalent ions to a significantly greater degree than monovalent ions. The specific rejection of ions varies from one membrane manufacturer to another, but a multivalent

ion rejection of 95 percent with a monovalent ion rejection of only 20 percent isn’t unusual for NF membranes. Most of these membranes available today are in spiral wound construction only, although it’s expected that capillary fiber nanofilters will soon be on the market. Figure 1 illustrates NF in terms of its removal efficacy.

Nanofiltration and softening
Water softening generally involves the removal of hardness ions, specifically calcium and magnesium. Because these ions are multivalent, they’re preferentially removed by NF membranes. As a matter of fact, NF has been used for a number of years for municipal softening, particularly in Florida. The advantage of NF over RO, the other membrane technology that rejects ions, is that NF has a higher flux rate. This means that fewer membrane elements are required and it operates at a lower pump pressure—pounds per square inch (psi) or bars—thereby offering savings in operating costs.

The particular advantage of membrane technology in this application is that no chemicals are required to facilitate the removal of hardness ions, whether soda lime for municipal softening or common salt (sodium chloride) in the case of regeneration of typical residential water softeners.

Sodium ion exchange, the standard technology for residential water softening for more than 50 years, utilizes ion exchange resin (in the sodium form) that adsorbs hardness ions from water passing through a bed of such resin, and releases sodium ions in exchange. Because this technology requires sodium or potassium chloride for regeneration of the resin, these are released into the sewer (or septic tank) with every regeneration cycle.

Recent legislation has been enacted to limit these discharges, based upon concerns ranging from excessive chlorides to total dissolved solids (TDS) contamination, and it appears that an increasing number of communities will prohibit the installation of traditional residential water softeners in the future (see Pipelines column in the September issue).

The case for membranes
So, what are the advantages and disadvantages of utilizing NF membranes for residential water softening? Consider the following:

Cons
• Generation of a concentrate stream that must either be discharged or reused
• Designed to either run at full production or to be shut off; cannot accommodate variable flow rates
• Potential of membrane fouling

Typical residential water softening systems using ion exchange resins can operate over a range of flow rates (on demand). As is characteristic of ion exchange resin processes, these systems operate on a batch basis—when the resin approaches its maximum adsorptive capacity, it must be taken off line and chemically regenerated, typically with sodium chloride brine. The regenerant stream along with the ion brine constitutes the waste stream. It’s this effluent, because of its high concentration of ions, that’s under increasingly close scrutiny as a contaminant to the environment.

Some municipalities object to high concentrations of the chloride ion, because of potential contributing effects on soil compaction or federal restrictions on community waste discharged into waterways (particularly in more arid Western states)—and it’s corrosive. Other municipalities are concerned about sodium ion contamination because of perceived health issues. Yet, others object to high concentrations of any chemicals released to their treatment plants because of added operational costs for removal and/or regulatory constraints.

Ion exchange comparison
So how does NF membrane technology stack up against the typical sodium ion exchange resin softener? Traditional ion exchange softeners have been around for a half-century and, as such, are well established, proven and relatively inexpensive. As a “batch process,” traditional softening resins must be taken off line when the resin approaches exhaustion (i.e., the resin’s adsorptive capacity), but this technology works on demand. In other words, it can accommodate any typical flow rate requirement in the house.

By comparison, NF is a “continuous process” in that it continuously rejects the hardness ions and doesn’t require true regeneration. On the other hand, it’s not a demand process; if it’s sized to deliver 10 gallons a minute, it delivers 10 gallons a minute only. This requires that a storage tank and distribution pump be used, preferably with continuous recirculation.

The idea of recovery
Because NF is a continuous process, it produces an uninterrupted waste stream (concentrate) for removal of the rejected contaminants. The percentage of feed water flow that’s pumped through the membrane, which becomes permeate, is defined as “percent recovery.” Obviously, 100 percent minus the percent recovery gives the percentage of concentrate produced. Percent recovery is an important indicator of the “efficiency” of the system and is a parameter that’s typically designed into the system.

Although the efficiency of a resin-based water softener isn’t measured by percent recovery, it’s possible to estimate this efficiency by considering the quantity of water discharged during the regeneration process. A reasonable estimate for the volume of fluid discharged during each regeneration is about 35 gallons. This includes the total lost during the backwash, brining, fast rinse and slow rinse cycles. The total quantity of discharged water on a daily basis depends on the frequency of regeneration, which is almost entirely a function of the hardness in the water. In other words, when comparing the overall efficiency (in terms of wastewater produced), the new “computer controlled” water softener valves generate wastewater as a function of total water hardness, while a nanofilter produces wastewater on a continuous basis. A typical recovery range for a residential NF system would be 60-75 percent.

In terms of degree of removal, it’s safe to assume a typical household water softener will remove hardness to about the same degree as NF membranes designed for this activity. On the other hand, nanofilters will also reduce other contaminants such as suspended solids and multivalent ions (such as iron) in addition to hardness ions. Also, health-related contaminants such as DBPPs (disinfection by-product precursors) will be significantly removed from the water supply by NF. Additionally, NF will reduce the TDS concentration, although not to the same degree as RO.

Most homes are designed to accept traditional water softening systems without any design modifications, although many have the cold water plumbing to the kitchen tap fed with unsoftened water, and virtually all have unsoftened water directed to outdoor faucets. NF would typically require an atmospheric holding tank for the treated water along with a distribution pump. To function more economically, it’s advisable that another storage tank be included for the concentrate stream so that this water can be used to flush toilets and possibly other non-culinary applications. The 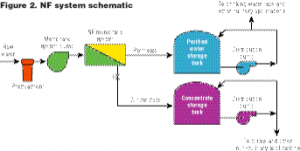 permeate piping should be plastic to avoid possible dissolution of heavy metals such as copper. Figure 2 illustrates a typical residential design for a NF softening system.

Conclusion
It should be obvious that nanofiltration softening systems cannot simply be “dropped into place” in a residence, but require careful planning and are best suited for new construction. Nonetheless, as the advantages of this technology are profound and proven, and with the growing legislation and restrictions against traditional water softeners, it’s only a matter of time before we will see more whole house nanofiltration systems. Stay tuned for future developments as this technology is refined for that application.

About the author
Peter S. Cartwright, president of Cartwright Consulting Co., of Minneapolis, is a registered professional engineer in several states. He has been in the water treatment industry since 1974 and has written more than 125 published papers and articles on related issues. He also has been chairman of several WQA committees and task forces and has received the organization’s Award of Merit. A member of the WC&P Technical Review Committee since 1996, his expertise includes reverse osmosis, ultrafiltration, microfiltration, nanofiltration, electrodialysis, deionization, carbon adsorption, ozonation and distillation. Cartwright can be reached at (952) 854-4911, (952) 854-6964 (fax) or email: CartwrightConsul@cs.com.