Independent Dealers: Making It Work on a Small Scale 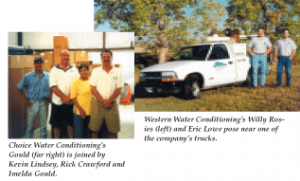 Like many cities across America, the city of Pflugerville, some 30 miles northeast of Austin, Texas, has had its share of economic woes with falling property values and lukewarm sales tax returns. But by providing affordable housing, Pflugerville continues to draw first time homebuyers, making it one of the most popular bedroom communities in Travis County. Just don’t mind the water.

“It is extremely hard water, with 18 to 25 grains of hardness and lots of chlorine,” said Greg Gould, owner of Choice Water Conditioning in Pflugerville.

The need for water conditioning systems sometimes comes as a surprise to those who move to Pflugerville from Austin, where home water treatment systems aren’t as widely used. Still, Gould finds that people are accepting of the need for water softening systems, and he has been able to build his five-year-old independent business the old fashioned way—by providing high quality products and services and avoiding high pressure sales tactics in the company’s door-to-door marketing efforts. “We just basically say we want to leave a card and that we are doing work in their neighborhood and that we would like them to consider us, ” Gould said.

‘Pound the pavement’
The way Gould sees it, independent dealers—especially those who have recently formed their own businesses—often have no choice but to pound the pavement to build their initial business base. Otherwise, consumers will simply opt for the big brand names with lots of advertising behind them. “If we don’t get out there and meet the people,” he said, “they’ll just call the company they know.”

Gould also supplements his company’s door-to-door marketing efforts by networking with local builders, community groups and other influential parties. The strategy works. During the final month of summer when The Daily Texan, a local university newspaper, ran headlines lamenting the lackluster economic performance of Pflugerville and other small cities around Austin, Gould picked up 30 new customers. “And that’s just with two salespeople,” he said, adding that his company employs five people.

Marketing, of course, is only one component of the multi-faceted battle independent retailers face as they compete against the major chains. What ultimately keeps independent dealers in business, according to Gould and other independent operators, is their ability to deliver high quality service, stand behind the work they do, and provide reliable equipment that’s backed up by the manufacturer. Cover all these bases effectively, the theory goes, and independent dealers will continue to thrive despite massive advertising efforts of corporate franchises and big-box retailers, i.e., Home Depot, Lowes, Sears, etc.

Familiar face
Consumers also appreciate the frankness, honesty and accessibility that independent dealers provide. “It’s more of a personal touch and feel,” said Mark Seidenberger, 42, who signed up with Gould last November. Seidenberger, who works for a computer software company, relocated his family from Austin to Pflugerville because he wanted a bigger house, a better school district, and a smaller community setting. But he had no prior experience with water softening systems and wanted someone he could trust to provide the equipment and maintain it.

“With Home Depot,” he said, “you might get it installed, but you’re on your own after that.” And while Seidenberger contacted major water treatment chains to hear their pitch, he felt a little more confident using Gould. Seidenberger met him at a community event in Pflugerville, and felt he was someone he could trust. Seidenberger has been pleased with Gould’s service and has referred him to other homeowners in the city. He also appreciates the fact that Gould avoided a high-pressure sales approach and instead focused on providing quality service.

It’s an approach that’s keeping countless independent dealers in business across the country. “The problem with big manufacturers and big companies is their operation is sales. Service is last. In my business, service is first,” said Gardner Davis, of Gardner’s Water Service in Stagecoach, N, 60 miles east of Reno. He added that service, to his way of thinking, means not only servicing customers who live in remote locations, but thoroughly diagnosing their water treatment problems and providing effective solutions.

“I drive 300 miles a day,” he said. “I do the entire state of Nevada and part of California. I’ve gotten sales in some places because nobody else will drive out there.”

Filling the void
Indeed, for all their name recognition, big companies often won’t service remote locations or niche markets, which leaves the door open for independent dealers to fill the void and build their own customer base. Proper diagnosis and treatment are also critical as big chains don’t have a monopoly on the ability to diagnose and treat water problems.

Ross Derksen, who owns Western Water Conditioning in Gillette, Wyo., previously worked for a major franchise. He felt constrained to use their products all the time. “I built my reputation on building equipment that works,” said Derksen, a 33-year water treatment specialist who formed his own company eight years ago. “I make a point of doing a more complete analysis than many dealers did traditionally. Our approach is to do a water analysis to have a clear idea of what the conditions are, and to sell based on what we recommend.”

Avoiding the black eye
“A lot of companies (in Nevada) are famous for selling a water softener as a cure-all,” Davis said, adding that this approach applies as much to big chains as to big-box retailers, whose sales staffs may not know the details of water treatment. This is ultimately a poor strategy, Davis said, because when these systems fail, it “leaves a bad taste in the mouth of the consumer.” He added, “People who end up buying those systems (from big-box retailers) often end up throwing them away.” In addition, much of his business in rural Nevada is replacing systems that failed.

Derksen has had a similar experience. “The proprietary dealers would like you to think that they have the one best solution for everything, but they don’t,” he said. Often, the independent dealer’s advantage is education, said Steve Scott, owner of Water Wizards in Lindsay, Ontario.

Having a thorough understanding of chemistry and water treatment gives Scott an important advantage in servicing customers in his area, who experience annoying levels of sulfur, iron, hardness and tannins in their drinking water. “It’s very common to have inappropriate equipment put in,” he said, adding that some installers don’t seem to know how to properly apply or sequence equipment. Scott added the province of Ontario has only recently begun to implement basic water standards that are commonplace in the United States. “We still have no educational standards for water treatment professionals like we have for realtors, plumbers and barbers,” he said.

Conclusion
Independent dealers acknowledge that it takes time to build expertise in the water treatment business and learn how to avoid mistakes. They also recognize that if they can provide effective solutions and good service, they can build a following and grow their business base even in the face of rising competition from major franchises.

About the author
Jeff Crider, formerly public relations manager for USFilter Corp., is a Temecula, Calif.-based writer specializing in water issues. He can be reached at (909) 699-7857 or email: jeffreycrider@aol.com.