Valve Interlocks and Actuators in the Water/Wastewater Industries 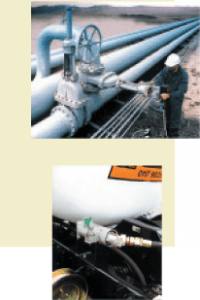 Summary: Whether it’s hydrocarbon processing or water/wastewater treatment, interlocking valves and actuators provide additional operational security for effective plant operation. They’ve become integral components within many water/wastewater applications. The point is underscored here by identifying some of the equipment’s advantages.

Safety interlocking of valves and associated equipment has been a standard procedure in the oil, gas and chemical processing industries for many years. While many processes in these sectors are automated or semi-automated, there are still many situations—such as the changeover of pressure relief valves—where human intervention is essential. As the products being handled are often explosive or highly flammable, the consequences of operator error are potentially devastating. The Piper Alpha oil platform disaster, off the coast of Scotland in 1988, is a classic example. 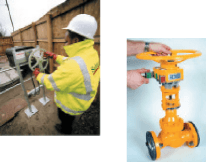 While the possibilities of such catastrophes occurring in the water and wastewater industries are less likely, there are still many situations where the interlocking of valves and ancillary equipment is advisable. Although mistakes may not lead to large losses of life, they can still result in extensive damage to plant and equipment as well as expensive downtime. In the wake of the 9/11 terrorist attacks, there are also added fears for the security of municipal water supplies in many countries. In addition to specific safety and security applications, there are many instances where valve and actuator operation can be sped up, made easier or reduced to a one-person operation.

Interlocks are available for virtually any type of valve used in the water and wastewater industries including lever-, gear- and handwheel-operated ball, gate, check, butterfly and diaphragm valves. Applications are wide ranging and include tanker unloading, control of gear-operated valves in pumping stations, and the safe operation of pressure relief and expansion valves. There are also applications beyond valve interlocking such as operating electrical switchgear or controlling access to potentially dangerous equipment like ultraviolet (UV) or ozone disinfection chambers. Explosion-proof interlocks are also available for use in potentially hazardous areas such as sewage treatment plants where the presence of methane gas can pose an explosion risk.

Key component
A simple interlocking system comprises a specially coded key that must be inserted into a valve to operate it. Under normal-operating conditions, the valve is either open or closed. Inserting the key allows the wheel or lever to be turned. Once the valve is in its new position, the key is locked in place and cannot be removed until the valve is returned to its “normal” working condition. When two valves need to be operated in sequence, two keys are used. The first key is locked in place in the first valve, and is only released when a second key is inserted, allowing the valve to be operated. This frees the first key, which is inserted into the second valve, allowing it to be operated.

Interlocks can also be used with actuated valves. Doing this provides the operator with complete manual control of the actuators, allowing them to be incorporated into a key-exchange interlocking sequence with other valves. For actuated valves, there may be two or more means of operating the valve and all need to be accommodated within the interlock scheme. Due to the high torque applied during valve actuation, mechanical locking isn’t practical and interlocking of the actuator control mechanism is preferred.

A good example of the versatility of interlocks is with the transfer by a road tanker of caustic and alkaline compounds to water treatment plants. Tanker unloading bays, or bunds, normally have a drainage system and when a tanker is unloading caustic and alkaline, the drain has to be diverted so any spillage doesn’t pass into the water supply. This diversion is normally carried out by a two- or three-way interlocked valve. The procedure is simple: Before unloading the tanker, the valve has to be turned to its “divert” position; this frees a key that the tanker driver then uses to activate the unloading mechanism. Once the procedure is completed, the driver removes the key and returns it to the valve, which can then be turned back to its “normal” position. This simple procedure ensures there’s no possibility of accidentally releasing harmful chemicals into the clean water drain.

Pressure relief valves
Another example of interlocking is with pressure relief valves, which are often installed on closed water loops to protect systems from damage caused by excessive pressure build-up. When maintenance needs to be carried out on these valves, it’s important to ensure an open-pressure relief path is maintained at all times. For this reason, most modern piping arrangements usually include a standby relief valve, allowing continuous operation of the plant while maintenance procedures are carried out. It’s essential, however, to ensure the standby relief valve is opened before the workpiece relief valve is closed; fitting a two-key interlocking system to the valves is an effective way of ensuring the procedure is carried out correctly.

A number of new time- and labor-saving devices also have many uses in the water and wastewater industries. One of these is a portable valve actuator suitable for use with manual valves in situations where valve size, pressure rating or work environment would otherwise require a dedicated actuator or work crew. Ideal for isolated or minimum-facility installations, it’s particularly useful for moving tight or partially-seized valves. An example where the portable actuator can be used in the water industry is with pumping stations, which often use large gear-operated valves. It makes operating these valves a simple one-man operation.

Remote operation
Another useful device allows the remote operation of valves in hard-to-reach or hazardous locations. It’s made up of three elements—an operator station (comprising a geared handwheel and mounting facility), a valve station, and a patented cable-linkage system joining the two stations together. Due to the unique nature of the helically-wound steel linkage cable, turning the handwheel of the operator station automatically operates the valve station. It can transmit drive to a valve up to 200 feet (60 meters) away and can accommodate up to 540 degrees of bends between the two stations. This allows it to be passed through walls, floors, tunnels and any other obstacles that may reach the valve.

Two of these units were recently supplied to a leading private water utility provider in the United Kingdom for remote operation of gate valves located in underground sewage shafts. The valves are located between 26 and 33 feet (eight and 10 meters) below ground, one being used regularly to control sewage flow and the other used only in emergencies to prevent sludge overflows. For safety reasons, manual operation of the valves wasn’t practical, as it would require a confined space underground work crew every time one of the valves needed to be operated. By installing the units, the whole procedure has been greatly simplified and an individual can do it by simply turning a handwheel on the surface.

In the wake of the 9/11 terrorist attacks, fears have grown about terrorists possibly gaining access to water treatment and distribution facilities and contaminating water supplies. Water companies have responded by various means including installing surveillance cameras, hiring security guards, and fitting more secure locks on plants and equipment. In the latter case, several options exist for locking off valves, switches and access covers. The simplest of these is a padlock and chain; more secure systems are available, however, that allow a greater level of security while ensuring quick and easy access remains for authorized personnel. These include devices such as multi-clasp locks, held in place by up to six padlocks, and anti-tamper locks which, once fitted, are accessible only by authorized individuals. Both systems lock the valve, switch or access cover in place (much like an interlock) and prevent it from being operated until the lock or cover is removed. Unlike interlocks, however, they don’t require any modification to the valve or access cover, and can be fitted or removed as often as required.

Conclusion
While the need for valve interlocking may not be as crucial in the water and wastewater industries as it is in hydrocarbon processing, it’s nevertheless important. In this brief article, situations have been described—such as tanker unloading or the maintenance of pressure relief valves—where interlocking is desirable. In addition to potentially dangerous valve operating procedures, there are also instances where interlocking can provide operators with a greater degree of control over their plants and equipment. An example is when interlocks are fitted to actuated valves, allowing complete manual control of the actuators. There are also cases where portable valve operating devices can make it easier to operate valves in isolated, hard-to-reach or hazardous locations. Finally, simple “lock off” systems are useful as security devices in drinking water installations.