Cruisin’ Along the Caribbean, ‘Mon—Cayman Air Conditioning and Supply of the Cayman Islands

About three years ago, Gerry Tyler received an email inviting him to the Cayman Islands on someone else’s tab. He—as most of us would—viewed this offer with suspicion, and may have dismissed it as spam except for one thing: The sender was dangling a job opportunity as an additional enticement.

Sounds good, right? There was one problem. The 51-year-old Tyler was set to start his “new” job in radiant heating systems for a company in Boulder, Colo. In fact, he had sold all his worldly effects in Santa Fe, N.M., and was staying with friends in Denver when he decided to check his emails. There, he came across the intriguing proposition.

The guy “had gotten my résumé somehow and offered to fly me down for an interview,” Tyler says. “I had put my résumé out on one of the air conditioning websites, and he picked it up. He had it in his possession for a year before he contacted me.”

Timing is everything
If nothing else, the Cayman Island emailer—who owns Cayman Air Conditioning & Supply in Grand Cayman, a business with a rapidly growing interest in residential water treatment—had impeccable timing. After all, it was January. Tyler was sitting in typical 15-degrees-below-zero weather in Boulder, and the allure of pristine blue water and near-perfect temperatures was enough for him to say, “Sure, get me the ticket.”

Three days later, Tyler was sitting at a restaurant on a pier overlooking the ocean. It was 75 degrees and he found himself drinking a rum concoction. He was sold… hook, line and sinker. The only formality left to be said was “I’ll take it,” which he did on the spot. “If you could see (the view), you would have done the same thing,” he concedes. “It was absolutely breathtaking.”

In a foreign land
Afterwards, Tyler returned to Boulder and declined the job offer there. Meanwhile, it took three months for him to get his work permit for the Cayman Islands. Once the permit was cleared (see EXTRA), he arrived with nothing but a suitcase full of clothes and 25 years experience in air conditioning and heating/refrigeration.

Because the island is sparsely populated—much of Grand Cayman is uninhabited—with a mere 40,000 people on an area seven miles by 20 miles wide, the concept of product/service diversity for any business is simply a matter of survival. Cayman Air is no different. Bear in mind, 94 percent of all consumable products arrive by boat, according to Tyler.

This is his first foray into the water treatment industry. He quickly discovered the ways of doing business on Grand Cayman. “I started learning the customer base and how incredibly flexible and diversified you have to be here,” he says. “Water has become a huge part of the business now. I also started doing reverse osmosis (RO), which has been excellent. It has taken off like wild fire.”

Tyler’s official title is sales manager and he confesses to doing design engineering, counter work, sweeping the floor, and much more—”but I don’t make coffee.” The business has two full-time employees and a part-time employee. 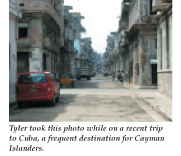 Water on display
To prove its seriousness in the water sector, Cayman Air built an active water treatment display at its facility where different types of filters run into various faucets. It was built by Tyler and the types involved include carbon block, granular activated carbon, depth, melt-blown and a countertop RO model. “People can actually come in and taste the different grades of water,” he says.

Tyler has become more familiar with water conditioning through his involvement with boilers, ice machines and state water utilities—as well as reading trade magazines: “My brother sent me a copy of WC&P (about a year-and-half ago), and I had no idea how sophisticated water conditioning had become.”

On Grand Cayman, water is fairly inexpensive, going for about 2-½ cents a gallon. The business’ products take into account the island’s transient middle class. For this reason, the business hasn’t explored the idea of rentals. People want portable purification, and bottled water is also a big thing while not always affordable to all. RO, on the other hand, is inexpensive and—with Cayman Air—customers have a one-stop shop for filters, wrenches, O-rings, etc.

Money in the form of ice
Cayman Air buys most of its equipment through Flowmatic, John Guest (fittings), USFilter, CUNO (ice machines), Everpure and Tridim. Tyler has thrown himself into the ice machines part of the business as well since “there really was no one who replaced water filters for the 10-inch, 20-inch and 20-inch by 4-½ inch cartridges.” The business is heavily into sediment and carbon filters and builds its own ice machine water filters (single and dual casing).
In general, the island’s water is naturally soft, fairly clean and lacking in minerals albeit highly chlorinated.

Actually, the water is so soft it can be detrimental to equipment such as water heaters. As such, Cayman Air doesn’t need to stock softeners. RO and carbon are the most visible pieces of water treatment at its two buildings with a total area of 6,000 square feet. Tyler says the business is beginning to institute filter replacement contracts for restaurants and their ice machines, a niche that has become “very lucrative for us.” It’s tackling the restaurant market aggressively since the whole island is nothing but a “big restaurant,” he says. 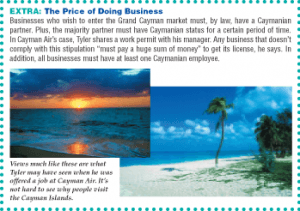 At least two-thirds of Cayman Air’s customers are on municipal water. Private water consists of groundwater and a wide use of cisterns, which translates into more involvement with disinfection, i.e., chlorination, ozonation, different related equipment and ultraviolet light, Tyler says. Primarily a wholesaler with some retail business, the company is 85 percent residential with the remainder in commercial work. Point-of-entry is another untapped market, he adds. Advertising is limited to the local newspaper and Buy & Sell (a weekly classified sales newspaper).

All bottled up
RO units take the total dissolved solids (TDS) down to 40 or lower parts per million. Problems with RO occur when space becomes an issue, Tyler says, “unless I can put it in the garage or under the sink. Customers will say that ROs waste water but they’re still more cost effective than bottled water.” Flowers is “the biggest and baddest” of the bottled water companies on the Cayman Islands, and has cornered the market, Tyler says.

Education is also part of the program at Cayman Air. “We try to educate people,” Tyler asserts. “We have fliers and pamphlets about water, water and its benefits to the body, and fatigue and water. In this kind of climate, it doesn’t take much for one person to sweat out a couple of quarts of water (in a day).”

Being in a hurricane/tropical storm zone, the business also recommends citizens store water for emergencies. Cayman Air uses the local authority’s facility for water testing purposes. “The water authority is a very sophisticated organization and exceptionally professional,” Tyler says. “Polish their water is all that we do. We don’t need a license because licensed plumbers do our installations.” He cites only growth on the island and resulting demand as a potential drawback inasmuch as there’s too much work, but says it’s a “good problem to have.”

A competitor of Cayman Air is Le Beau, which only recently entered the market. Le Beau takes city water and runs it through carbon, steam distillation, and then UV and ozonation. Tyler seems unfazed: “That’s all they do and we do 50 other things.” His company builds its own repeat business by implementing a quarterly filter replacement program. As for big-box retailers, “you couldn’t have one here; they wouldn’t want one,” Tyler says. Furthermore, “a (water treatment) franchise would die on the vine,” he claims. “It’s all about relationships here. It’s all about family here.”

Conclusion
Tyler has taken to the local culture as well as he has taken to the water treatment industry—that is, with flying colors. “There’s not a lot of traffic, and you can’t go fast here. It’s the Caribbean, ‘mon,” he says in his best native imitation. And he admits to wearing shorts to work every day. Something he could have never done in the winter if he had stayed in Boulder.