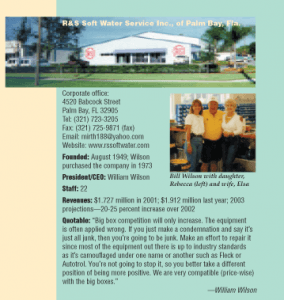 William “Bill” Wilson wears many hats. In fact, his résumé reads like a Who’s Who in community service. He has been a Shriner since 1973, serves on the board at the Florida Institute of Technology, was a former president of the Palm Bay (Fla.) Breakfast Club for the Rotary Club, helped found the Kiwanis Club in Palm Bay, sponsored a bowling league—not a team—for 15 years, was a past chairman of the Palm Bay Chamber of Commerce, and served as a board member with the Malvern (Fla.) Chamber of Commerce. And, oh by the way, he runs a water treatment business that will gross over $2 million this year.

“I encourage all of our personnel here, including myself, to be active in the community from Little League coaches and sponsoring (different charities) to joining community clubs,” Wilson, 61, says. Asked how he has time to do all of this and keep tabs on R&S Soft Water Service Inc., of Palm Bay, he quickly answers, “I make time.” He also says that when any of his 21 employees volunteer his/her time to local groups, it serves as a good cross-reference for the business. Plus, if an employee wants to volunteer, Wilson makes certain the time off is approved with pay.

From air to water
To many, this may sound like a story best filed under “too good to be true.” But fairy tales like this don’t happen overnight. How a local boy from Homestead, Fla., grew up with a love and curiosity for how things work, went to Germany as part of the U.S. military, married his sweetheart there, returned home, worked on the Apollo space program for NASA, and received a knock on the door that paved the way to a whole new career.

The best place to start with a success story as convoluted as Wilson’s is the beginning. During the height of the Vietnam War, Wilson was sent to Germany to serve with the U.S. military. Upon his return to Florida in 1967, he came back with his wife, Elsa, whom he had met abroad.

“My wife’s dream was to have a home, and I decided I could afford a home…barely,” Wilson says. At the time, he was working with NASA via Boeing at Kennedy Space Center as an industrial engineer on the Apollo program. As soon as they moved into their new home, Wilson forewarned his wife: “‘We’re going to have a lot of people trying to sell you a lot of stuff. You just tell them you don’t speak English.’ So this guy from Lindsay, who kind of misrepresented himself, knocked on the door and started talking about our water.” Playing it wise, Elsa said she only spoke German. The salesperson from Lindsay—an Ecowater predecessor—smiled, and started rattling off in German.

Investment for the future
After explaining the water was bad, the salesperson made an appointment to meet with the Wilsons after Bill got home after work. After listening to his spiel, the Wilsons finally heard the bottom line. Wilson recalls, “He said we can crack this for about $1,800, and I about gagged.” With an engineering background, Wilson went to the local library and researched water softeners, ion exchange, salt and hard water. Then he came across R&S Soft Water. Soon after, he paid $429 for the company’s water treatment system. Wilson believed so much in his new system that he started working part time for R&S.

In 1969, Wilson got so caught up in the nationwide fervor of Neil Arm-strong landing on the moon he didn’t realize that tens of thousands of layoff notices were on their way to NASA from Washington. Because he was still young, Wilson wasn’t considered layoff material. But then it all hit home for him: “After seeing a guy twice as smart as I was who sat next to me get laid off, I went home to my wife and said, ‘I’m going to work tomorrow and quitting.’ She said, ‘Don’t do that!’ She was pregnant with our boy so I decided to quit as soon as he turned 14 days old so I could get insurance on him.”

Wilson went to work for Boeing, but, after seven years, up and left it as well. As a fallback, he had his part-time status with R&S, which became permanent. Then one day, he says in his best impersonation of Victor Kiam (from the old Remington shaver commercials): “I liked the company so much that I bought it.”

Things weren’t rosy at the outset, though. R&S Home Improvement was originally founded by two men—Rickert and Seymour—in August 1949. When Wilson took over Jan. 1, 1973, it was located in Cocoa Beach, a city that had just put in a hardness reduction plant. As a result, R&S had only one part-time installer. Wilson inherited 25 equipment rentals and the company’s suppliers.

Clueless, but…
“It was tough,” he underscores. “This company only did $32,000 (in sales) in 1972. In my first year, I made $108,000 and I didn’t have a clue.” He admits now that he was an effective salesperson but lacked business savvy: “I thought the solution was to sell another unit. I got a lot smarter real quick.” In 1977-78, during near-recession times, R&S battled through it all. Initially, however, R&S was Wilson and vice versa as he did all the selling, installing, delivering, and every other “ing” verb. He says, “I made just enough to be dangerous.” Finally, he had to hire someone and did so on July 4, 1973. “We didn’t think about holidays back then,” he jokes. That same employee has left R&S twice and come back both times, and is employed with the company today. He is also the vice president/general manager.

R&S is an independent dealer  with a residential customer base that accounts for 80 percent of its business while 10 percent is commercial and 10 percent is institutional/commercial. With two locations (corporate headquarters and a satellite office both in Palm Bay), the company dabbles in water vending, lawn irrigation systems as well as pump pressure tanks on private wells. In addition, a diversified rental division currently contains about 450-500 accounts. Wilson recalls what the former owner of R&S once told him: “If someone asks you how many rentals you have, and you can tell them, you don’t have enough.” He adds that one rental per 10 sales is a good gauge.

About half of Wilson’s customers are on municipal water and, as such, carbon filters with an emphasis on closed-end chlorination are a big deal. That’s because Palm Bay’s water is high in sulfur and colloidal iron, and chlorination is “a super fix for it.” Wilson says. He professes to buy a lot of equipment direct, and water conditioners and carbon filters top his list. “Until Autotrol came out with this new valve, our industry really didn’t have a good backwashed carbon filter,” he says.

RO turnaround
Reverse osmosis (RO) is the fastest growing segment of R&S’s business, which wasn’t always the case. “When I got into the business, I was scared to death of them,” Wilson says. “When I started putting them out, they were not that good.” Advances in technology, though, make residential RO systems a must, he says. R&S used to sell one RO for every 10 water softeners. Today, it sells eight ROs for every 10 water softeners. Other common equipment includes carbon adsorption filters (countertop and undercounter), pre-filtration (sediment, sand, etc.), and replacement cartridge filters.

R&S goes to the following manufacturers for its equipment–GE Osmon-ics, Alamo (one of its biggest vendors), Structural, Fleck/Pentair, Mattson (now owned by Alamo), Cargill, and International Salt Co. It utilizes all water technologies save for deionization and just a small amount of ultraviolet for its water vending machines. In 1982-83, the company had a wholly owned subsidiary called Water Clean of Florida that sold wholesale to about 85 to 100 dealers in Florida and the Southeast. Though Water Clean no longer exists, the company still does some wholesale with a few dealers.

As Palm Bay—like most of Florida—sits on flatlands, typical water problems include chlorine (and hardness associated with chlorine) to hydrogen sulfide, colloidal iron, hardness, some pH problems (acidity and alkalinity), and a lot of tannins (private water, i.e., wells). The nearby city of Malvern recently put in an RO plant, but the water is still hard, Wilson says. Also, customers with homes near the beach have salinity issues that generally call for whole house RO units.

Moving up… the block
In 1998, a blessing in disguise appeared out of nowhere. Eckerd Drug wanted the business space where R&S sat for 25 years. And why not? It was on the busiest intersection in the county so the visibility factor rated high. But Wilson found some faults in the location, which made the Eckerd offer tempting. For one, R&S almost got flooded out one year and there was no room for vegetation on the grounds. After continual negotiations, he sold the space to Eckerd. R&S went from a 6,200-square-foot facility to 5,000 square feet. It also rented a storage space for “a lot of the junk that most dealers have,” he says. The actual transaction meant the company moved only 1,580 feet north from its original location. On Jan. 1, 2001, R&S opened up its new digs (see photos above left). A revamped showroom has four sinks that can test water for everything except bacteriological contaminants. A lot of walk-in traffic occurs at the corporate location and a truckload of salt is used per day, claims Wilson.

Though Palm Bay’s population of 86,500 isn’t overwhelming, it offers a good cross section of young recent college graduates–the city is home to Harris Corp., a defense contractor and Fortune 500 company that employs 16,000–and retired senior citizens who anchor the economy. R&S also prides itself on competitive pricing. “You look at these blue suede shoe boys selling $1,800-to-$3,000 units, and then look at our average price of $600 to $850 and it goes a long way,” Wilson says. He counts 14 water treatment dealers in the phone book including one from each major franchise, “trunk slammers” (those who work out of their homes), independent dealers and well drillers.

For Wilson, though, it all starts and ends with his employees. “Our human resources do it. Our salespeople are not order takers, but they’re not blue suede shoe-driven either.” Since the salespeople aren’t paid on commission, “they are not under the gun to sell,” he says. “I have people who have been with me 20, 25, almost 30 years. They want to grow with the company.”

Conclusion
Wilson sees the move to the new location as a measure of R&S’s commitment to the community and its customers. “I think our business is going to do nothing but continue to grow,” Wilson contends. “If I didn’t think so, I would not have put up the kind of facility we have today. After 30 years in the business and substantial gain in the selling of the old property, I could have said, ‘I quit, I retire, and I’m out of here.’ But based on our human resources, and with staff that has families, mortgage payments and car payments, I think [we’ve operated] in their best interest.” As such, Palm Bay is home to a company that represents its people well under the sink as well as in the community.