If asked to list the symptoms of water-borne disease, one would probably say diarrhea, vomiting or other flu-like symptoms. While diarrhea and gastroenteritis are the most commonly identified symptoms associated with drinking water pathogens, these acute ailments are merely the tip of the iceberg regarding the spectrum of waterborne disease. Many other chronic diseases are being linked to microbial pathogens potentially transmitted by the water route. Long-term health problems are now being recognized as sequelae—an aftereffect or secondary result–to earlier microbial infections. In short, a safer drinking water supply can protect us from much more than diarrhea. 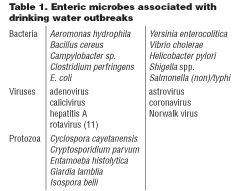 Human enteric pathogens are microorganisms that infect man via the fecal oral route, surviving and invading the gastrointestinal system. They include bacteria, viruses and protozoa, and can be transmitted by contaminated drinking water (see Table 1). The Centers for Disease Control and Prevention (CDC) estimates that 900,000 cases of waterborne disease occur each year in the United States, resulting in 900 deaths. The number of undocumented cases is known to be much higher.

Enteric pathogens generally produce an acute, short-term illness that’s usually self-limiting in days to weeks. In contrast, chronic sequelae are long-lasting and often incurable. Much is known regarding acute diseases attributable to enteric pathogens; however, the risks of acquiring a chronic infection and experiencing long-term health effects, while recognized, are poorly quantified.

Chronic sequelae are defined as the secondary adverse health effects that occur as a result of a microbial infection with different symptoms than the initial acute reaction, typically lasting three or more months. Most experts estimate that less than 5 percent of waterborne disease results in chronic sequelae; however, tracking of a foodborne Salmonella outbreak showed that 15-16 percent of cases suffered chronic arthritis in the months following their initial illness.[1]

Linking waterborne microbial infections with secondary complications is difficult due to the fact associative illnesses aren’t likely to be identified. Furthermore, chronic effects may occur at a much later date. Patients with acute illnesses aren’t typically followed over time to observe secondary effects. In fact, even the initial acute infection is rarely documented.

Chronic infectious diseases
Symptoms of enteric microbial infections range from mild to severe with a number of those infected being asymptomatic and completely unaware of the infection’s presence. Any of these infections, however, can result in a chronic predisposition to potentially more serious health consequences. Chronic infections may manifest as a prolonged condition of the initial disease, a recurrent episode, a secondary condition directly, or indirectly caused by the pathogen. For some, the chronic sequelae may be an indirect result of the acute illness overtaxing the immune system and causing problems due to an impairment of the immune system, thus initiating a secondary health effect.

Gray areas
In some cases, specific microbes have been clearly linked to chronic illnesses while, in others, the association is less definitive. Helicobacter pylori is the known cause of chronic gastritis where inflammation may persist for up to a year after elimination of the infection. Chronic gastritis is a clear precursor to more serious secondary complications such as ulcers or gastric cancer.

Several bacteria can induce rheumatoid disease or arthritis. Salmonella, for example, can spread through the body to the synovial space, causing inflammation and septic arthritis in the spine. The condition is treated with antibiotics and a full recovery is possible but, for some, permanent joint damage will occur. The severity of the outcome is largely dependent on host factors and the virulence of the microbe.

Shigella spp., Yersinia spp., Campylo-bacter jejuni, and Klebsiella pneumoniae have also been connected to rheumatoid disease. A subset of those infected will develop Reiter syndrome.2 Microbial infections occurring elsewhere in the body can lead to arthritis. For example, E. coli infection occurring in the bowel can bring about joint inflammation in various sites.

Awareness has increased in recent decades regarding the chronic syndromes of E. coli O157:H7. Following infection with this and other strains of E. coli, acute renal failure and abnormal bleeding can occur and lead to death in both adults and children. Unborn children are at increased risk of microbial infection where exposure to microbes can lead to malformations and miscarriages. Pregnant women are warned of the routes of infection from Listeria due to its ability to cause spontaneous abortion even in the late stages of pregnancy.

C. jejuni and other enteric pathogens are suspected causes of Guillian-Barré syndrome, a neuromuscular disorder where the myelin sheath around peripheral nerve cells is lost, resulting in paralysis. Even with adequate treatment of this disease, up to 20 percent of patients require mechanical ventilation and a very small percentage result in death.

Compared to bacteria and protozoa, fewer viruses have been identified as producing chronic sequelae. Perhaps this is because viral infections aren’t as readily identifiable due to difficulties in their detection and diagnosis. In the last year, scientists have made great progress in establishing a link to infectious viruses and diabetes. Although suspected for decades, direct evidence was lacking. Today, microbial research has directly targeted coxsackievirus B4 (CVB4), a common cause of viral infections in children. Coxsackieviruses, along with polio, are a member of the enterovirus group. The many strains of coxsackie-virus produce a variety of symptoms ranging from rashes to flu-like illness to eye infections. Although hepatitis A virus is suspected of causing chronic infections, the proof is lacking. Concern is that the virus can trigger the onset of autoimmune chronic active hepatitis in a genetically predisposed group.

In some instances, the microbes themselves don’t cause a problem but their toxic metabolites do. Mycotoxins, chemicals produced by molds (i.e., Fusarium, Aspergillus, and Penicillium) during and after their growth, are known to be carcinogenic, mutagenic and teratogenic.

Host stability appears to be an important precursor to chronic sequelae. Conditions of poor health, immunocompetence, and genetic predisposition are all important factors. Persons with challenged immunity, i.e., AIDS patients, are frequently infected with enteric bacteria, protozoa or viruses. Chronic sequelae of nutritional and gastrointestinal illness may further develop. The death rate due to diarrhea, which may last from months to years in sensitive populations, is nearly 80 percent.

Determining the true impact of waterborne organisms today and their potential health impact in the future is difficult. To complicate matters further, microbes are transmitted by other routes including food and person-to-person contact. Participants from the Institute of Medicine Forum on Emerging Infections workshop (Oct. 21-22, 2002) discussed the need for long-term surveillance systems to establish a temporal relationship between infection and chronic disease and develop prevention strategies to eliminate or minimize chronic effects.[2]

While the majority of sequelae from chronic infections aren’t immediately life threatening, one’s quality of life can be greatly affected. Likewise, the cost burden to society is immense. Another factor to consider is the growing population of immunocompromised individuals. These sensitive populations are more susceptible to waterborne infections and tend to experience a more severe outcome (i.e., serious illness, death) following infection. Adverse health conditions continue even with the use of state-of-the-art treatment plants and many regulatory efforts that improve water quality. This is where point-of-use (POU) treatment options can have a dramatic impact. Studies show that people with POU systems in their home experience 35 percent fewer incidences of acute gastroenteritis.[3] No estimates are available to determine what percentage of long-term, chronic conditions might be avoided.

Conclusion
Given the appropriate level of treatment, waterborne disease is largely preventable. Treated water supplies combined with adequate food safety and sanitation practices have a dramatic impact on microbial disease incidence. Therefore, avoidance of microbial infection will not only save people from using up a few sick days at work, but may also contribute to a better quality of life in the long term.