Summary: Perchlorate contamination of potable and groundwater is a national issue. Perchlorate removal from potable water utilizing ion exchange resins is a viable option, but choosing the right resin depends on a number of complex factors. Options for point-of-use/point-of-entry designs are discussed.

Perchlorate now threatens groundwater supplies in at least 22 states. Contaminant levels range from 1 part per billion (ppb) in Massachusetts and Maryland to thousands of parts per million (ppm) in California and Nevada.1 Although perchlorate occurs naturally, by far the largest source is from the manufacture of ammonium perchlorate for use by the military as solid rocket fuel. The high solubility and extreme stability of the chemical at low concentration assures that it will be around for many years to come. The impact on human health is still being studied, but recent research shows that perchlorate blocks the uptake of iodide by the thyroid gland and disrupts the production of thyroid hormone. Lack of thyroid hormones negatively impacts the metabolism of fetuses and newborn children. Perchlorate has also been implicated in the formation of tumors of the thyroid gland.2

Even though the U.S. Environmental Protection Agency (USEPA) hasn’t issued a maximum contaminant level (MCL), municipalities in states hardest hit, such as California and Nevada, are increasingly turning to ion exchange resin technology to clean up their water supplies.

Contamination has now spread to at least 400 private wells located in Morgan Hill, Calif. Point-of-use/point-of-entry (POU/POE) ion exchange treatment devices are logical choices for such individual wells. Original equipment manufacturers (OEMs) thinking of designing such devices will need to focus on some key factors such as:

In addition, designing to produce treated water with 1 ppb perchlorate or lower would seem prudent. It’s hoped that the preliminary design and cost data presented below will be useful to OEMs interested in developing such POU/POE treatment systems.

Relative affinities for perchlorate range from 4 to 5 for gel acrylic SBA Type I resin to greater than 1,000 for a highly selective bifunctional resin developed and patented by Oak Ridge National Laboratories (ORNL) for perchlorate removal. The high selectivity of the latter resin, nicknamed “BiQuat” by ORNL, stems from the use of two different quaternary groups in its structure as opposed to a single group in other resins. The lower affinity of gel acrylic SBA Type I resins allows regeneration of the perchlorate loaded resin using elevated levels of brine. In contrast, the much higher affinities of the other resins make them extremely difficult to regenerate efficiently with brine. ORNL has recently developed a special tetrachlor-oferrate-based regeneration procedure for the bifunctional resin.

The capacity of a specific resin depends on its affinity for perchlorate relative to competing anions such as sulfate, nitrate and chloride. Table 1 shows that SBA Type I acrylic resins have a higher affinity for sulfate than perchlorate, but a lower affinity for nitrate than perchlorate. As a result, during service, perchlorate will breakthrough ahead of sulfate but after nitrate (see Figure 1). Early breakthrough of nitrate with this resin can potentially lead to the unintentional problem of nitrate peaking above the current MCL of 45 ppm as NO3 during part of the service.

Figures 1 and 2 show typical breakthrough capacities for acrylic SBA Type I and styrenic SBA Type I or II of about 500 and 5,000 bed volumes (BVs), respectively. Capacities are based on typical Redlands, Calif. water quality as shown in Table 2. (Note: One bed volume is approximately equal to 7.5 gallons per cubic foot of resin).

Although breakthrough for styrenic resin occurs at approximately 5,000 BVs, it takes about 15,000 BVs to saturate the resin completely with perchlorate. In practice, a pair of ion exchange resin vessels operating in lead-lag mode can capture most of this “extra capacity.”

The affinity of the bifunctional resin for perchlorate is so much higher than any of the other resin that as much as 110,000 bed-volumes capacity has been obtained in field tests by ORNL using a lead-lag pair of resin vessels. Again, the lead-lag vessel arrangement is used to completely saturate the resin in the lead vessel to an equivalent capacity of approximately 75,000 bed volumes.

POU/POE options
Resin performance in a POU/POE environment will depend on a number of critical factors including the ability of the resin to reliably operate at relatively high specific flow rates typical of these devices. While industrial systems are designed for flow rates of 1 to 5 gallons per minute per cubic feet (gpm/ft3), POU/POE devices are typically operated at flow rates ranging up to 15 and even 30 gpm/ft3. Higher specific flow rate results in higher ionic leakage and consequently reduced resin capacity. Therefore, resins with relatively low affinities for perchlorate will be most affected. 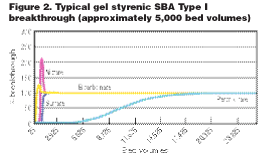 The capacity of each resin depends largely on the chemistry of the specific water supply to be treated and the relative affinities of perchlorate and other competing anions. Acrylic and styrenic capacities are particularly impacted by water with high sulfate content while BiQuat and nitrate selective resins are negatively impacted by high nitrate waters. BiQuat will be least impacted by high total dissolved solids (TDS) waters.

A comparison of the relative performance of the resins discussed above is given in Tables 3 and 4 for POU/POE service, respectively. In both cases, the same water shown in Table 2 is used. The estimated capacity of activated carbon is also shown for reference.

The assumed water usage for POU service is 1,000 gallons per year per device. Only the replacement cost of the media is shown with the costs of equipment, installation, testing and maintenance being additional. Capacity estimates have been downgraded significantly to allow for inherent inefficiencies typical of such high-flow, small devices.

A disadvantage of the data in Table 3 is that they are relevant only for the specific water used and the capacity data cannot be extrapolated for waters with significantly different quality. The preliminary capacity estimates shown are therefore to be used only for overall planning purposes.

For better design
Since all media can potentially foster the growth of biological matter, especially when operated for such a relatively long period, it would be prudent to incorporate appropriate biological control measures before and after the resin component device (i.e., silver-impregnated carbon, if acceptable). Since seasonal changes in influent water quality can impact the capacity of the resin, this must be allowed for in design. Summarizing, for POU devices, it’s best to:

In addition, incorporating a water meter would be helpful to end-users in determining the replacement frequency for the device. All media should meet prevailing Food and Drug Administration and ANSI/NSF criteria as may be applicable such as ANSI/NSF Standard 44 test protocol for the media and ANSI/NSF Standard 53 for the complete system.

When the cost of a POU device is considered, the media cost is likely to be only a small fraction of the overall cost since the cost of hardware, labor for installation, etc., can be much higher. Therefore, choosing the best performing media (and not necessarily the lowest cost media) will likely give the greatest assurance of reliability to both the system designer and the consumer.

Table 4 shows preliminary economics for POE devices.8 Water consumption is estimated at 350 gallons per day per household. The assumed design is for operation of two ion exchange resin vessels in lead-lag mode with the lag vessel used for polishing of the effluent from the lead. When the lead is exhausted, the lag is moved into the lead position and a fresh charge of resin is installed in the lag position. The lag vessel serves as a valuable guard against unexpected changes in operating conditions and allows for the time lag between sampling and obtaining test results. Again, the values shown in Table 4 are valid only for the water quality shown in Table 2.

Perchlorate is exchanged preferably at the top of the resin bed due to the higher selectivity of the perchlorate ion vs. others usually present (i.e., sulfate and nitrate). Any attempts to backwash resins during the service cycle will likely result in mixing of the perchlorate-contaminated resin at the top of the bed with the “cleaner” resin at the bottom, resulting in premature leakage of perchlorate. Pre-filtering of the water is recommended as a precaution. The system should be designed to backwash with non-contaminated water and the resin should be classified by backwashing prior to commissioning the system. By classifying the bed, there’s less of a chance the resins will mix on subsequent backwash cycles. It also reduces risk of biological growth within the bed.

Due to potential biological growth within the resin bed, it may be prudent to install disinfection technology possibly before and after the perchlorate media or incorporate it with the media. The cost of ongoing service to monitor and replace exhausted resins is likely to be a significant part of the overall cost. Therefore, choosing a resin with a longer useful life is likely to provide the best economics.

About the author
Francis Boodoo has over 25 years of experience in industrial, commercial and potable water treatment. As technical sales manager for The Purolite Company, of Bala Cynwyd, Pa., he provides support to customers and sales personnel with emphasis on specialized ion exchange technologies. He holds a bachelor’s degree in chemical engineering from the University of the West Indies and a master’s degree in business administration from Colorado State University. He can be reached at (800) 343-1500 or email: fboodoo@puroliteUSA.com