In the United States, microbiological organisms are common to tap water meeting the highest treatment and regulatory standards. While some of these organisms may be harmful to healthy individuals, others are considered acceptable “normal flora” of general water supplies but may cause serious disease in severely immunocompromised persons. Hospitals serve food and water to some of the most susceptible populations to chronic and deadly infections. Conservatively, it’s estimated one in 10 hospitalized patients will contract an infection from the hospital environment itself. These acquired infections are termed “nosocomial” and are a great concern to health care providers.

Microbes of concern
A wide variety of viral, protozoan and bacterial organisms are “frank” waterborne pathogens—found in fecally contaminated water—and capable of causing waterborne disease in the general population (i.e, hepatitis A, Cryptosporidium or Salmonella). The goal of municipal water treatment, in part, is to minimize the presence of these microbial organisms via filtration and disinfection methodologies. Several bacteria, however, are naturally present in the aquatic environment and soil and are commonly present in drinking water supplies (i.e., Legionella species, Aeromonas species, Pseudomonas aeruginosa, and Mycobacterium avium complex—see Table 1). 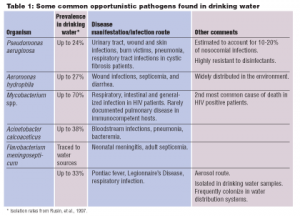 These organisms are typically opportunistic pathogens and may be present in low numbers in drinking water but survive and grow within the distribution system, biofilms and storage tanks. Opportunistic pathogens aren’t considered harmful to most individuals, only causing disease in immunocompromised hosts (i.e., the very young, elderly and those with chronic infections or prior illnesses) and often only in severely ill hosts. Opportunistic pathogens responsible for the majority of nosocomial infections are primarily transmitted via contaminated medical devices, aerosolization or contaminated hands and surfaces. Rarely are these organisms transmitted via the gastrointestinal tract from actually drinking the water.

Who’s at risk?
Scanning literature from January 1966 to December 2001, researchers found >2 million nosocomial infections occur in up to 10 percent of patients each year in the United States. Many infections lead to a substantial level of illness, death and financial burden, and are known to occur via the waterborne route. In fact, an estimated 1,400 U.S. deaths each year are the result of waterborne hospital-acquired pneumonia caused by Pseudomonas aeruginosa alone.1 Numerous studies have documented hospital water supplies as the source of nosocomial infections in patients. What’s most disturbing is the fact these infections are largely preventable.

Assessing individual risk is important in determining the best preventative approach to minimizing waterborne nosocomial disease. Two presenters2 at the NSF International/World Health Organization symposium on HPC Bacteria in Drinking Water in Geneva in April 2002 provided a description of various levels of immunosuppression and respective protection measures related to drinking water quality. A summary of the results of their working group, “Hygienic measures in immunocompro-mised patients,” is listed below:

While the preceding descriptions offer a starting point for control of nosocomial disease transmission via a waterborne route, specific categories preclude many susceptible individuals. For example, the general population is relatively resistant to Legionella infection; however, in addition to hospital patients, people with chronic health conditions (i.e., chronic obstructive pulmonary disease, diabetes, heavy smokers and drinkers) may also be affected by exposure to Legionella. Therefore, an individual assessment of risk is critical to determine feasible and necessary protective limits.

Patients may be exposed to harmful waterborne organisms via bathing, showering and drinking water. In addition, hands and medical equipment washed or rinsed in tap water are known to be a source of transmission. For some organisms, i.e., Cryptosporidium, even small concentrations can have a significant impact on the exposed population. Consider that a level of one Cryptosporidium oocyst per 1,000 liters (L) of drinking water is enough to cause 6,000 infections per year in a city the size of New York.1 For most opportunistic pathogens, large numbers of bacteria are required to become problematic.

An ounce of prevention
Most parents can probably recall being advised to carefully sterilize all formula, bottles and other oral-contact items of newborn babies. While these efforts require a certain level of commitment and diligence, they were achievable and provided an added level of safety and confidence. A similar effort, however, isn’t necessarily available or recognized for members of the population that may be at equal or even greater risk of waterborne disease than infants, the medically compromised.

Although standards and regulations exist for control and prevention of water contamination in community water supplies, no specific regulations exist for protection of special populations from waterborne nosocomial infections. A major concern in the drinking water industry is the ability of opportunistic pathogens to proliferate in the distribution system, biofilms and some point-of-use water treatment devices. A four-step approach to prevention of nosocomial waterborne infections is recommended:1

Public health agencies have issued several advisories to immunocompromised populations. For example, following a large outbreak of Cryptosporidium, the U.S. Environmental Protection Agency and the Centers for Disease Control and Prevention (CDC) issued guidelines for prevention of waterborne protozoan infections in the immuno-compromised. The recommendations stated the immunocompromised should only consume water that’s bottled sterile, submicron filtered or boiled.

Conclusion
The production of sterile drinking water for the majority of the population isn’t only unfeasible but also unnecessary. Most individuals are capable of resisting infection from ubiquitous, opportunistic organisms found throughout the environment and known to regrow in distribution systems or certain water treatment devices. For those with severely compromised immune systems, however, current water quality guidelines don’t provide adequate health protection and defensive action is recommended in accordance with the level of individual immunosuppression. Additional research is needed to evaluate current protective measures and development of new strategies.

Municipal tap water supplies, limited by conditions of water stagnation and biofilm build-up in distribution pipelines, fail to meet water quality needs of hospital wards serving severely immunocompromised patients. The best methods of control include the use of sterile water for high-risk populations, treated at the point-of-use. Effective and low-cost water sterilization methods (i.e., boiling for three minutes) are readily available in this country and have proven effective for preventing nosocomial waterborne infections.