Summary: Recent studies regarding ultraviolet (UV) lamp pressure and its effects have forced many water treatment professionals to stand up and take notice. A good portion of the research involves repairing DNA despite use of both low-pressure and medium-pressure UV lamps. Here’s one interpretation of the studies’ results.

It’s well known bacteria and other microorganisms are capable of repairing their DNA following damage by ultraviolet (UV) radiation. Known as “reactivation,” it’s a natural defense mechanism that evolved over millions of years. Some microorganisms need visible light to repair their DNA (known as “photoreactivation”) while others can repair it without light (“dark repair”). This self-repair ability poses obvious problems when UV disinfection technology is used to treat potable water, swimming pool water, effluent or other liquids.

There are two main types of UV disinfection technology currently in use—low pressure and medium pressure. Low-pressure UV lamps contain mercury gas at a low pressure (<10 torr—a measure of vacuum stability and pressure) that, when excited by an electrical charge, emit UV light at 254 nanometers (nm). Medium-pressure lamps contain mercury gas at much higher pressures (~1,000 torr). These lamps produce UV of a higher intensity and over a broader range of wavelengths than low-pressure lamps. 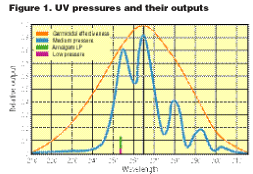 Effects of UV light
The UV section of the electromagnetic spectrum is divided into three main wavelength ranges, which have different effects on DNA, RNA and other molecules (such as enzymes) within the cell. The main UV spectra with a damaging effect are UV-C (200-280 nm), UV-B (280-315 nm) and UV-A (315-400 nm). Low-pressure UV lamps have a peak output of 254 nm while medium-pressure lamps have a broader output between about 185 and 400 nm (see Figure 1).

According to research, DNA has its maximum absorption at both 200 nm and 265 nm.1 Maximum absorption doesn’t occur at 254 nm—the wavelength produced by low-pressure lamps and often incorrectly assumed to be the optimum wavelength for killing microorganisms. At 200 nm, most absorption occurs in the “backbone” DNA molecules of ribose and phosphate. At 265 nm, UV absorption mainly occurs in the nucleotide bases—adenine, guanine, cytosine and thymine (and uracil in RNA). The most common products resulting from damage by UV radiation are thymine dimers, which are formed when two adjacent thymine molecules become fused. Formation of these dimers and other photoproducts prevents DNA from being able to replicate, thus effectively killing the cell. In some cases, UV is effective above 265 nm. It has been shown, for example, that the optimum wavelength for destroying Cryptosporidium parvum oocysts is 271 nm2 while the optimum wavelength for Bacillus subtillis is 270 nm.3

In addition to DNA and RNA, UV also causes photochemical reactions in proteins, enzymes and other molecules within the cell. Absorption in proteins peaks around 280 nm, and there’s some absorption in the peptide bond (-CONH-) within proteins at wavelengths below 240 nm. Other biological molecules with unsaturated bonds may also be susceptible to destruction by UV. Some examples include coenzymes, hormones and electron carriers. The ability of UV to affect molecules other than DNA and RNA is particularly interesting in the case of larger microorganisms such as fungi, protozoa and algae. In these microorganisms, although UV may be unable to penetrate into the cell to the DNA, it could still have a lethal effect by damaging other molecules.

Recovery from UV damage
The need to recover from (reactivate or repair) UV damage is common to virtually all microorganisms regularly exposed to UV light in nature. The ability to reactivate varies significantly depending on the type of UV damage inflicted and level of biological organization of the microorganism. The repair mechanism isn’t universal and there are no clearly defined characteristics determining which species can repair themselves and those that cannot.

The part of the cell most vulnerable to UV damage is the DNA (or RNA) because it’s the depository for the cell’s genetic code, and has a highly complex structure. It’s hardly surprising that all known molecular repair mechanisms have evolved to act upon the macromolecular nucleic acids, particularly DNA. In photoreactivation, repair is carried out by an enzyme called photolyase, which reverses the UV-induced damage. In the case of dark repair, it’s carried out by a complex combination of more than a dozen enzymes. To begin reactivation (both light and dark), these enzymes must first be activated by an energy source. In photoreactivation, this energy is supplied by visible light (300-500 nm) and, in dark repair, it’s provided by nutrients within the cell. In both cases, reactivation is achieved by enzymes repairing the damaged DNA, allowing replication to continue (see Figure 2).

Common strains of E. coli contain about 20 photolyase enzymes, each of which can repair up to five thymine dimers per minute. This means that, in a single cell, up to 100 such dimers can be repaired per minute. One milliJoule per centimeter squared (mJ/cm2) of UV produces approximately 3,000-4,000 dimers4 so, theoretically, damage induced by 1 mJ/cm2 of UV can be repaired in just 30 minutes.

Repair after exposure
Low-pressure UV lamps have traditionally been used in water treatment plants because their UV output at 254 nm closely matches the absorption peak of DNA bases at 265 nm. A number of studies, however, have shown microbial DNA is capable of photoreactivation after exposure to low-pressure UV.5,6 Because of these findings as well as increased use of medium-pressure UV lamps in water and effluent treatment, recent research has begun to look at whether medium-pressure UV can permanently inactivate microbial DNA. It’s been suggested the broader wavelengths emitted by medium-pressure lamps not only damage DNA but also cause damage to other molecules, making it more difficult for cells to repair their DNA. UV-A is known to affect membranes and membrane functions, while UV-B and UV-C are shown to be absorbed by proteins.7 All these wavelengths are produced in abundance by medium-pressure UV lamps.

Research compared effects of low-pressure and medium-pressure UV on ability of microorganisms to repair their DNA.8,9 In tests, researchers compared the ability of E. coli to recover in photoreactivating light after being exposed to 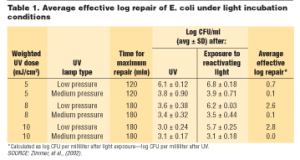 different amounts of low and medium-pressure UV. E. coli was used in the study as it’s a useful “biological indicator” of disinfection efficiency in water systems (see Figure 3). Results of both studies showed a significant difference in photoreactivation following low and medium-pressure radiation. While high levels of photorepair were observed after low-pressure irradiation (with maximum repair occurring after two to three hours), there was virtually no photorepair after medium-pressure treatment. This was particularly the case at higher log reductions, i.e., log 3 and above (see Table 1).

Researchers proposed a number of reasons why medium-pressure UV causes irreparable damage while low-pressure UV doesn’t.8 One hypothesis is there’s a synergistic effect between various wavelengths emitted by medium-pressure lamps that causes irreparable damage to the DNA. Another possible explanation is the repair enzymes themselves are damaged. For example, it was shown that absorption by proteins in the UV-B and UV-C regions was equal to absorption by DNA at 265 nm.10 According to one study, while absorption of UV by proteins is considered of little importance to cells, any damage to repair enzymes would be critical since so few are present in the cell.8

All these studies concluded polychromatic, medium-pressure UV radiation was more effective than monochromatic low-pressure UV at causing permanent, irreparable damage to the DNA of E. coli.

Interpreting the findings
The implications of these findings are far-reaching. For any industry where UV is used to disinfect water or effluent, the operator must ensure that treatment is permanent. This is especially the case when the treated liquid will subsequently be exposed to sunlight. Some suggest medium-pressure UV could therefore provide better protection against 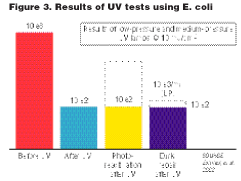 photoreactivation if UV treatment occurs prior to any processes in which water is exposed to light for even a short time (30-180 minutes).8 According to the study, “Using low-pressure UV in this type of situation should be avoided, since repair occurs rapidly following exposure to light.”

Applications affected by these findings include anywhere the treated water or effluent is subsequently exposed to light such as wastewater, bottled water, fisheries and swimming pools. Also important, due to the possibility of dark repair, are drinking water and process water applications. One study recommended that further research be carried out with medium pressure to determine precisely which wavelengths cause the additional damage and where the damage occurs.8 It also recommended further research involving wastewater treatment plants.

It’s still not clear exactly what wavelengths, or combination of wavelengths, cause this permanent deactivation of the DNA. As suggested, however, it’s the very fact medium-pressure lamps produce such a broad output across the spectrum of UV light that creates this desirable effect.8

About the author
David L. McCarty is president of Aquionics Inc., a specialist in UV light technologies for wastewater, water, surface and air purification processes. He holds bachelor’s degrees in microbiology and chemistry from Ohio State University. Prior to joining Aquionics, McCarty was chief microbiologist for the City of Columbus, Ohio water & wastewater division. He can be reached at email: davem@aquionics.com