Summary: With activated carbon such a conspicuous component in the POU/POE industry, many water treatment dealers take its safety and efficacy for granted. One company set out to test this theory. The results, taken over a two-year study, may surprise you. 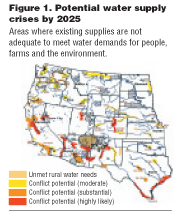 Activated carbons are broadly used in POU/POE devices as well as many municipal-scale, 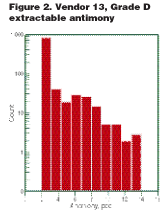 potable water treatment systems. These activated carbons are usually derived from various types of coal (i.e., anthracite, bituminous, lignite) or natural materials such as wood and coconut shell. There have been concerns about the amount of naturally present arsenic, antimony and aluminum that can be extracted from these materials when used to produce potable water. With revision of the U.S. Environmental Protection Agency (USEPA) arsenic standard in potable water from 50 parts per billion (ppb) to 10 ppb, many users may not be aware of the extent of these extraction problems and their possible impact on selecting activated carbons for use in POU/POE applications.

To help understand the extent of the toxic trace element problem in activated carbons, a multi-year study of the extractable amounts of arsenic, antimony and aluminum in activated carbons sold for use in POU/POE applications was initiated. With results for more than two years, this article reports only on the arsenic and antimony results of that study, as extractable aluminum can be controlled by most manufacturers through use of basic, acid-washing procedures. 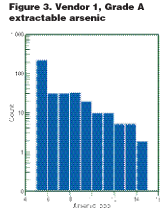 Gathering test subjects
A broad range of activated carbons (39 grades from 19 manufacturers) were obtained for the study. Coal-based carbons were, in almost all cases, acid-washed, while coconut-shell carbons were mostly water rinsed. Each was selected by the manufacturer to represent its best available carbon containing the lowest possible extractables. Hence, the samples received were all used in the POU/POE industry, many being NSF Standard 61 or 42 registered. It’s important to point out that a less careful selection of grades for testing would have potentially demonstrated a much more severe extractable arsenic and antimony problem.

In a second part of the study, two grades of coal-based activated carbon were selected—one from a domestic source and the second from an off-shore source—and a total of 1,600 trace element extraction assays were performed for individual production lots (usually 10,000 to 44,000 pounds of activated carbon in each lot) over more than two years. The number of tests ranged from no less than three samples per lot up to a maximum of 10 tests from different 1,000-pound bags within the same lot. During this systematic and long-term study, the goal was to see if these world-class manufacturers of activated carbon could sustain extractables below current USEPA requirements. 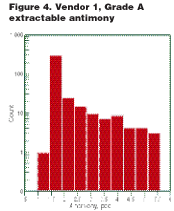 A different approach
The extraction assay method represents the NSF Standard 42 procedure generally applied during the late 1990s (see FYI: Details). NSF Standard 42 extraction protocol has been amended over the years, and today this method differs from the method applied in this study; however, the goal was to observe how activated carbon purity varied over an extensive period of time using a single consistent method of analysis. 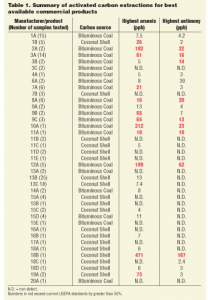 Table 1 shows the test results on the different high-purity grades of activated carbon sold within the POU/POE industry. As indicated, some carbons didn’t meet current NSF or USEPA standards for either arsenic (10 ppb) or antimony (6 ppb) during a 72-hour extraction test. What’s alarming about these results is that a high percentage of coal-based activated carbons (those supplied by 12 out of 15 manufacturers) didn’t meet current standards, and seven manufacturers supplied product five times the limit or higher for at least one toxic element.  In effect, the probability that one can purchase coal-based activated carbon that is low in toxic extractables is very poor.

Cracking the shell
Many people think coconut shell carbons are intrinsically less likely to display high concentrations of extractables. Four out of nine manufacturers of coconut shell activated carbon, however, did not meet the arsenic standard. In some cases, extractable levels of arsenic and antimony rose to very high levels (one coconut shell-based carbon product contained levels that would potentially represent an immediate acute toxic hazard).

Additional studies have shown no correlation between extractable arsenic and antimony and other properties of these products. In addition, bulk elemental assays by such methods as X-ray fluorescence have shown no correlation to the quantity of elemental arsenic or antimony that is extractable from these samples. Because of the extremely poor results listed here, one should be concerned about those users who specify activated carbon that isn’t acid-washed or selected for purity. These grades make their way in large volumes into both the POU/POE industry and in even higher volumes into the municipal water treatment market.

Next, two grades of coal-based activated carbon we

re selected for much more detailed and long-term analysis. Both grades were 12 × 40 mesh, nominal 1,000 square meter per gram BET surface area (as determined by nitrogen adsorption), acid-washed, bituminous coal-based carbons that were pulverized and then re-agglomerated and purchased on the same specification.  These grades were chosen as representing the best state-of-the-art materials available to the POU/POE industry for routine applications.

Figures 1 and 2 summarize arsenic and antimony concentrations measured for Vendor 13, Grade D over this period. Five production lots exceeded arsenic standards, but only one lot by a significant amount. But, extractable antimony exceeded targets approximately 70 times, although only five times by a factor of two.

Figures 3 and 4 summarize arsenic and antimony concentrations measured for Vendor 1, Grade A. Extractable arsenic exceeded limits approximately 37 times, but in no case by more than a factor of 50 percent. No sample contained extractable antimony above the required limit.

These results demonstrate that even exceptional suppliers have their bad days. In the case of Vendor 13, antimony problems occurred annually during springtime following a planned maintenance period, and there wasn’t a successful diagnosis of why this happened. Vendor 1 demonstrated a completely random pattern of extractable arsenic and antimony concentrations, i.e., problems occurred infrequently, not to a severe degree, and without a discernable pattern.

What was learned
These results demonstrate that limited testing or certification of activated carbons based upon a small statistical sample—as currently applied by ANSI/NSF procedures—isn’t likely to provide accurate guidance on product quality and sustainable control of arsenic and antimony extractables from POU/POE activated carbons, even with the best manufacturers and their best available grades. Only a small fraction of current manufacturers have the means to produce clean product with low extractable arsenic or antimony. In fact, only a handful of coal-based activated carbon producers can meet these standards on a continuous basis.

Although outside the scope of research, these results indicate that the use of bituminous coal-based activated carbons—not acid-washed or otherwise treated to provide low levels of extractable arsenic and antimony—represent a significant and unrecognized problem for municipal water treatment facilities. This is because it is unlikely that you’ll observe methodical monitoring of these extractables during start-up of large municipal carbon beds; and, in some cases, extensive rinse-up of the beds would be required to drive concentrations down to low values.

Conclusion
Continuous and comprehensive testing of activated carbon for extractable toxic elements appears to be the only available means to ensure the reliable purity of received activated carbons, and members of the POU/POE industry are urged to institute appropriate controls. In 2000, a TSCA Section 8(e) report was filed with the USEPA regarding these problems. This filing served to shield the point-of-use/point-of-entry (POU/POE) water treatment industry from liability and prosecution under the Toxic Substances Control Act for distribution of products known to expose users to a hazardous chemical. As a result of this filing, the most severe potential penalties for use of contaminated activated carbons have been mitigated for the entire industry; but this filing does not provide a shield against legal prosecution under state statutes such as California Proposition 65.

Michael J. Rook is the technical support manager for KX Industries. He can be reached at email: mrook@kxindustries.com

Meedia A. Kareem is a microbiologist at KX Industries.