Have you ever come across a bottle of prescription pills you no longer needed or perhaps had passed their expiration date? You probably disposed of the substance by flushing the remainder down the toilet or tossing it in the waste disposal. Gone and forgotten, right? Well, forgotten yes, but gone? Probably not.

Scientists are becoming increasingly concerned about the potential public health impact of environmental contaminants originating from industrial, agricultural, medical and common household practices, i.e., cosmetics, detergents and toiletries. A variety of pharmaceuticals including painkillers, tranquilizers, anti-depressants, antibiotics, birth control pills, estrogen replacement therapies, chemotherapy agents, anti-seizure medications, etc., are finding their way into the environment via human and animal excreta from disposal into the sewage system—i.e., flushing unused medication down the toilet—and from landfill leachate that may impact groundwater supplies. Agricultural practices are a major source and 40 percent of antibiotics manufactured are fed to livestock as growth enhancers. Manure, containing traces of pharmaceuticals, is often spread on land as fertilizer from which it can leach into local streams and rivers. Conventional wastewater treatment isn’t effective to eliminate the majority of pharmaceutical compounds.

Little is known about the occurrence, transport, fate, synergistic, accumulative, and/or long-term effects of pharmaceuticals and other personal care products following their end use. Currently, there’s no national coordinated effort requiring the monitoring or focused treatment of waters and wastes for the presence of pharmaceuticals; however, pharmaceutical contamination is considered an important and emerging issue in water quality.

Prevalence in the environment
The prevalence of pharmaceuticals in water is nothing new. In fact, it’s reasonable to assume that as long as pharmaceuticals have been in use, they—and their metabolites—have contributed to the overall environmental contamination load. What’s new is our ability to detect trace amounts (sub-parts per billion, ppb) of these contaminants in water. Hence, we’re finding pharmaceuticals in water because we’re finally able to detect them. The topic first gained notice in Europe in the early-1990s where scientists initially found clofibric acid, a cholesterol-lowering drug, in groundwater.

During 1999-2000, the U.S. Geological Survey conducted the first nationwide investigation of the occurrence of pharmaceuticals, hormones and other organic contaminants in 139 streams from 30 states. A total of 95 contaminants were targeted including antibiotics, prescription and nonprescription drugs, steroids and hormones, 82 of which were found in at least one sample. Although researchers caution that sites were chosen based on their increased susceptibility to contamination from urban or agricultural activities, a surprising 80 percent of streams sampled were positive for one or more contaminant. Furthermore, 75 percent of the streams contained two or more contaminants, 54 percent had greater than five, while 34 percent had more than 10 and a whopping 13 percent tested positive for more than 20 targeted contaminants.1 Similar reconnaissance studies are ongoing to evaluate the presence of pharmaceuticals in groundwater and surface water sources of drinking water.

Exposure concerns
Pharmaceuticals have since been found in treated sewage effluents, surface waters, soil, and tap water, though at very low levels (parts per trillion, ppt). These levels are unable to induce acute effects in humans, i.e., they’re far below the recommended prescription dose, but have been found to affect aquatic ecosystems. To date, most attention has been focused on hormone disruption in fish due to pharmaceutical estrogens present in the environment, and the rise of bacterial pathogens resistant to conventional antibiotic treatment due, in part, to their exposure to sub-lethal levels of antibiotics in their environment. Antibiotics and estrogens are only two of many pharmaceuticals suspected of persisting in the environment either due to their inability to naturally biodegrade or continued prevalence as a result of continuous release. Other studies have shown antidepressants to trigger premature spawning in shellfish while drugs designed to treat heart ailments block the ability of fish to repair damaged fins.

Recent monitoring studies fail to address one question: Are the levels of pharmaceuticals in the environment significant? At first glance, one would say “no” since levels found in the environment are six to seven orders of magnitude lower than therapeutic doses in spite of the fact up to 90 percent of an oral drug can be excreted in human waste. Low and consistent exposures wouldn’t likely produce acute, notable effects but rather subtle impacts such as behavioral or reproductive effects that could very well go unnoticed. The good news is any threat to human health is probably not imminent but rather long-term.

What about the unintended contact points, i.e., ingestion of topical medications present in the environment that were washed off the initial application site such as the skin? Side effects to medications given at prescription doses are common but generally outweigh the derived benefits. This isn’t the case with unintended, routine exposure to these drugs or a mixture of drugs found in the environment. What about risks to developing human fetuses or persons with drug allergies? In addition, concern remains over the increasing practice of artificial recharge of groundwater with sewage effluent where pharmaceuticals have been found to percolate into the groundwater. Some common pharmaceutical contaminants are known to persist for more than six years in the sub-surface or groundwater.

Control mechanisms
With tens of thousands of man-made and naturally occurring chemicals listed as possible environmental pollutants, it’s an overwhelming task to routinely monitor the prevalence of more than a handful. The good news is removal methods designed for elimination of one contaminant are likely to be effective for many other similar contaminants. The bad news is conventional water and wastewater treatment methods allow many classes of pharmaceuticals to pass through unchanged.

Submitting to the fact that pharmaceuticals are likely to be present in our environment, and conventional wastewater treatment is ineffective at their removal, research has recently focused on the ability of current drinking water treatment technologies to remove pharmaceutical contaminants. A study of selected pharmaceuticals in treated effluent discharged upstream from drinking water intakes, raw drinking water, and finished drinking water from a watershed in metropolitan Atlanta determined that the number of drugs detected decreased from 16 to 10 to three, respectively.2 The drugs found in finished water were all non-prescription varieties such as caffeine, nicotine and acetaminophen. 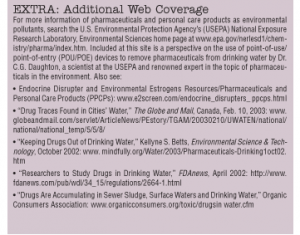 Advanced water treatment technologies have been evaluated for their efficacy in removing the most common pharmaceuticals from drinking water. Oxidation of pharmaceuticals during conventional ozonation has proven effective where relatively low doses of ozone were capable of complete transformation of the select pharmaceuticals tested.3 Certain common pharmaceutical compounds are effectively removed by additional, advanced oxidation practices, i.e., ozone and ultraviolet (UV) or ozone and hydrogen peroxide. In addition, membrane filtration and filtration with granular activated carbon are thought to be highly effective. Nano-filtration and reverse osmosis eliminated all drugs tested.4 Chlorine, the most popular drinking water disinfectant used in the United States, was found to be much less effective than ozone.

Although use of advanced water treatment technologies could greatly reduce the risks of pharmaceutical exposures via drinking water in addition to a host of other contaminants, certain pharmaceuticals have been found to be especially recalcitrant. Certain compounds persisted in the presence of up to 15 milligrams per liter (mg/L) of ozone and other advanced oxidation processes (ozone/UV-low pressure mercury arc).5 Complicating matters further, toxic metabolites may be created following oxidation procedures.

Conclusion
So, what is the true risk assessment of pharmaceuticals and the like in water? Do they present a health threat to humans and/or wildlife exposed? The truth is, no one knows. Some scientists believe the exposure levels are so low they’re ineffective. Others are concerned about long-term, chronic and combined exposures to agents designed to cause a physiological effect in humans. Many more scientists agree we should be concerned about aquatic ecosystems where sperm levels and spawning patterns in aquatic organisms have been clearly altered in environments heavily polluted with a class of hormone-altering pharmaceuticals known as endocrine disrupters.

With a growing and aging population as well as increased reliance on drug treatments, and development of new drugs, the problem with pharmaceutical contamination promises to also increase. Drugs are obviously necessary for the health and well being of individuals, not to mention the optimization of livestock development. So, how do we begin to control environmental contamination? Source control aimed at medical disposal practices may be an effective first step. Designing more environmentally friendly chemicals, minimizing overuse and misuse of drugs, and point-of-use treatment are all potential control approaches worth exploring should scientists determine a significant risk. Therefore, reduction of pharmaceutical contamination in the environment will involve both advanced waste and water treatment technologies and source control at the point of entry into the environment. These issues are all topics of ongoing scientific research.