Down Home with the Lilleys in the Tar Heel State: Bud’s Water Conditioning Inc., of Camden, N.C. 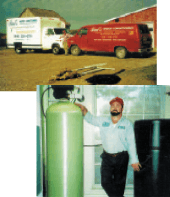 There it is hanging from Edgar “Bud” Lilley, Jr.’s office wall. As he looks around the office, he would be hard pressed to find anything else that brings him more pride. Is it the first dollar or check he ever received for his work in the water treatment business? No. It’s his graduate equivalency diploma, or GED.

Why would an already successful businessman want a GED in the worst of ways? “I wanted to get my GED because it was hard for me to tell my kids how important an education is when I didn’t have one myself,” he says. In fairness to the owner of Bud’s Water Conditioning, of Camden, N.C., a formal education didn’t lead off Lilley’s priorities at a young age. He had bigger fish to fry or, in this case, trees to chop down.

Humble roots
As he recalls, “Growing up, I had five sisters. I had two brothers that died when I was 5 years old. My parents always lived on a farm in the country. We lived in tenant housing. I would go out and cut firewood (to help with the family chores). My dad always had two jobs so I needed to help. I remember when my mom used to put cardboard in my shoes so my feet wouldn’t be in direct contact with the ground, and I always had second-hand clothes. So, I was brought up as poor as anyone could have been.”

Feeling overwhelmed and admittedly not interested in school, Lilley received permission from his parents and dropped out of school in the eighth grade at 16 years old. The elder Lilleys had one stipulation, however—their only son would have to get a job. Unfortunately, the job market in the late 1960s wasn’t too promising in Washington, and that’s not the state of Washington nor the one in the District of Columbia, but the tiny town of Washington, N.C.

Influential mentor
Still, Lilley was determined to justify his dropping out of school. He recalls, “I was promoted to the ninth grade, but I never went back to school. A friend of mine was working with Swain Softwater Service in Washington. The owner, Mr. Swain, couldn’t lift salt too well so he hired my friend when he had salt routes. Mr. Swain, knowing I was looking for a job, asked me if I also wanted to help him with some salt routes. I did that for about a month and he asked me if I would like to work with him permanently.”

This served as Lilley’s introduction into the water treatment industry. Some 44 years later, Lilley never forgets what Swain meant to him during a difficult time in his life: “He was like a dad to me. He took the time to explain to me how a water conditioner worked, and I guess I was just cut out for that kind of work. It just came easy to me.”

After working for Swain for 2-1/2 years, Lilley went to work for Servisoft, a bigger company based in Elizabeth City, N.C. One drawback was that Lilley was driving 180 miles to and from work every day. He was also a newlywed. Things had to change and both Lilley and his boss knew it. Finally, the latter lured Lilley and his wife to Elizabeth City with the promise of a raise and help finding and buying a house. Within two years, the company was sold to Water Care, where he worked for four more years. He says, “It was hard at the time because I would get used to working one company’s equipment and then they would switch on me.” Culligan eventually bought Water Care and Lilley worked for the franchise for 7-1/2 years. 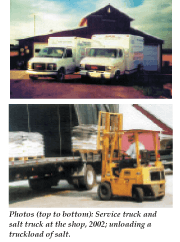 Perhaps seeking more stability, Lilley found a job with a gas propane company and worked there for four years. Still, he would get calls from familiar customers who wanted their water treatment repaired. By that time, Lilley had remarried (to his wife of 20 years now, Brenda). Then, one day, Lilley came home from the gas company and shared a leap of faith with his wife—he thought he could make a living doing solely water treatment. Unconvinced at first and pregnant with their child while four other kids lived with them, she relented and Lilley soon thereafter paid a visit to a lending institution.

Silence is not golden
“I went to the bank and borrowed $3,000, and I bought a couple of water conditioners and telephones were put in. I had the office in my house at the time. I put an ad in the newspaper with my picture so everybody could recognize me,” he says. And then something terrible happened: “For the first two weeks, the telephones did not ring. I said to myself, ‘I quit a good job at the gas company for this?’”

This went on for two more weeks. Then, like magic, the phones started ringing off the hook. Sixteen years later, Lilley is going strong at his family-run business. Brenda and the three sons are involved in it as well—she is the vice president and administrative assistant; Kevin, 26, conducts salt routes, service work and installations; Brian, 19, also does salt routes and some service work, and Nathan, 16, works part-time on service work and installing pumps. One daughter, Amy, files and does some bookkeeping when the Lilleys go on vacation or are away from the office. The other daughter, Tina, is from Lilley’s first marriage and works outside of town.

Barn to the penthouse 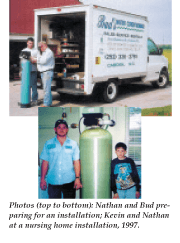 Bud’s Water Conditioning is one of the few independent water treatment dealers in the state. Lilley, a certified installer, used an extra bedroom in the house as his office for the first three or four years. This is no longer necessary. A new office was built 12 years ago—a barn about 50 yards behind the Lilleys’ home was renovated into a 1,600 square-foot shop—and two other smaller buildings (360 and 160 square feet) were built to store plumbing equipment, water conditioners and reverse osmosis (RO) units. The main office also has a room upstairs for storing filters and more plumbing fixtures.

Besides selling water conditioners and RO units—his fastest growing products—the business also carries chemical contaminant systems and rents water conditioners. For his equipment, Lilley turns to companies like Fleck, Kavey Water Equipment, Aqua Wholesale Inc., Goulds Pumps, USFilter and Cargill. He says that one of his main industry influences has been Kavey: “(He) has always treated me fairly. He has never doubted me. Wherever he went—Inaqua, KISS International, Kavey Water—I would follow him. I think the world of Bill Kavey.” To get the 882 bags of salt (every two to three weeks) to customers as well as making service calls, Lilley enlists three vans and a PT Cruiser, which he uses the majority of the time. Predictably, most of Lilley’s 1,000 customer accounts originate in the residential sector (75 percent) while commercial accounts like nursing homes and restaurants make up the remainder.

In the mid-1990s, Lilley featured bottled water as a product option to his customers. After seeing a television program—he believes it was either 60 Minutes or Dateline—questioning the quality of certain bottled waters, he was inclined to cut strings with his entire line. He explains, “I thought it would look nice to have a water cooler in a doctor’s office with my name and business on the bottle. One day, I remember seeing a special report… that said 60 or 70 percent of all bottled waters weren’t potable. I just didn’t like the idea that I was unaware of the purity of the bottled water I was getting. So I got out of the business and started selling RO units. About half of my (bottled water) customers switched over and bought RO units.”

Addition by subtraction
In retrospect, Lilley doesn’t regret getting out of the bottled water business just as it was ready to post record numbers. He believes that, in the long run, it probably helped the exponential growth of his business. “If I had stayed in that bottled water business, I know it would have grown,” he reasons. “I had many bottled water customers, but… I would have also had to have bought two or three more trucks or hired two and three more employees. I’m just not into that. As long as I can make a decent living, which I’ve done, that’s all that matters. For every extra man or extra truck, that is just extra headaches.”

For a man who puts so much stock into exceptional customer service, Lilley can afford to reflect in a casual way. Aside from his business name on the side of his service trucks, he relies heavily on word-of-mouth referrals for new business. He admits to having a billboard off the main road connecting Elizabeth City and Camden, which is 40 miles from the Atlantic Ocean.

“We stay busy; sometimes we work long hours,” Lilley says. “We try to make it five days a week but occasionally we have to work on Saturdays. Whenever a customer calls me, I make it a point to find out where he/she heard about me.”

That kind of painstaking approach has, on more than one occasion, caused others to say that he goes overboard in trying to meet customer’s expectations. Lilley explains, “My boss at Culligan taught me to be thorough. My sons say that I am too much of a perfectionist but I take pride in my work and installations. I have seen some sloppy work out there.”

And ‘out there’ translates into Lilley’s municipal water and well water customers being split 50/50. Personally, he prefers well water to the local “county” water. “I have had customers tell me drinking the county water is like drinking a glass of Clorox,” he says. One must wonder who would even know what a glass of Clorox tastes like, but you get his point. Lilley has worked in seven different counties in North Carolina and Virginia, and trihalomethanes are fairly prevalent. At home, he has a well that’s 100 feet deep with 13 grains hardness, 2.5 parts per million of iron, no acidity and no coliform bacteria.

Conclusion
No one knows how hard it has been to build a business from scratch more than Lilley. Yet, he’s content with his lot in life. If his sons continue the business, he would be happy. If Lilley were to sell it so he and his wife could enjoy their retirement years with more time for weekend drives to Atlantic City, then he would still be grateful.

“Before I went into business for myself, I didn’t own a house,” he says. “To make a long story short, I now have a two-story house that has been completely renovated inside and has a swimming pool. I also have classic cars including a ’64 GTO convertible (completely restored), a ’67 GTO (completely restored), a ’53 Pontiac, and a ’57 Pontiac that I sold. I have also made some good investments over the years. Plus, everything is paid for.”

If the business were to be sold, Lilley would have one request of the new owner—he or she would have to move the business from behind his house to a new location. Regardless of who the business owner is, it’s still a long way from stuffing shoes with cardboard.