According to the 2003 United Nations (U.N.) World Water Assessment Program, “The simple truth about freshwater is that the world’s supply of it is dwindling as demand for it is growing. This is an unsustainable equation for the future of the planet.” Furthermore, all signs suggest it’s getting worse and will continue to do so, unless corrective action is taken.

A question of survival
“Of all the social and natural crises we humans face, the water crisis is the one that lies at the heart of our survival,” said Kochiro Matsuura, the director general of UNESCO, the umbrella organization for U.N. research and education projects. Among the threats to health are waterborne diseases that cause illnesses such as diarrhea from drinking contaminated water or poor hygiene compromised by a lack of proper sanitation facilities. In 2000, it’s estimated that 2.2 million people died due to diarrhea caused by bad water, and other water-associated diseases. The majority of those affected were children under the age of 5. The tragedy is that these health problems are largely preventable; however, it gets worse.

Over the next 20 years worldwide, the average supply of water per person is expected to drop by a third, and it’s already in short supply. At present, 1.1 billion people lack access to improved water supplies, and 2.4 billion people don’t have proper sanitation. According to U.N. projections, by 2050, at least 2 billion people in 48 countries will be seriously short of water. When you factor in population growth and climate change, the impact grows to 7 billion people in 60 countries. In the meantime, overall water quality is expected to worsen from pollution and rising temperatures.

Water wars
There has been much talk about the prospect of “water wars” breaking out over dwindling supplies. Frequently, water is described as one of the most destabilizing factors in Middle East peace talks. With the war in Iraq now largely behind us, the instability in the region will be exacerbated by the growing competition for scarce water supplies. For example, in September 2002, the BBC News reported, “An alleged Lebanese scheme to divert water from a river feeding Israel’s largest reservoir could provoke a war, Israeli Prime Minister Ariel Sharon has warned.” For years there have been threats to peace in numerous nations over the allocation of water. The United Nations echoes the concern saying, “Severe water shortages already hamper development in many parts of the world, and the situation is deteriorating.”

I’ve also worried, and written extensively, about the potential threat to peace that disputes over water present. I have frequently pointed out that the value of water is considerably greater than even the value of oil. I have routinely pointed out that, “Without water people die, but without oil we are merely inconvenienced.” Embracing the value of water argument, it was easy to accept the threat to peace argument. Moreover, history has chronicled numerous instances where wars were indeed fought over water. Nonetheless, I no longer believe the threat to be as grave as I once thought. That is because I believe that conditions today are considerably different than they were years ago.

I recently read a statement attributed to an Israeli Defense Forces analyst who said, “Why go to war over water? For the price of one week’s fighting, you could build five desalination plants. No loss of life, no international pressure, and a reliable supply you don’t have to defend in hostile territory.” I don’t have any idea what has already been spent in the Iraq war, but it’s very obvious that a war over water would be pointless. A better battle to wage would be with those who resist building desalination plants. 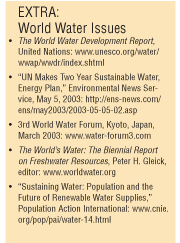 Desalination
It’s now technically and economically feasible to produce large volumes of high-quality water through the desalination of seawater, brackish water, or reuse of other waters. Capital costs as well as operation and maintenance expenses are rapidly falling. The sea is a virtually unlimited source of water. The challenge is to convert the seawater to fresh water, by desalination, at low cost. Much of this challenge will be met by altering the bureaucratic impediments that have become fixtures over the past few decades. Many of those in power, in various water agencies, are reluctant to change.

I’m not suggesting we ignore water problems, and I know that scarce water supplies in numerous areas can be a considerable threat to our economy and other nation’s economies and health, but there are solutions. In my view, much of today’s worldwide water problems are really about economics. Despite all of the concern about water shortages, we have no shortage of water but rather a shortage of cheap water. That is to say, we’ve already tapped the easily accessible sources of water, we’ve dammed most of the major rivers, and we’ve drilled wells in most regions. Therefore, what we’re left with are water sources that are more expensive than the easy-to-tap rivers.

Showdown in the West
In the United States, we’ve usually managed water supplies by manipulating the country’s freshwater supplies to meet the needs of users. Instead, we need to manage the use of water, not supply. Struggling with reduced supplies of water in the West (see the U.S. Department of Interior Report “Water 2025: Preventing Crises and Conflict in the West”: www.doi.gov/water2025/), the focus is becoming one of water management and conservation. We need to focus on optimizing the use of our existing water supplies rather than on the further development of storage reservoirs and aqueducts. We must develop more efficient irrigation techniques and utilize other water conservation measures including lining irrigation canals and installing more efficient plumbing fixtures in homes and office buildings. 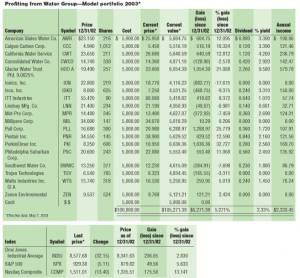 One of the biggest uses of water in the West is agriculture. Irrigated agriculture remains the overwhelmingly largest use of water in the United States, although irrigation’s share of total water use is declining. Nationally, irrigated cropland has expanded over 40 percent since 1969 while water applied to fields has declined about 20 percent. The total quantity of irrigation water used has increased about 15 percent since 1969. Now, here’s the real problem. Nationally, irrigation water—in some regions—costs as little as $32 per acre-foot. There’s no way that price reflects the “real cost” of water. The “real cost” includes the cost of capturing the water, treatment and distribution. A full cost assessment would also include the power costs necessary to pump water over mountains, through canals, and to distribution centers. Those costs are ordinarily absorbed by the states and local governments under other budget lines and aren’t directly included with the price of water.

Conclusion
The case I’m making is that the growth in the water industry will come from the application of processes, products and services that offer ways to mitigate the impact of higher water prices. Increasingly, point-of-use/point-of-entry (POU/POE) drinking water treatment devices play a critical role due to stricter regulations, highlighted by new standards for arsenic and radium. This would also include products and systems that enable increased use of presently available water supplies. Among the areas to focus on—from an investment point of view—include desalination, purification, and advanced or improved methodologies of irrigation. An investor electing to focus on these areas is likely to do very well over the next few years.

About the author
Neil Berlant is first vice president and managing director of the Water Group at The Seidler Companies Inc., of Los Angeles. Prior to that, he was with Wells Fargo Investments, First Security Van Kasper and UBS PaineWebber. Since 1986, Berlant has concentrated exclusively on business and investment opportunities in the water industry. He has been interviewed on a number of occasions by The Wall Street Transcript. He can be reached at (800) 840-1090 x 625, (213) 955-4990 (fax) or email: neilwater@seidlercos.com