It was online almost a month before the event began, but much of what kept tongues wagging at the Water Quality Association’s 39th Annual Convention in Las Vegas was the Strategic Plan Proposal for reorganizing the association to better fit realities of the point-of-use/point-of-entry (POU/POE) market today.

The WQA posted a PowerPoint presentation of the proposal on its website Feb. 25 while sending out notice in the WQANewsFax for members to begin reviewing the plan. For that reason, only cursory attention was paid to outlining its details at the convention, March 18-22. Even though the plan wouldn’t be approved until Saturday, March 22, at the event’s final board meeting, the majority of discussions were not about modifying it in any way so much as setting up priorities—or “burning issues”—for how it would be implemented. The only requested changes seemed to be retention of the Board of Regents (and certain committees with ongoing agendas) and some language suggestions by World Assembly Division (WAD) members.

Momentum for this began last year in New Orleans where a strategic planning consultant was enlisted to prepare the groundwork for this process, largely because of manufacturer frustration over stagnant membership growth and falling trade show attendance. But one might say it really began in 1997 when the new “Sections” format for the WQA was unveiled, adding a Retail Consumer Products and Commercial/Industrial section to its traditional dealer/manufacturer base and the WAD (itself born in the mid-’90s as an outgrowth of the WQA International Committee). The move five years ago recognized the changing nature of points-of-sale/channels to market for POU/POE products, consolidation and globalization of the industry, and the emergence of the Internet as a tool for education, promotion and marketing.

For the most part, everyone seemed pleased with the strategic plan, so much so that Lynn Kahn—the consultant hired to help the association develop it with a Board of Governors-appointed committee of 12 WQA members—didn’t show up to pitch it. Here’s a synopsis for those of you who may not have been there or visited the WQA website:

It was stressed that the plan itself was merely a shell and filling in the details would be the task of participating section, committee and task force members.

“It’s not really a plan. It’s a reorganization. The plan will flow through this reorganized group to reflect what kind of industry we are today,” said WQA executive director Peter Censky, noting that many committees that asked to continue may simply be reassigned as task forces under one of the proposed four key committees.

There was some confusion about how this would work among both members and WQA staff since Sections would now be in charge of driving the agenda instead of committees. But Censky was confident it would help streamline goals the association undertook as well as sometimes divergent demands on staff time and focus: “The real referee role therefore is now on the board of directors with the board of governors involved also.”

WQA 2003-2004 president James W. Baker put it simply when speaking to the Educational Services Committee: “Just keep on truckin’ as best you can. It will work itself out even though it may take time. A lot of good things have come out from this committee for WQA and it should continue.”

Censky said the BOG will meet May 12-13 to iron out representation on a committee level such as establishing a leadership task force for each section, identifying “burning issues,” evaluating follow-up survey and conference call needs, selecting a nominating committee and determining how sections will choose BOD representatives. On the last point, he said, “It cannot be just a formula handed to them by the board of governors. It’s going to have to evolve how they rotate people on and off the board of directors.”

As the strategic plan evolves, the BOG will evaluate proposed changes, often focusing primarily on member and budget requirements and resources as well as how ongoing consolidation among manufacturers and dealers has affected both, Baker said. In the past two years, the association has run a deficit—tapping into its reserves—while resources have shrunk and regulatory demands have grown. This is particularly true in California, where softener bans are once again emerging and where—Censky points out—new legislation, Assembly Bill (AB) 334, was introduced in April to roll back compromise legislation restricting POU/POE equipment bans under 1999’s Senate Bill 1006 (see Viewpoint, p. 6). 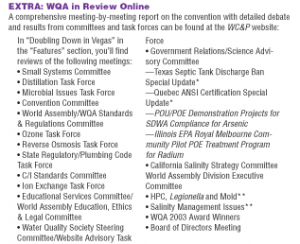 That said, not all was so dramatic at the convention. It was after all Las Vegas, which has a tendency to draw a crowd anyway. WQA was no exception and turnout was so positive that Censky noted serious consideration is being given to having the city host the convention every other year.

Some statistics that underscore this include:

Conclusion
Keeping with a theme of choosing locations where greater concentrations of WQA members might attend, the Mid-Year Leadership Conference is scheduled for Chicago to coincide with the Worldwide Food Expo for which the International Bottled Water Association is merging its convention with this year.

WQA communications manager Jack Ferguson said it wasn’t yet clear whether the Mid-Year dates would coincide or overlap the Oct. 29-Nov. 1 expo (see www.worldwidefood.com), but that information would likely be sent out to members in late April.

Meanwhile, the WQA’s 40th Annual Convention will be hosted by the Baltimore Convention Center from March 16-20, 2004. About 22 percent of the association’s membership lies within a 400 mile radius of the city, and 83 percent of WQA members said they plan to attend with 63 percent driving in by car.