The Fundamentals of Aeration: Narrowing it Down to the Basics

Summary: As more advances are made in aeration technology, water treatment dealers have another viable option at their disposal. Before choosing aeration, however, professionals should consider the water problems and make certain the technology is applicable to deliver a practical solution.

Most of us are able to picture clean, clear water bubbling over rocks in a brook. Splashing water into the air repeatedly over rocks serves to aerate water and expose it to ultraviolet sunrays that help purify the water. This is one of nature’s ways of cleaning water. Aeration, for instance, is the oldest method known for eliminating unpleasant “rotten egg” odor arising from hydrogen sulfide (H2S) in water. The modern day practice of mixing air and water uses principles found in nature to separate unwanted contaminants from clean water through a similar process. A variation of spraying water into air is pumping air into water, or air sparging. Either method may effectively mix air and water, although the transfer mechanisms may differ. Unwanted contaminants or impurities become aerated and some of these oxidized impurities may now be readily separated from water by a process called filtration.

Different processes
Aeration can be a physical process, chemical process, or both. When water containing H2­S, radon, carbon dioxide (CO2) and methane is physically sprayed into the atmosphere, it may be partially or totally evaporated into the air. When an abundant amount of air is blown into the water, the high concentration of air carries the volatile contaminants away, even when the contaminants may be a little heavier than air. With air given the specific gravity of 1, examples of vapors heavier than air are oxygen, hydrogen sulfide and carbon dioxide.1 When water is aerated in an enclosed container—that is, under pressure—gassing off these impurities will be less successful than when the aeration occurs in an open container of low pressure.

Methane, CO2 and radon aren’t likely to be totally removed in the aeration process in a closed container under pressure. Aeration will gas off these contaminants when the container is de-pressurized to allow venting of unwanted gases and then re-pressurized as desired. Conversely, low levels of hydrogen sulfide—less than 5 parts per million (ppm)—may be fully gassed off under pressure. High levels of H2S, in excess of 5 ppm, are removed by utilizing a combination of aeration followed by a carbon filter. This gas is colorless, corrosive, flammable and may be poisonous at high levels, especially in wastewater applications. H2S that’s not fully gassed off will be oxidized. Oxidation of H2S involves a chemical process that converts it to a sulfate precipitate, which may be removed in a carbon filter bed.

Impurities such as iron, manganese and arsenic may be chemically altered in the aeration process when the acidity of the water has been corrected. The combination of the impurity and oxygen forms a bond that’s heavier than water. For example, soluble ferrous bicarbonate, Fe(HCO3)2, may be oxidized and changed to the insoluble iron precipitate ferric hydroxide, Fe(OH)3, and a few other iron species.2 The precipitants may be removed from the water by filtration.

Four methods
1. Air stripping—This is one of the most effective ways to eliminate some impurities that cannot otherwise be physically removed in a typical aeration/filtration system under pressure; however, it may be the most expensive method to aerate water. Radon, CO2 and methane are examples of impurities best removed by air strippers. This method is especially beneficial for separating soluble petroleum products such as fuels and cleaning compounds that have contaminated groundwater. A typical air stripping is shown in Figure 1. 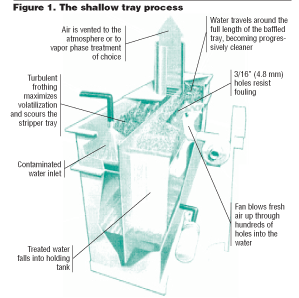 Air is blown through the water that cascades over trays. Additional blowers exhaust the undesirable gasses and excess air from the water, and a booster pump is installed to re-pressurize the system. Pre-treatment may be required to remove the minerals such as iron from the water. If mineral precipitants aren’t removed, mineral deposits will clog the passageways, thus reduce the effectiveness of air strippers.
2. Venturis—Also known as micronizers, these are installed on the well pump line. They restrict the line, increasing water flow to create a vacuum. That vacuum may draw air during the well pump cycle, but the restriction lengthens the time for the well pump to recover. Additionally, the restriction creates back-pressure on the well pump, shortens the life and effectiveness of the well pump system, and increases electrical use. Water flow restrictors interfere with proper filter backwashing in a typical aeration/filtration system. Venturis located on the well line cause precipitation of minerals in the pressure tank system. Precipitation of iron and other minerals may eventually clog pipes. A venturi system installed with a bypass valve opened slightly will reduce back-pressure concerns, but the well system may malfunction due to clogged tanks, pipes and fittings. Though these products are inexpensive to install, the damage and interruption of the well line integrity may cause more expense to the homeowner.
3. Snifter valves—Sometimes installed on the well line on submersible well pumps, they allow air to replace the water on a drop pipe attached to the well pump.
4. Air pumps—These are popular with many water treatment specialists because they’re moderately priced and don’t contribute to any of the well line problems with venturis or snifter valves. The dealer may locate the air injection point in a variety of places when air pumps are applied. One of the flexible features is that air pumps may be installed after the water has gone through a water softener, other pre-filtration device, or on an untreated line that’s used for irrigation, groundwater heat pump or other purposes.

Air pumps may be energized by electrically connecting to a pressure switch, flow switch, level switch or other controller. Various venting devices are used to remove excess air from the aeration tank (also known as a vent tank). These products include float vents and solenoid valves; either may be used in conjunction with the air pump or venturi. A limitation to air pumps is that they don’t produce enough aeration to remove all gaseous contaminants such as radon, methane and CO2 in a pressure vessel.

Advantages of aeration
When there’s an effective choice between using maintenance chemicals (such as chlorine, potassium permanganate, ozone and salt) or using aeration, the prospective customer may choose the more natural way—aeration. Eliminating chemical costs to maintain the system is an appealing point. Aeration equipment may be more economically feasible to purchase and maintain than chemical systems. Aeration systems are ecologically safe and may require little or no homeowner maintenance. No maintenance chemicals are discharged to waste during the regeneration process in a typical aeration/filtration system. Routine filter maintenance is recommended for optimal long-term operation of an aeration system. Referrals flow easily when customers are left with a good taste from a natural water treatment system.

Conclusion
When a water treatment dealer hasn’t used aeration previously, or when considering upgrading a venturi aeration system, it’s best to try a system first and observe its performance over a reasonable period of time. Aeration may be rewarding to a dealer who has a problem water market. Advances in aeration technology in recent years permit dealers who carefully apply that information properly to surge ahead of their competitors in sales and profits.

About the author
Robert Rhoades is president of Air Pump Water Solutions Inc., of Annapolis Junction, Md. He has been in the water treatment business since 1967. The company was formed in 1993 to market the Air Pump™, which is used in the water treatment and wastewater treatment industries. Rhoades can be reached at (301) 604-2880, (410) 792-0762 (fax) or email: sales@air-pump.com