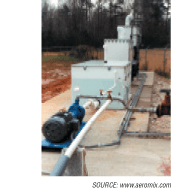 Summary: One of the oldest water treatment technologies remains one of the most cost-effective methods of removing volatile organic compounds (VOCs) and other contaminants including MTBE and radon.

For years, Norway Water District in western Maine used potassium hydroxide to reduce the naturally high levels of carbon dioxide present in the district’s drinking water, virtually all of which is pumped from local groundwater sources.

Lowering carbon dioxide was important to reduce potential corrosion in the copper and lead pipes that are typically used by the district’s customers, said Ryan Lippincott, the district’s superintendent.

Still, while potassium hydroxide was effective in reducing carbon dioxide levels, Lippincott found it to be an expensive water treatment option for a relatively small water district that pumps 700 gallons per minute to 800 connections, and serves about 3,000-4,000 inhabitants. Lippincott also worried about the hazards of working with the chemical, which the district purchased in concentrated solutions. “The safety factor is tremendous,” he said. “We had to wear goggles, face shields, aprons and rubber gloves.”

Seeking an environmentally friendly solution, Lippincott discovered that he could eliminate the use of potassium

While the district’s electricity costs have climbed as a result of the increased pumping needed to run the air stripping system, costs are far less than the cost of purchasing potassium hydroxide, Lippincott said. As a result, the district has been able to reduce its carbon dioxide treatment costs by at least one-third. The air stripping system also removes radon, he added, which is an important bonus considering the anticipated strengthening of U.S. Environmental Protection Agency (USEPA) guidelines for radon during the next few years.

“It improved our overall system,” Lippincott said. “Our water quality has improved and we have less taste and odor problems.” While air stripping is one of the oldest water treatment technologies, it remains one of the most useful methods of cleaning drinking water, particularly from groundwater sources.

Many water districts across the country are finding that air stripping isn’t only a useful tool to reduce carbon dioxide and radon, but MTBE (methyl tertiary-butyl ether), TCE (trichloroethylene), benzene and other contaminants are becoming increasingly problematic due to increasingly stringent environmental regulations. 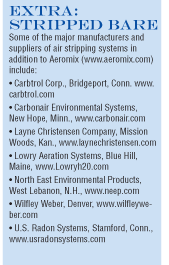 While air stripping has a number of applications, Rodriguez said it has been found to be particularly effective at removing MTBE when found in water in relatively low concentrations of less than 1 mg/L. He cautioned, however, that MTBE is generally more difficult and costly to remove than other compounds, and that carbon filters are often needed to address spikes in MTBE concentrations, which can occur through sustained groundwater pumping.

Five categories
Rodriguez, who has studied the effectiveness of air stripping systems in removing MTBE and other contaminants, said these systems generally fall into five categories. They include:

Points to ponder
Consulting engineers and water treatment manufacturers recommend that, before deciding what kind of air stripping system to install, the following steps be considered:

“Ultimately,” said Ken Lanouette, president of Carbtrol Corp., “you have to consider the overall efficiency and maintenance costs.” 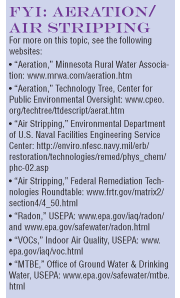 Conclusion
As with most things, the final determining factor in which type of air stripping system to employ is money. Yet, efficacy of the technology or method is just as important in determining whether the route you choose is cost effective. In addition, it’s wise to carry out appropriate pilot studies to directly measure the performance of the proposed aeration process. In many cases, manufacturers have mobile test rigs that can be used to gain direct practical experience and performance data.

About the author
Jeff Crider, formerly public relations manager for USFilter Corp., is a Temecula, Calif.-based writer specializing in water issues. He can be reached at (909) 699-7857 or email: jeffreycrider@aol.com