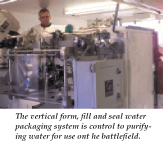 Inside the Army: A Wet Job in Dry Weather
More than 5,000 soldiers deployed by air, rail and ground began training on Sept. 24 for Exercise Victory Strike III on the Drawsko Pomorskie and Wedrzyn Training Areas near Szczecin, Poland.

The exercise, which ended Oct. 18, was designed to sharpen the deep operations skills of the aviation elements of the U.S. Army’s only forward-deployed corps. It included V Corps’ newly-acquired Apache Longbow helicopters as well as a new water packaging system to keep troops properly hydrated.

Highlights of this year’s exercise included an airborne operation to practice capturing an enemy airfield, combat search and rescue missions, use of the corps’ long-range surveillance detachment and introduction of the Tactical Airfield Integration System to coordinate combat flights. Victory Strike III also tested the corps’ ability to rapidly deploy and sustain its command post and support elements in a combat scenario. 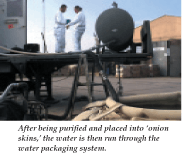 Summary: In Europe, the U.S. Army is trying out a new covert product—a water packaging system that will allow the troops to better utilize their water supply as well as maintain the well-being of soldiers during training exercises. The first reviews from the ground are positive.

In the U.S. Army, the first days of basic training include the commands to “Drink water,” “Empty your canteen” and “Stay hydrated.” Hydration is a key to a soldier’s success on the battlefield, and one company of soldiers set out to ensure, with the help of a new water packaging system (WPS), that there would be plenty of water available to drink during a corps exercise last fall in Poland.

“Fresh water, salt water…as long as we have some type of water source, we can bring it here, send it through the purification system, put it through this water packaging system, package it and move it out to soldiers,” explained Spc. Eric Sorenson, 240th Quartermaster Company of V Corps’ 3rd Corps Support Command (COSCOM), which is based in Wiesbaden, Germany.

All across Europe
The WPS, currently the only system of its kind in operation in the U.S. Army in Europe, is being used in conjunction with a reverse osmosis water purification unit (ROWPU) to put out clean drinking water for troops in the Polish exercise, Victory Strike III, at a rate of up to 25, 1-liter pouches per minute.
First, the water is sent through the ROWPU, which can purify water from lakes, streams or seawater at up to 7,500 gallons per hour (gph). It then goes into the WPS, a vertical form, fill and seal machine that packages the water into thick, clear plastic bags. The bags of water are then boxed, put on pallets and sent to ration break point areas where they are distributed—along with food—to more than 5,000 soldiers participating in Victory Strike III (see Inside the Army).

Though the Army’s Forces Command (FORSCOM) has used this type of system since 1997, this is the first time these soldiers have seen it.

“We just got this new system from the Department of the Army to use and test,” said Major Richardo Garland, 71st Corps Support Battalion support operations officer. “This will become our system, so right now our soldiers are training on all the equipment. After this exercise, we will be self-sufficient and able to produce and supply water wherever we’re asked to.”

Attention to the details
To ensure the time spent training on the system is beneficial, FORSCOM representatives are on hand to give instruction and familiarize the soldiers with the equipment and procedures, according to Dave Duncan, a FORSCOM quality assurance representative.

“Usually they’ll [the soldiers] just support us, but now they’re taking over this machine and will run the whole system on their own after this exercise,” he said. “Right now, we’re out here basically as facilitators and instructors.”

While training on the system, soldiers are using this experience to see how effectively this system can support their mission. They’re already finding a few of the benefits of having a WPS in their arsenal.

“One thing that I can already see is that if we had to go and establish a water point at a certain location, using this system will make the water that we have on the ground last even longer, and it will free up a lot of other assets that we would normally be using to move water around to various places,” said Master Sgt. Romeo Smith, 71st Corps Support Battalion senior petroleum and water sergeant.

Greater efficiency
By being more efficient than the former mode of dispensing water into large transportable tanks on wheels, less expensive, and by allowing more water to be set aside as a reserve, the WPS will greatly improve the effectiveness of the unit.

“Before, units would bring their Water Buffaloes to be filled up, or we would have to send our vehicles with water out to them and set up water points, which might last for two or three days,” Smith said. “This system will enable us to maintain a reserve of water and still allow us to provide water to the troops on the battlefield, which will allow us to sustain them even longer.”

Conclusion
Regardless of the terrain, reverse osmosis water purification units (ROWPU) are central to keeping military forces properly hydrated during military exercises or action in the field. The new packaging systems—”water-baggers”—allow for easier transport of vital water to and by individual troops on foot anywhere.

Reverse osmosis systems for military use vary in size based on needs of the particular unit. The following are specifications for one unit used by the U.S. Marine Corps:

Primary function: The ROWPU is a proven system capable of treating water from any available source.
Mission: The purification process will remove NBC (nuclear, biological and chemical) from water, produce potable water from brackish shallow and deep well sources, and satisfactorily treat water from fresh, brackish, or seawater sources.
Features: The ROWPU is transported in an
8-foot × 8-foot × 10-foot rigid frame.
Production Rate: Sea water source: 600 GPH. Fresh water source: 1,800 GPH
Weight: 7,300 pounds
Length: 120 inches
Width: 96 inches
Height: 96 inches
Power source: 30 KW generator
Background: This system is used by all of the U.S. military services and has performed well for the Marine Corps. During Operations Desert Shield/Storm, the ROWPUs were used extensively and proved themselves to be reliable and capable. The ROWPU provides a truly expeditionary capability, allowing Marine units to acquire water from a multitude of sources.