Recently, I took my 1-year-old child to the doctor with an obvious microbial affliction. As a microbiologist, I tend to fear that every illness might be the rare but nonetheless deadly E. coli infection. “Just a virus,” my doctor said. “Which virus?” I wanted to know. “Just a virus,” he repeated. Being one who has devoted significant amounts of time memorizing the characteristics of every virus known to infect man, this wasn’t an acceptable answer from a fellow expert. Viruses tend to be lumped into a single category of unknown and incurable agents with barely treatable effects. While this is justifiable to an extent, many viruses have distinct characteristics of survival and resistance to treatment practices that warrant closer attention, especially in terms of learning how to avoid them.

Consider caliciviruses, which infect both humans and animals. The human caliciviruses are divided into two genera—Noroviruses and Sapporo viruses. Noroviruses are small—27-30 nanometers (nm) or 0.027-0.03 microns—single-stranded, nucleic acid (RNA) viruses often associated with waterborne infections. Overall, caliciviruses are believed to be the primary cause of viral gastroenteritis in the world1,2, and are common causes of food and waterborne diseases. Many people, including physicians, haven’t even heard of these specific agents due in part to the fact methods studying caliciviruses have only recently been developed.

Also problematic is that waterborne caliciviruses are known by many names including noroviruses, Norwalk viruses, Norwalk-like viruses, SRSVs (small round structured viruses), among others. Distinct virus strains are named after the region from which they were initially isolated following an outbreak of disease. Norwalk virus is the prototype agent of the waterborne noroviruses and was first identified in 1972 after an outbreak of gastrointestinal illness in Norwalk, Ohio, occurring throughout 1968.

Unique characteristics
Caliciviruses don’t behave like many traditional human enteric viruses. They aren’t yet culturable in the laboratory despite nearly three decades of attempts to grow the viruses, are relatively resistant to chlorine disinfectants, and may be transmissible from animals to humans. Typically, viruses are very host-specific where human viruses infect humans and animal viruses infect animals. Caliciviruses are one group that appears to cross the species barrier from pigs and cattle to humans, but little is known about this possibility and whether or not there are associative health effects in humans.3

Following exposure to noroviruses, symptoms usually manifest within 24-48 hours, and subside after 24-72 hours. These viruses generally cause self-limited gastroenteritis marked by symptoms of abdominal cramping, malaise and other flu-like symptoms including a low-grade fever, vomiting, headache and nausea. Although severe cases (i.e., those requiring hospitalization) are rare, a norovirus infection can be quite debilitating. Because of the rapid, acute onset and short duration of illness associated with norovirus infections, it’s unlikely that many infected individuals seek medical treatment. For those that do, definitive diagnostic tests are rarely ordered by physicians, thus the majority of norovirus infections are probably not reported. Typically, only large outbreaks are identified where clusters of cases are more obviously related to a common source contaminant. Even after the abatement of the illness, infected persons may continue to shed the virus (i.e., remain infectious to others) for up to a week.

A primary etiological agent
No etiological agent is ever identified in approximately half of all documented waterborne disease outbreaks in the United States. These unknown agents frequently exhibit an onset and symptomology of disease consistent with viral agents. Many researchers theorize that the limiting factor in identifying these unknown etiological agents is the lack of detection methods for human viruses.

Noroviruses are important etiological agents of acute epidemic gastroenteritis, primarily infecting adults and school-aged children but rarely infants and young children. Approximately one-third of all viral gastroenteritis in this country in adults and children over the age of 2 are believed to be due to Norwalk virus. Immunological studies tell us that by the age of 18, more than 50 percent of persons in the United States have been exposed to Norwalk virus. Reinfection is common and there’s no lasting immunity to the pathogen. In a large study of general outbreaks in England and Wales (40,000 cases), Norwalk-related viruses were identified in 43 percent of all cases, the largest single category and greater than Salmonella and Campylobacter.4

Recognized outbreaks often infect hundreds of individuals at a time. Acute cases of calicivirus infection are currently at an all-time high, according to the Centers for Disease Control and Prevention (CDC). Whether the increase is due to the natural fluctuation in the life cycle of the virus, or some other effect is uncertain. The norovirus group is estimated to cause between 23 and 40 million cases a year in the United States, leading to 50,000 hospitalizations and 310 deaths. Researchers estimate that over $1 billion a year is spent on Norwalk virus illnesses (i.e., treatment and medical expenses, lost wages, etc.) in the United States with approximately half of this amount as a result of waterborne transmission.5

Relative to other enteric pathogens, noroviruses have a high attack rate where a large percentage of exposed persons are likely to develop disease symptoms. In fact, the attack rate of Norwalk viruses where a common source, such as drinking water, is involved is 60 percent while the spreading rate from person-to-person is 39 percent. Like other enteric viruses, noroviruses have a low infectious dose, meaning that 1-10 ingested viruses may be enough to cause disease. Spread primarily by the fecal-oral route, noroviruses may be transmitted by food, water, person-to-person, or via surface contamination. The most common foods implicated in norovirus outbreaks are shellfish—often harvested from contaminated waters and consumed raw— and foods requiring handling such as salads, which become contaminated from workers’ hands. There’s also evidence of aerosol transmission. The waterborne route is the most common and may include not only drinking but recreational water. In addition, a recent series of outbreaks on cruise ships have caused increased concern over stored water supplies.

Norovirus outbreaks are especially common in confined spaces like military camps, cruise ships, nursing homes, hospitals and schools. Recently, these viruses have made headlines around the world due to their persistence on cruise ships (see Newsreel this issue). Last year, there were 23 outbreaks of gastroenteritis on 19 cruise ships with three-quarters due to noroviruses. This is a tripling of the number of outbreaks over the previous year and more than the prior four years combined. The viruses are able to survive for days on surfaces, causing epidemics that cross over into several consecutive voyages. On one ship, the outbreak continued for four separate trips, halting only after the ship was docked for 10 days and subjected to an especially rigorous cleaning. The more intensive cleaning protocol involved sanitization of the ship from stern to bow, disinfecting objects in passengers’ cabins such as television remote controls, sanitizing furniture, replacing pillows, and steam cleaning carpets to break the cycle of infection.6 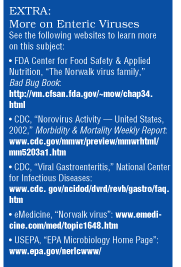 Control
Methods are available for concentrating caliciviruses from water, using positively charged cartridge filters, although no cultural methods exist for their detection. Environmental sample surveys frequently involve the use of molecular (genetic) detection approach-es, currently able to detect more than 90 percent of known noroviruses. Although costly, methods have been developed for source-typing of noroviruses during outbreaks. Source-typing involves use of genetic analysis, capable of linking strains of viruses by their RNA structures and allow tracing the source and spread of similar agents.

Public health and regulatory agencies recognize the significant impact of calicivirus infections in humans and are interested in preventing these viruses from contaminating drinking water supplies through regulatory controls. Before regulatory decisions can be made, however, significant information is needed regarding source, prevalence, fate and transport of caliciviruses in the environment. Current molecular methods, targeting viral genomes, provide a useful detection method for formation of a database of calicivirus occurrence; however, information on survival and viability is imperative for risk assessment.

To prevent Norovirus infections, basic food and water hygiene protocols must be followed. Sick individuals shouldn’t prepare or serve food and potentially contaminated surfaces should be thoroughly disinfected. The virus is susceptible to 1 percent sodium hypochlorite (approximately one part household bleach to nine parts water), the active ingredient in bleach. In terms of water treatment, noroviruses have been found to be more resistant to chlorine disinfection than other waterborne viruses such as poliovirus, rotavirus and bacteriophage indicators. Using human subjects, researchers found Norwalk virus remained infectious even after exposure to 5 milligrams per liter (mg/L) of chlorine after a 30-minute contact time. Although a vaccine is being developed by researchers at Arizona State University, the best defense for staying healthy—as is always the case—is to wash your hands frequently (and particularly after restroom breaks or diaper changing).

Conclusion
There are little data available concerning the length of time caliciviruses remain infectious in ambient waters or concerning their ability to survive for extended time periods in the aquatic environment. Thus, adequate data aren’t available for the application of risk assessment models for human caliciviruses. In the case of Norwalk virus, for example, data are lacking about the infectious dose, actual dose levels associated with gastrointestinal outbreaks, concentrations of the viruses in ambient and drinking waters, and ability of caliciviruses to survive environmental settings and drinking water treatment processes. We’ll continue to grapple with these research questions for years to come. For now, it would be nice if the next time I tell someone my child has the “stomach flu,” they would respond by saying, “It sounds like norovirus!”