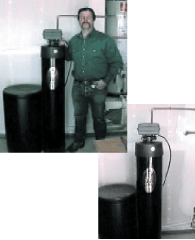 In 13 years, Gardner’s Water Service, of Stagecoach, Nev., doubled in size. That’s right, it went from a one-man operation to two men. Overhead? Gardner Davis, owner of the company, is oblivious to the term. He lives, drinks and eats his business. Literally. He works out of his home, which doubles as his workshop—bringing new meaning to making house calls. When customers call Davis, he hauls out the kitchen sink, or at least easily could.

Make no mistake, though, Davis wouldn’t have made it this far if he didn’t have the know-how and customer satisfaction to back up his work. In the beginning, he recalls, things weren’t so easy. 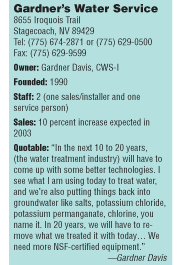 Right place, right time
“I built custom homes for 10 years before I got into water treatment,” he says. “A good friend of mine, who was a really good salesman, started selling for a distributor of Water Resources (of Phoenix) in Reno. So I got into it as a service guy/installer for them since I wanted to change trades due to carpal tunnel in my hands. I worked for them for about a year in 1989.

“The owner really didn’t know how to run the business so he went under. I started the business (a franchise at the time) with a customer service list and 500 bucks in my pocket. I took over from there and built it into what it is today.”

So, what is it today? Well, Gardner’s Water Service is an independent water treatment company with a 75/25 percent split in its customer base between residential and commercial business, respectively. Among his commercial accounts are a few mines, trailer parks and small municipalities. It wasn’t always this way for the 38-year-old Davis. In the business’ infancy, his whole operation revolved entirely around the residential sector. Plus, his workload was much different.

“I knew I was going to have to work harder than I did at a 40-hour-a-week job. I worked 18 hours a day (for the first two years), pretty much on the phones, and did anything I had to,” Davis explains. “The first year, I did some odd construction jobs just to make ends meet. Once I got my customer base up, the biggest thing I focused on for the first two years was nothing but getting the name of the equipment back to where it should have been.”

Time for the hunt
The approach seems to be working. Last year, Gardner’s Water Service registered a 10 percent increase, or $20,000, in sales over the previous year. With a healthy start in 2003, Davis sees similar growth this year. And about those side jobs and 18-hour days? They appear small in Davis’ rearview mirror. Davis reasons, “It was extremely hard but if you’re going to start a business, that’s what it takes.” He even finds time for his other passion in life—hunting. Davis and his wife, Janelle, always escape for two weeks during the hunting season between September and January. The prey includes everything from birds, duck, geese, dove and quail to bigger game such as elk and deer in Elko (300 miles away). Occasionally, the Davises will travel to Utah, New Mexico and Montana for a hunting excursion.

Gardner’s Water Service is a Water Resources distributor, and the relationship shouldn’t be underestimated. “I’ve worked on everybody’s equipment—Culligan, Kinetico, Rainsoft, every one of them,” he says. “Working with Water Resources, I think it’s the best equipment on the market. And, no, I am not tied to them. I do buy a few other things here and there from other companies but, as far as their basic equipment and technical support through Mark Nolan and Jerry Bishop there, the company is great and builds a piece of equipment that will last.”

Aside from Water Resources, which accounts for 85 percent of Davis’ equipment, he also works with Krudico (chlorinators and pellets) and WEDECO-Ideal Horizons UV. In case you think otherwise, he tackles all water issues and the range of technologies in his arsenal underscore this. Davis rattles them off one by one—ultraviolet (UV) lights, pellet chlorinators, liquid chlorinators, carbon filters, ozone systems, softeners, iron filters, arsenic removal systems, anion selective resin for arsenic and nitrates, cation softeners, whole house RO systems, commercial RO systems and wastewater treatment systems.

“Basically, the guys at Water Resources know me as the guy who won’t walk away from anything and will treat anything,” he says. “They’ve called me about some real bad water. Here in Stagecoach, I’ve seen iron at 28.6 parts per billion (ppb), hardness at 90 grains, TDS (total dissolved solids) in the 2,000 range, and that’s a standard house.” In addition, as a non-Water Quality Association member, Davis relies heavily on Water Resources and industry magazines for his educational literature.

Improving quality
And the way Davis describes Nevada’s water, there’s no such thing as too much information at his disposal. According to him, 90 percent of the state’s water is groundwater with very little surface water and storage water. While Nevada holds more groundwater than any other state in the union, he adds: “The quality isn’t good; it’s been affected by mining since the 1800s. The Carson River (a large source of water) has 5,000 gallons of mercury, and you can’t eat the fish or use the water.”

In a turnabout of sorts, the mining industry has provided Davis with a good source of income. Three years ago, several mines closed due to a slump in the economy. Now, with gold creeping up in value, a few other mines have opened for business. Davis says two or three mining jobs have come his way. Of course, these are major ventures and he can charge anywhere between $100,000 to $200,000. He devotes one or two weeks on-site installing equipment. So, how does he do it with only one other employee? Electrical work is done by an outside professional and, if extra help is necessary, it’s contracted out.

Many mines are 150 miles from any town and, therefore, other water treatment companies are reluctant to take on such an arduous task. The mines know this and count on Davis. He says, “The mining industry calls me and doesn’t shop around. Ninety-nine point nine percent of my business is all word-of-mouth. I don’t cold call people; it’s happy customers telling their friends.” He admits to having only a yellow pages listing. Davis continues, “If you don’t have a reputation of being the guy that’s going to take care of it, then you won’t last long.”

Interstate travel
With Stagecoach 60 miles southeast of Reno, Davis makes service calls to all of Nevada as well as half of California (the Sierra area, in particular). His auto mechanic must know him by first name as Davis logs 70,000 miles on his truck a year. This can also have its drawbacks as Davis attests to when he speaks of holding three city licenses, five county licenses and a state contractor’s license. He laughs, “Everybody wants their $5. Unfortunately, it’s not $5.”

Since a majority of his customers are on well water, service calls can be rather spread out. It’s this familiarity that makes him claim he’s “the only one in the state that specializes in well water.” He adds that 80 percent of Nevada’s wells have iron bacteria. “City water, to me, is boring. It’s easy to treat and it all needs the same equipment. On the other hand, every well is different,” Davis asserts. One extreme example he provides is a customer in Virginia City Highlands who, in order to treat his well, needed a chlorinator, a multi-media filter, two iron filters, a carbon filter and a softener. Davis concludes, “The water is good but the customer has an oil refinery in his garage.”

In addition to iron bacteria, Davis encounters excessive fluoride (9 to 10 ppb), arsenic (4 ppb at its high), boron (30 to 40 ppb), radon, uranium, mercury and excessive nitrates. “Just about anything that can show up on a water test I have run into,” Davis says. With boron, he treats it with reverse osmosis (RO) so homeowners can grow trees, plants and a lawn.

Arsenic is handled with a small or whole house RO, or a softener with anion resin system. Davis sees a boon in business since there’s ample evidence of widespread arsenic in the state: “With this new arsenic standard (0.01 ppb in 2006), it’s going to get bad everywhere here. There isn’t any water around here that doesn’t have arsenic in it. There will be hundreds of billions of dollars spent across the United States on water treatment.”

Emphasizing NSF
For the time being, Davis envisions a time when he can schedule 10 service calls a day, which will only fatten his bottom line. After all, he claims, “My sales closure rate is 98 percent.” Before he thinks too big, however, Davis realizes there are still obstacles awaiting him out in the field. As a purveyor of the municipal/commercial markets, he knows local health departments can be difficult groups when attempting to conduct commerce. “They get a book and read from it and say, ‘This is how it’s supposed to work.’ None of them know how the equipment works,” he says. Davis has learned to work around this, though. He continues, “When you do a job and you walk into the health department, they don’t care if it’s WQA-approved. They want NSF, period.”

Davis gives a “lifetime guarantee” to his customers by promising that the equipment “will do what I promised, or any additional equipment is free.” And how is his record? “In the years I’ve been in business, I’ve eaten three pieces of equipment,” he contends.

As far as competition, Davis has a simple plan: “I don’t have a lot of competition because I undersell everybody. The going rate for a softener and RO around Nevada goes for between $3,000 and $5,000; I sell it for $2,300. Everybody should be able to afford water treatment equipment, and not just the rich.” Customer awareness, he adds, will continue to carry the day. Since the federal government began regulating bottled water in the mid-90s, Davis has noticed that awareness has increased.

Conclusion
Into his second decade of working in the industry, Davis sees the growth of Gardner’s Water Service emulating the population boom of Nevada itself. He has his son in Kuwait, via the military buildup over Iraq, as of this writing who’s waiting to come back home and enter the business. Davis says proudly, “When I’m ready to retire, he’ll take it over. He’ll be able to live off the service.” That’s the same service base Davis built from the ground up.