Summary: As one examines the history and unfolding events surrounding arsenic toxicity and treatment, clearly the situation is dynamic. In five years of closely tracking the issue, one thing is evident—the issue of arsenic treatment isn’t going away and remains one of the hottest topics in the drinking water industry.

Over the past year there has been an unprecedented number of articles, press releases and communities scrambling to understand how to deal with the impending arsenic compliance issue for 2006. As a result, consumer awareness is at an all-time high as the general public seeks solutions. Few reliable and affordable choices have been available to the homeowner who desires to treat all incoming water at the point-of-entry (POE). A new class of iron oxide-based adsorption products offers a promising alternative for whole house treatment. Dozens of successful installations in the 5-10 gallons per minute (gpm) range have been implemented throughout the country. A few examples are presented here along with performance and cost data.

Meeting the needs
Whole house POE treatment is applicable to two basic groups of consumers—those currently connected to municipal water supply (public water system) containing arsenic, and those who obtain water from a private well source containing arsenic. The point could be made that those in the first category will eventually have their arsenic issue addressed, as these facilities must comply with the new U.S. Environmental Protection Agency (USEPA) maximum contaminant level (MCL) of 10 parts per billion (ppb) in 2006. The question is, “Will they wait?” Evidence indicates the consumer’s desire to address this potential health issue. Another cost-effective consumer option (not addressed in this article) is point-of-use (POU), which could address potable drinking and cooking needs in the home. The impacted population supplied by public community water systems with arsenic is fairly well defined in the United States, affecting over 13 million people. This isn’t surprising as public water systems comprise the majority of the existing database. In contrast, private well owners are faced with a set of somewhat different challenges including:

Essentially, these consumers are on their own to determine the safety of their drinking water and find treatment solutions. Some states such as New Jersey have implemented aggressive well-testing programs and help homeowners with identifying arsenic in their wells and assist them with treatment options. Interestingly, these various state well-testing programs are revealing that arsenic occurrence above safe levels in private wells is much more prevalent and extensive than previously known in these rural areas, simply because these wells have never been tested for this contaminant.

Even considering the lack of comprehensive and quantifiable private well data, there are hundreds of thousands of private wells with elevated levels of arsenic in the United States, with the numbers more likely in the millions. In Maine and New Hampshire, for example, it’s reported that 30-35 percent of Maine’s 300,000 private wells1 and 15 percent of New Hampshire’s 200,000 private wells,2 respectively, have arsenic levels above 10 ppb. Other states with proportionally large rural populations with documented elevated levels of arsenic include Michigan, Wisconsin, Minnesota, Washington, New Mexico and New Jersey.3

Technology options
Up until last year, three basic alternatives have been commercially available for arsenic reduction with POE—activated alumina adsorption, anion exchange and reverse osmosis (RO). The most common alternatives implemented have been 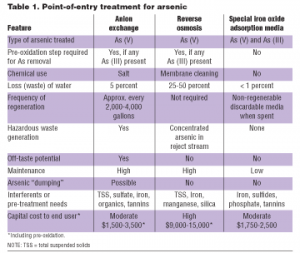 anion exchange and RO. Use has been fairly limited for several reasons—low awareness, relatively few numbers of homes actually “needing” solutions under the higher MCL of 50 ppb, expense, and lack of compelling data on the toxicity of arsenic. The new arsenic rule, and determinations leading to it, changed that. Adsorption using new high-capacity iron oxide-based media is rapidly filling the need generated by resulting consumer awareness. Each option has advantages and disadvantages. Table 1 summarizes some of the pros and cons of these options.

One of the new emerging POE technologies available commercially utilizes a granular ferric oxide-based adsorbent product that has been successfully used in large-scale drinking water applications since 1999. The media is highly porous, stable and dry and has a very high surface area. Given tight bonding between the arsenic and media, the product is discardable (as non-hazardous waste) when spent and requires no chemicals or regeneration. An example of one such product is being utilized throughout the United States in small 5-10 gpm residential POE systems for arsenic reduction. Both common forms of arsenic, As (III) and As (V), are removed from water via a combination of adsorption, occlusion (adhesion) or other oxidative/ionic reaction with ferric oxide ions. This is a unique feature since many conventional processes poorly adsorb As (III) and require pre-oxidation before effective arsenic reduction is achieved. Above pH 7, the primary mechanism is adsorption of both forms of arsenic to the surface, hydroxyl groups of ferric oxide, or hydroxide as indicated here:

For POE applications, the iron oxide mineral is typically utilized in single or multiple fixed-based adsorption vessels containing the media in parallel or series and operating in a downflow configuration. Arsenic adsorption occurs as the water passes through the media bed. If a water softener is installed, the placement of the adsorption module is often installed post-softening, offering the benefits of pre-treatment for iron and hardness reduction. Life of the media is 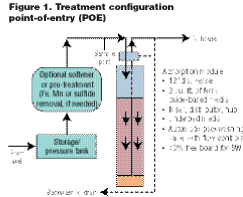 dependent primarily on water quality, pH and arsenic levels, but life cycle for a typical home with 30 ppb of arsenic and neutral pH may be two to four years before media replacement is required. Backwashing is performed twice a month typically to “fluff” the bed to prevent channeling. No detectable arsenic is

discharged to the drain during the periodic backwash events. Figure 1 shows a typical equipment arrangement for whole house treatment. Figure 2 shows a recently installed two-stage POE adsorption system in New Jersey. In this configuration, the first vessel is used as a “roughing” column, while the second is used for polishing.

Field validation, case studies
Over the past year, New Jersey implemented a testing program evaluating various POE technologies for arsenic reduction. The pilot testing program included anion exchange and adsorptive media options. Ferric oxide media was evaluated side-by-side with anion exchange in field tests with 1 cubic foot of media at a 3-gpm flow rate. The initial testing began with a field test site (well) with predominantly As (V) at an average of 50 ppb 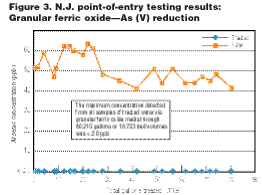 influent concentration (see Figure 3). Results show over 99 percent reduction reported out to over 80,000 gallons with the test still continuing. Also, a second test was initiated for a well known to be speciated with 90 percent As (III). A 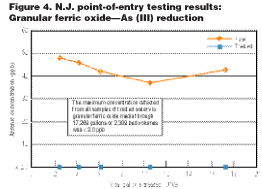 treatment system similar to the first site was installed with no pre-oxidation. Figure 4 shows results after several months of operation. Both sites are still operating, reducing incoming arsenic to below 2-ppb detection level.

Steve Spayd, New Jersey Geological Survey project manager for this effort, states: “A whole house granular ferric adsorption system is the preferred treatment technology because it removes both arsenic species, it removes arsenic from all water in the home, the arsenic is not returned to the environment via regeneration, and it is easy to operate and maintain.”4

Dozens of 5-10 gpm systems with the iron oxide media have been successfully deployed throughout the United States, treating a wide range of water quality and arsenic concentrations. The typical arrangement is a two-cubic foot system with operating parameters as identified in Table 2. 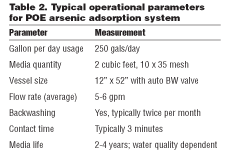 Systems can be configured with single or dual tanks and automatic backwashing valves depending on site-specific requirements. Table 3 highlights some private well 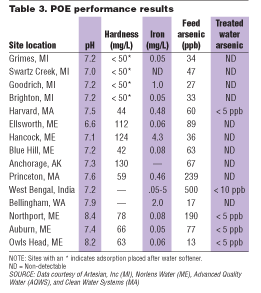 installations in Michigan, Maine, Alaska, Washington and India as well. One trend observed with private wells is the variation and level of arsenic, typically much higher than national averages for municipally distributed public water systems. Not only are total arsenic levels typically higher, but they tend to fluctuate seasonally and have higher incidence of As (III). This is critical since water treatment dealers and practitioners need to understand As (III)/(V) issues to properly prescribe any solution for POE. Like any technology, the water profile plays an important role in proper selection and overall performance. Primary predictors of performance include arsenic concentration, pH and contact time. Secondary factors include presence of competing (mostly negatively charged) ions or interferents such as high silica, phosphates or high iron, which can prematurely foul the media if not properly pre-treated.

Monitoring performance
Another key component to successful and responsible POE treatment is for providers/installers to conduct an ongoing monitoring program. The treated effluent should be sampled and monitored at appropriate intervals—every three to six months depending on the arsenic concentration and usage—to verify performance and determine media exhaustion (breakthrough) for replacement. Unlike conventional softeners or units for improving taste/odor, which address aesthetic issues, arsenic is a health-related issue and, as such, conveys a higher level of responsibility and accountability to the consumer. A number of options have been implemented from utilizing rapid low-detection test kits to obtaining laboratory samples or combinations of both. Regardless of the approach, follow-up to ensure successful long-term performance isn’t only wise, but will pay dividends by building long-term trust with the customer.

Water industry opportunities
Consumer demand for household arsenic solutions is on the rise for three reasons—again, an increase of awareness from publicity, legitimate public health concerns, and availability of more reliable, simple and affordable arsenic solutions, particularly for those served by private wells. One could rationally debate the justification of “need” for whole house treatment since arsenic exposure is primarily through direct ingestion. Concerning adsorption through the skin, biomonitoring studies—such as the one being conducted in New Jersey—will shed additional light on this debated topic in the coming months.5

Conclusion
What is clear at this time is consumers want choices and are seeking informed water treatment dealers and professionals who can provide solutions. Both in-home POU and POE are certainly viable options for arsenic. Where whole house treatment is desired, ferric oxide adsorbent technology is one of the technologies quickly emerging to fill this void.

Tom Demaso, a Maine dealer who has utilized this technology at over 25 sites, stated, “For arsenic removal, this new iron oxide adsorption technology is what the water treatment dealer has been waiting for. It does not alter the pH or add chemicals. It is virtually maintenance free for the homeowner. The long life of the product allows the dealer to offer compelling cost benefit compared to other technologies.”

About the author
Greg Gilles is vice president for AdEdge Technologies in Norcross, Georgia. AdEdge specializes in development and supply of innovative technologies, adsorbents and integrated systems for removal of contaminants from aqueous and process streams. This includes utilizing the AD-33 iron oxide technology discussed here for arsenic reduction in POE, POU, and small community and non-community drinking water system applications. He can be reached at (678) 221-2034 or email: ggilles@adedgetech.com