Taking Aim at the Next Acquisition Target

Over the past three years, the U.S. stock market has experienced the worst decline in 50 years. At every turn, people are grousing about fortunes lost, retirement plans dashed, and futures in question. What’s especially odd, however, is that investments in the water industry—in spite of investor apathy—have continued to enjoy success and growth.

As I think about the relative obscurity of water as a popular investing area, I’m drawn to a parallel in today’s blockbuster movie, Chicago, starring Catherine Zeta-Jones and Renee Zellweger. In the movie, one of my favorite songs is “Mr. Cellophane,” a character with whom I can truly relate. Amos Hart, played in the movie by John C. Reilly, struggles with the feeling he is invisible to the world around him. He sings about his feelings of transparency. Let me share with you a few of the poignant lyrics of this extraordinary song:

A human being’s made of more than air
With all that bulk you’re bound to see him there
Unless that human being next to you
Is unimpressive, undistinguished you-know-who

It should have been my name, Mr. Cellophane
‘Cause you can look right through me, walk right by me
And never know I’m there
Never even know—I’m there.

As a longtime champion of investing in the water industry, I too feel invisible. Despite the enviable investment successes the water industry has achieved over the past three years and more, few investors have taken notice. (See Table 1). Thus, I can relate to the loneliness described by Mr. Cellophane. As the investment community talks of biotechnology, pharmaceuticals, semiconductors and other areas, it ignores the fact that all of them are totally dependent on water. As a result, as investors pursued these seemingly more attractive industries, they ignored or neglected the water industry. This situation is made even more poignant by the largely superior returns enjoyed by many water industry companies. 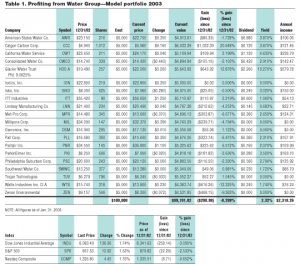 On the other hand, water hasn’t been completely ignored by everyone. In fact, there’s been an enormous amount of corporate realignment, mergers, acquisitions and an ever-growing presence of very large companies expanding into the water business. Companies like Ashland Inc., General Electric Co., ITT Industries, Pentair Inc. and numerous others are seeking, and making, acquisitions of water-related businesses. Even more dramatic, and perhaps of vastly greater importance, are the countless number of mid-size companies seeking to partner, joint venture and/or merge with similar-size businesses. Again, in spite of a lingering feeling of invisibility, this is an unusually exciting time for the water industry.

Another critical factor—the extraordinary importance of water—is routinely overlooked. Water is indeed important, for without water people die. It’s difficult to make the same argument about other precious resources. For example, consider oil. Were we to be without oil we would certainly be inconvenienced, but our lives likely wouldn’t be threatened. Without electricity our lives would be vastly less comfortable, but we’d go on. If we were deprived of water, however, in just a matter of days we would face death. Why then do we hold water in such low regard? The answer is simplicity itself. Water, except in rare circumstances, is incredibly inexpensive. It costs less than any of the products we consume that, of course, basically have water as their principal component for making them. In other words, without water we wouldn’t have such things as food, soft drinks, semiconductors, automobiles and… the list is endless.

As this article went to press, the acquisition of Osmonics Inc. by General Electric Co. is coming to conclusion. Just a couple of years ago, no one would have believed Osmonics would be willing to be acquired. This, of course, is true of a great many other water industry companies. Many believe the fierce independence of the water industry’s pioneers and entrepreneurs won’t yield to these changes. Yet, indeed, dramatic changes are under way in the burgeoning water industry, with much more to come. So, one might ask, which company is likely to be the next to be acquired by one of these acquisitive behemoths? Very large companies, like ITT Industries, have stated publicly that desalination is an area in which they intend to grow. Will Ionics Inc., the world’s leading company in desalination, remain independent? Other companies like Calgon Carbon Corp., the world’s largest supplier of activated carbon and whose products and systems make up an integral part of water treatment, is also likely to be viewed as attractive or, more important, essential. Imagine a water treatment system without activated carbon as part of the process. There are very few water treatment systems in use today that don’t have activated carbon. Then, there are the somewhat smaller companies like Isko Inc., Trojan Technologies, Zenon Environmental and countless others that are likely to be attractive to the larger, well-capitalized and more predatory players.

Conclusion
The ancient Chinese saying, or curse, “May you live in interesting times,” is a particularly appropriate characterization of what those engaged in the business of water are experiencing today. We are indeed living in an extraordinarily interesting time. There appears to be vastly more opportunities in the water industry today than ever before. Sales of bottled water are booming with water now the fastest growing segment of the beverage industry. Homeowners are purchasing water treatment devices, point-of-use/point-of-entry (POU/POE) in ever-larger record amounts. These devices are becoming viewed as appliances in homes and, as such, are likely to be found in all homes in a matter of a few years. Nations are arguing over water supplies like never before, even threatening war over the allocation of scarce water supplies. California is facing dramatic reductions in the amount of water it receives from the Colorado River. Nations and communities around the world are building, or contemplating building desalination plants, once only presumed to be for the oil-rich Middle East. So again, I ask, with all that’s going on in the water industry, and with so many companies seeking acquisitions, who is likely to be the next acquisition target? These times we live in are, indeed, very interesting!

About the author
Neil Berlant is vice president and managing director of the Water Group at The Seidler Companies Inc., of Los Angeles. Prior to that, he was with Wells Fargo Investments, First Security Van Kasper and UBS PaineWebber. Since 1986, Berlant has concentrated exclusively on business and investment opportunities in the water industry. He has been interviewed on a number of occasions by the Wall Street Transcript. He can be reached at (800) 840-1090 x 625, (213) 955-4990 (fax) or email: neilwater@seidlercos.com.