Carbon: Why Some Products Don’t Measure Up

Summary: As any water treatment dealer worth his salt can tell you—not all carbons are alike. Materials used to make each carbon say a lot about the product. A case study in a California town illustrates the point and offers tips for those looking to distinguish among the many types of carbon on the market.

The city of Ripon, Calif., didn’t make a point of selecting high-performance carbon for its drinking water treatment plant—it just happened to be the type of media that came with the new system. Naturally, they were pleased when, after years of use, the granular activated carbon (GAC) was still going strong.

“We changed out after four years just because one of the inside nozzles had broken off and fouled the whole system. The carbon itself was still in good shape,” recalls Matt Machado, civil engineer for the city of Ripon.

When Ripon engineers went looking for a replacement carbon, price was their No. 1 criteria. “We shopped around for the least expensive carbon, and that’s what we bought,” says Machado. Unlike their first batch of high performance GAC, the product they purchased was a direct-activated carbon produced at an offshore processing facility. Direct-activated carbons may begin with a lesser quality source and skip a few steps in the activation process to make it less expensive. Convinced they were saving money, the city also purchased the carbon for a new filtration system at another well site. 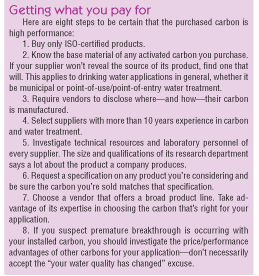 “This was a big mistake,” recalls Machado. “The new well had more chemical contaminants than the original site. After just 18 months, the offshore carbon was shot. When we compared that with the high performance carbon that lasted four years plus, we knew we needed to do some research.” That’s when the city realized all carbons weren’t the same.

Quality in, quality out
The performance of any activated carbon is directly related to its base material. Bituminous coal, anthracite, peat, wood and coconut each affect a carbon’s inherent pore structure and that directly influences its properties and performance.

To intelligently compare products, buyers need to know the source and base of any activated carbon under consideration. Choosing an application-appropriate starting material is crucial to the overall value of a product. It’s the fundamental reason why some activated carbons outperform or prove more cost-effective than others in specific applications.

Carbon suppliers should always disclose the starting base of their products because of this important relationship between raw materials and the process application.

Step by step
How a carbon is manufactured also contributes to its performance. High-performance carbons are manufactured through the following process:

A number of offshore carbons are often produced through a cost-cutting manufacturing process called “direct activation.” It begins with an inexpensive raw material and proceeds directly to crushing, sizing, baking and activation. To save production costs, the pulverizing, binding and reagglomerating steps are eliminated. While direct activation results in a lower price-per-pound carbon, it may compromise long-term product performance in many applications. 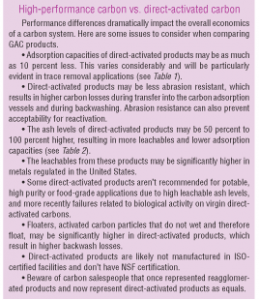 Pore structure
How well a carbon performs is directly related to its internal pore structure. The internal pathways of a carbon granule can be compared to the infrastructure of roads in the United States. There are superhighways (macropores), highways (meso-pores), regular roads and dirt roads (micropores). The larger pore structures (super highways and highways) provide faster access to where the organic removal occurs. The tighter pore structure (regular roads and dirt roads) is where the majority of the organic molecules are removed through adsorption. By eliminating the steps of pulverizing, binding and reagglom-erating, some offshore carbons exhibit fewer superhighways and highways that allow organics to travel the dirt roads, where adsorption takes place. In many demanding applications, lack of additional carbon pore infrastructure equates to reduced performance and shorter bed life.

Differences between high-performance and certain offshore products—direct-activated carbons—affect different applications to varying degrees. These offshore products initially can be less expensive on a dollar-per-pound basis; however, by removing fewer organic contaminants, they may require more frequent change-outs. The adsorption capacities of many of these carbons are significantly lower. Typically, they’re less resistant to abrasion, which results in higher transfer losses (backwash) and fines. Some have approximately 6.2 percent fines, compared to 0.2 percent for high-performance carbon. In addition, direct-activated carbons can have higher ash content, resulting in more leachables and lower adsorption capacities. They have approximately 14 percent ash, compared to 5-7 percent for high-performance carbon. Based on fines (lost in backwash) and ash, direct-activated products offer 6 percent + 7 percent = 13 percent more unusable product when compared to reagglomerated carbon products.

Whether choosing direct-activated or high-performance activated products, buyers should be aware that any activated carbon not manufactured in ISO-certified facilities offers no guarantee of initial ingredients, materials added or quality control that ensures consistency.

Lessons learned
Although many buyers remain unaware of the source of their products, Ripon engineers knew they were purchasing a cheaper carbon. “At the time, we assumed carbon is carbon. It isn’t. We’ve learned quite a bit since then,” says Machado. 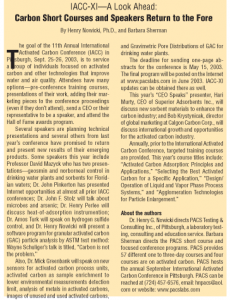 After more research and shopping, the city decided to replace spent direct-activated GAC with high-performance, bituminous, coal-based carbon. Ripon was pleased to discover the offshore price advantage of four years ago was gone. Now, both carbons cost the same.

“That made it an easy decision for us. The product was better, and the price was the same. The choice was a no-brainer,” Machado said. “If the cost had been considerably different, it would still be well worth weighing the purchase price against the expense of changing out the carbon sooner.”

Conclusion
The city of Ripon has been using this batch of high performance GAC for more than 18 months to treat for cis-1,2-DCE, TCE and DBCP. “The results have been favorable, and there’s quite a bit of activity,” notes Machado. “Still, we’re expecting twice the life from the high 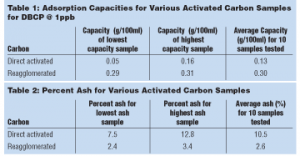 performance product that we saw from the offshore carbon. So far, we have every reason to believe we’ll get it.”