By Dick Chmielewski and Peter Meyers

Summary: Recently, a handful of portable exchange deionization (PEDI) operators in California were cited for excessive discharges of copper. How and why could this happen when the general use of the portable exchange tanks was treatment of potable water, not copper-containing wastewaters? Here’s an explanation and some suggestions.

Copper is generally only found in water which is in contact with copper-bearing minerals. Water, supplied by a municipal water system, will generally have very low, even non-detectable levels of copper. Copper discharge limits vary from location to location, but generally run from 1-3 parts per million (ppm)—although they can be as low as 0.05 ppm. In addition to concentration limits, mass limits (pounds per day discharged) may be imposed that can result in violations and citations. How can PEDI or portable exchange tank operators exceed copper discharge in these circumstances?

Have you exceeded your limit?
Copper—while an essential nutrient in nuts, beans and chocolate—can, in high concentrations, cause intestinal distress. It can also cause anemia, kidney and liver damage. The U.S. Environmental Protection Agency (USEPA) has established the federal standard or maximum contaminant level (MCL) for copper as 1.3 ppm, which is also the action level. Copper is also detrimental to aquatic life; and, when sewage treatment plants discharge to sensitive marine environments, strict limits are often imposed.

While copper concentrations are generally low in the treated municipal water, the distribution system can be a significant source of copper due to its ubiquitous status as a preferred piping material. Copper is also present in many valves and fittings, as it’s a major ingredient in brass and bronze.

Many municipal water utilities are just beginning to recognize that control of copper in their distribution systems is complex. Once the water is at the customer’s site, components in the piping and valves within the building can contribute copper to the water as well. Utilities are cognizant of these potential sources of copper as well as lead (commonly used in the past in solder compounds used in fabrication of copper piping systems) and are required to enact corrosion control strategies to minimize copper and lead concentrations.

Contributing factor
Finally, use of chloramines applied to water as a disinfectant may be a contributing factor. Chloramines are formed by combining chlorine and ammonia. It’s used—particularly in warmer months—by municipal water systems to minimize the potential to produce disinfection by-products, some of which are known or suspected carcinogens. Ammonia, however, is known to be aggressively corrosive to copper. When chloramine breaks down, ammonia is released, increasing the rate of copper corrosion.

Copper, when present in water, is typically a divalent cation. Typical strong acid cation (SAC) resins used in the PEDI industry, either in DI tanks or softeners, have a selectivity for copper between that of sodium and potassium as shown 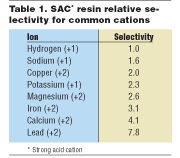 in Table 1. As such, copper will be well removed by cation resin in the service cycle and, because of selectivity reversal, it will be easily removed from the resin during the regeneration process.

Copper is also very interesting because it forms complexes with many different substances. In particular, copper complexes with carbonate and bicarbonate, and with chloride and ammonia. At a high pH, copper also forms a hydroxide complex.

Copper concentrations
One California water utility, Alameda County Water District, has published copper concentrations both at the treatment plant (non-detectable) and “at-the-tap” in customer homes (see www.acwd.org). While there was no detectable copper at the treatment plant, testing done in consumer homes showed significant measurable copper. California has established a Public Health Goal (PHG) concentration of 0.17 ppm for copper. The testing done by this utility in 1999 and 2000 showed that the 90th percentile values (highest 10 percent of samples) contained copper at level of 0.8 ppm, significantly above the PHG and noticeable above the levels measured at the water treatment plants operated by the utility.

While this is just one utility, it’s believed similar situations occur in other water systems. This particular system is supplied with water from the State Water Project as well as local groundwater that’s generally considered hard with above neutral pH levels. Clearly, copper can enter water supplies when little or no copper is present in the water when it leaves the water treatment plant.

Whenever elevated copper levels are found in the distribution system, the water utility should be advised so that appropriate corrosion control techniques can be implemented. In these cases the total amount of copper reaching the wastewater treatment plant is not increased by the use of softeners or PEDI operation.

Regeneration process
Copper, when present in solution as a possible corrosion product, is a divalent cation. As such, it’s well removed by the SAC resin used as a softener, in two bed systems by the PEDI operation, or by the cation in a mixed-bed system. When returned to the central regeneration facility, the cation resin from a DI is regenerated with acid, typically hydrochloric acid. Copper is removed from the resin and is present in the spent acid regeneration solution. Since the portable DI system acts as a concentrator, the copper concentrations in the spent regenerant (even after neutralization) can be many times the concentration of copper present in the water at the customer’s site. When a cation resin is used as a softener, the copper will show up in the spent brine after regeneration.

During the service cycle, a resin bed will see many hundreds or even a few thousand gallons per cubic foot of resin, depending upon the contaminant level. When regenerated, the copper present on the resin will be concentrated into 50-100 gallons of spent regenerant. The copper concentrations in the spent regenerant (either neutralized acid in the case of DI service or spent brine in the case of a softener) will have copper concentrations anywhere from a few dozen to hundreds of times that found in the service fluid, or raw water. Consequently, low levels of copper found at the customer site can result in high (even illegal) levels in the spent regenerant solutions.

One can see that copper could be a problem for the PEDI operator. Fortunately, the mass of copper present isn’t large, so one may consider specialty resins to treat the regeneration waste. One of the best available ion exchange technology for copper removal is the imino-diacetate (IDA) chelating resin. These types of resin have the property of being very selective for transition metals such as copper while being practically non-selective for hardness metals such as calcium and magnesium and completely non-selective for monovalent metals such as sodium. These chelating resins are so selective for cationic copper that concentrations of several ppm can easily be reduced to below 0.05 ppm. The amino phosphonic chelating resins could also be used, although their selectivity for copper over calcium isn’t quite as large.

The copper removal system would consist of a filtration step for the spent regenerant or brine, pH adjustment followed by one or more tanks of the chelating resin. For best performance, the chelating resin must be operated in an acid environment so the pH should be adjusted to a maximum of 5 and preferably in the range of 3-4. This means for most operators, the solution would have to be readjusted to meet discharge pH limits.

The IDA chelating resins are regenerated with strong mineral acids such as hydrochloric or sulfuric and then are neutralized with a base such as sodium hydroxide prior to use. This can be accomplished at the portable exchange dealer’s facility followed by chemical precipitation of the copper salt, or electro-winning of the copper. The spent (neutralized) regenerant from this process would contain sufficiently low copper levels that it could be discharged. An alternative to the above is to have the resins sent out to a specialist portable exchange dealer who services the metal finishing industry and routinely provides regeneration of this type of resin. Generally speaking, copper isn’t considered a hazardous metal and the copper concentrate doesn’t have to be viewed as a hazardous material. Nevertheless, all local and state laws concerning disposal must be followed.

Conclusion
With reasonable consideration and modest expense, portable exchange dealers need not be concerned for their livelihood by new tighter copper discharge limits. It’s both possible and practical to use ion exchange technology as the solution to this problem. Indeed, if the situation is occurring in your area, installations with fixed (in-house) regenerated systems may also be facing fines or citations over copper discharge limits. The well-informed and educated ion exchange professional can solve these problems and possibly create new business opportunities.

About the authors
Dick Chmielewski is West Coast technical representative for ResinTech Inc., of Cherry Hill, N.J., and has been in the water treatment industry for 20 years. A member of the WC&P Technical Review Committee, he has a bachelor’s degree in chemical engineering from the New Jersey Institute of Technology and a master’s degree in the same study from University of California-Berkeley. Chmielewski can be reached at (760) 741-1759, (760) 918-0831 (fax) or email: dcres@inetworld.net

Peter Meyers is technical manager for ResinTech Inc. He has nearly 30 years industry experience covering a wide range of applications from demineralizers, polishers and softeners to industrial process design and hardware operation. A former member of the WC&P Technical Review Committee, he attended the University of California-Santa Barbara and holds an associate’s degree from Mt. San Antonio College in Walnut, Calif. Meyers can be reached at (856) 768-9600, (856) 354-6165 (fax) or email: pmeyers@resintech.com