Summary: Arguably, the greatest potential for membrane separation technologies is in wastewater treatment and chemical processing applications, yet they’re the least publicized. Many potential users of these technologies are unaware of their applicability. This paper provides an update on membrane polymers, device configurations and system designs for such unique applications.

Wastewater and chemical processing applications are considerably more complex than water purification membrane applications. For the former, the goal is usually to squeeze as much water out of the feed streams as possible, resulting in system recoveries of more than 95 percent as compared to a maximum of 75 or 80 percent for water purification applications. Therefore, these high recoveries present potential fouling problems due to the higher resulting concentrations of rejected materials. Many wastewater streams are also one of a kind so there’s little or no history of membrane testing on the particular stream.

Fouling issues
The bane of all membrane systems’ operations is fouling. Fouling is defined as the accumulation of insoluble materials on the surface and/or into the pores of the membrane. Fouling manifests itself by the reduction of permeate flow in the absence of all other factors (reduced applied pressure, lower feed water temperature, etc.). There are three approaches to address fouling problems in any application—pretreatment tailored for the specific feed water, a membrane device configuration selected for its fouling resistance, or backwashing and/or cleaning of the membrane.

Foulants, the materials that produce fouling, can be divided into inorganic salts, organic compounds and microorganisms.

Inorganic salts are those that, by the nature of their chemistry, are insoluble or become insoluble due to the concentration process such as reverse osmosis (RO). Typical examples include silica (SiO2), calcium carbonate (CaCO3), calcium sulfate (CaSO4) and ferric hydroxide [Fe(OH)3]. Colloidal foulants are also included in this category, although many of these are complex inorganic/organic compounds. Colloids are typically identified by the fact they’re finely dispersed and never completely settle out of a solution.

Organic compounds include naturally occurring organic acids such as fulvic and humic as well as fats, oils, greases, detergents, etc. Some of these may contain inorganic components from a manufacturing operation or as a result of chemical reactions with an inorganic ion in the water such as iron or silicon.

Microorganisms are prevalent in virtually all water supplies. The categories of microorganisms found here include bacteria, viruses, protozoa, fungi and algae, among others. With regard to fouling, the most troublesome are bacteria because they’re ubiquitous, viable (growing) and form biofilms, which are complex glycocalyx matrices formed as a result of bacteria metabolic activity. These matrices adhere to virtually all surfaces, including membranes and, although they’re foulants, they also capture suspended materials from the water supply to cause further membrane fouling.

Most water purification applications present more predictable and better understood fouling potential than wastewater and chemical processing applications. The typical application is treating water from either a surface source (river, lake, ocean) or a groundwater source (i.e., well). Although some of these sources are high in fouling chemistries, they are generally well known and have been thoroughly studied. Since most wastewater and chemical processing applications are one of a kind, the fouling chemistries are generally not well known and therefore not predictable.

Membrane device configurations
Since about 1955, and the creation of the first practical RO membrane, devices (“elements” or “modules”) have evolved into many configurations. In an attempt to categorize them, the following types—spiral wound, plate-and-frame, capillary fiber and tubular—are generally accepted. They are illustrated in Figure 1. 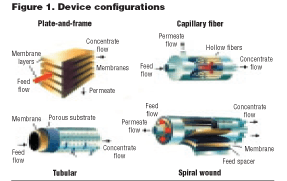 Spiral wound
The spiral wound device is, far and away, the most common device configuration used in RO and nanofiltration (NF) applications today. This is largely because it’s the least expensive configuration, due to its relatively high packing density (membrane surface area per unit volume), as well as that it’s a very competitively priced design. With the close spacing of the membrane leaves, this design has the greatest susceptibility for fouling.

Plate-and-frame
The plate-and-frame membrane device has taken many shapes and sizes over the years, and has been used primarily for the technologies of microfil-tration (MF) and ultrafiltration (UF). The challenge of packing as much membrane area into as small a volume as possible—as well as problems associated with the sealing and gasketing to prevent leakage and cross-contamination—have limited the utilization of this device. On the other hand, plate-and-frame elements are fouling resistant compared to the spiral wound configuration.

Capillary fiber
This device consists of unsupported hollow fibers that have been extruded or spun from such polymers as poly-sulfone, polyethersulfone, polyacrylonitrile, polyvinyli-dene fluoride or similar thermoplastic materials that are manufactured with pore sizes in the microfiltration or ultrafiltration categories. The capillary fibers (also known as hollow fibers) are constructed with inside diameters of several millimeters (mm) and wall thicknesses of fractions of mm. In most cases, the permeate flow is from the inside of the fiber to the outside (lumen feed), although the elements with the feed flow on the outside (and the permeate exiting from the lumen side) are considered to be more fouling resistant. Capillary fiber devices are beginning to be widely used for treating surface water sources to meet new U.S. Environmental Protection Agency (USEPA) drinking water regulations such as the Enhanced Surface Water Treatment rules and those addressing disinfection by-product precursors.

Tubular
These devices are differentiated from capillary fiber devices because they’re constructed of a membrane-coated backing material (as with the spiral wound and plate-and-frame), which is wound into a tubular shape. Because this construction is more pressure tolerant than capillary fibers, the diameters of tubular devices can be made larger, thereby improving their tolerance to suspended solids. Most of the ceramic devices today are in the tubular configuration. The inside diameters of tubular devices typically range from about 7 mm to 25 mm, and the flow is virtually always lumen feed. Tubular elements are made for all four membrane technologies (MF, UF, NF and RO).

In 1960s Europe, the membrane industry took a different tack, concentrating more on MF and UF technologies in wastewater and chemical processing applications. These activities resulted in the development of other device configurations (tubular, capillary fiber, and plate-and-frame) because MF and UF—with their higher flux rates—can justify higher element cost (still relatively inexpensive on a flow rate basis), and these other configurations, with superior fouling resistance, require less pre-treatment.

In addition to system design and to minimize fouling, O&M (operation and maintenance) of the operating system can address fouling issues. Whereas today’s RO spiral wound configurations cannot be backwashed, the other configurations generally do allow for this consideration. As a result, most of the fouling layer can be dislodged from the membrane surface without removal of the element or chemical cleaning. Spiral wound elements must be chemically cleaned in a relatively labor-intensive batch process.

As stated earlier, a significant factor in wastewater and chemical processing applications is the desire to concentrate the solute as much as possible. In membrane engineering jargon, this translates into operating the system at a high recovery. Figure 2 illustrates a complete membrane processing system. In terms of function, it could also represent a single membrane element.

The percentage of feed flow that passes through the membrane and becomes permeate is known as “recovery,” which is permeate flow rate divided by the feed flow rate. This feature is set by the system designer based on the size of the selected feed pump. Typically, for water purification applications, recovery is set below 80 percent. As recovery is increased (to decrease the concentrate volume), the concentration of contaminants in the concentrate stream increases significantly.

In an ideal system, all of the contaminants to be removed are separated by the membrane and exit the concentrate stream. In the cases of RO and NF (dealing with salts rejection), no membrane rejects 100 percent of the solute on the feed side; this solute leakage is known as “passage.” Expressed as “percent passage,” the actual quantity of solute that passes through the membrane is a function of the concentration and kind of solute on the feed side. Under high recovery conditions, the concentration of salts on the feed side is increased and, because rejection is always a percentage of salts in the feed stream, the actual quantity of salts passing through the membrane also increases. Many applications demand, in addition to a minimum concentrate volume, the permeate quality be high enough for the intended use. This “catch-22” predicament of permeate quality decreasing as recovery is increased can impose design limitations. Also, the increased osmotic pressure resulting as recovery is increased also imposing a design limit. Generally, pumping pressures in excess of 68 bar (1,000 pounds per square inch, psi) are impractical for most applications.

The relationship between recovery and concentration of solute in the concentrate stream is illustrated by the data in Table 2 and plotted in Figure 3. The concentration effect resulting from pumping a certain percentage of the solvent through the membrane is represented mathematically by the term “recovery,” also known as the “concentration factor.”

The above issues underscore the critically important requirement to test all streams in wastewater or chemical processing applications. Testing ranges from a simple cell test to determine if a specific membrane polymer will perform the separation up to a complete pilot test run on a “side stream” for a period of 30 days to six months. The latter is used to generate total system design data and identify possible long-term fouling problems.

Conclusion
One recent market forecast predicts worldwide membrane system sales for 2002 will be $5.2 billion, growing at an average annual growth rate of 7 percent a year to $7 billion by 2006. I estimate that water purification applications account for at least 90 percent of sales today. More aggressive marketing by membrane systems and membrane element manufacturers, combined with increased publicity on specific applications, would skew these figures in favor of wastewater and chemical processing applications. These applications represent an impressive untapped potential whose time has come.

About the author
Peter S. Cartwright, president of Cartwright Consulting Co., Minneapolis, is a registered professional engineer in several states. This article is taken from Cartwright’s symposium at the 20th Annual Membrane/Separations Technology Planning Conference on Nov. 18, 2002, in Newton, Mass. He has been in the water treatment industry since 1974 and has published more than 100 papers and articles on related issues. A member of the WC&P Technical Review Committee since 1996, Cartwright has been chairman of several WQA committees and task forces and has received the organization’s Award of Merit. He can be reached at (952) 854-4911, (952) 854-6964 (fax) or email: cartwrightconsul@cs.com