Summary: During the last 10 years, many activated carbon (AC) suppliers and users have been confronted with new challenges for their AC applications. This article describes new test methods developed to help the activated carbon industry better cope with these AC testing and performance information needs.

Previously, we provided an article on American Society for Testing Methods (ASTM), U.S.  Environmental Protection Agency (USEPA) and American Water Works Association (AWWA) test methods used by manufacturers and users of activated carbon.1 The carbon industry has used these standard test methods a long time to control sorbent quality during manufacture, and purchasing agents use these test methods in their product specifications bid packages. This 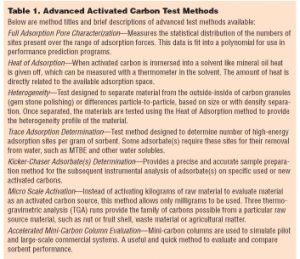 Differentiating between AC
The structure of activated carbon is composed of interconnected domains of fused benzene rings, called graphite plates, organized with some localized order on a molecular level. The adsorbing pores are defined by the gap, angle and spacing between the graphite plates. The adsorption forces in activated carbon are due to intermolecular interactions between carbon atoms in the structure and the adsorbing molecule. These intermolecular attractions—called London, van der Waals or dispersion forces (see www.chemguide.co.uk/atoms/bonding/vdw.html)—are analogous to gravitational forces, but are significant only on a molecular scale. They’re additive, temperature independent, and non-specific but very short-ranged forces. The individual interactions between the adsorbate with nearby carbon atoms propagate into a force field within the voids of the structure. The adsorption sites are simply a region within a void, the size of the molecule of interest, within the structure of this force field. The observed adsorption force for a specific adsorption site within an activated carbon structure is the sum of all the interactions and nearby carbon atoms. The adsorption properties of an activated carbon can be fully characterized by measuring the statistical distribution of numbers of sites present with different adsorption forces. 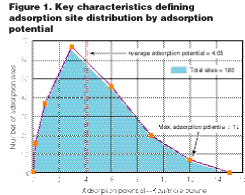 Figure 1 shows a typical statistical distribution of number of sites at the various adsorption forces or potentials. The data can be fit to a chi square distribution to compare a set of observed frequencies to a theoretical or expected distribution to determine if a significant difference exists between the two frequencies. This statistic can generate the three empirical coefficients listed on the graph below. These characteristics fully define the distribution, thus adsorptive behavior of the activated carbon and therefore specify the carbon performance. Three numbers are easier to use in carbon comparisons and specifications than a complete statistical distribution.

This characteristic curve data can then be transformed into single and multicomponent adsorption isotherms—a log/log plot of adsorbate per gram sorbent on the ordinate, Y-axis, to the remaining unadsorbed adsorbate concentration on the absicca, X-axis—using computer prediction programs based on Polanyi adsorption potential theory.1 This is also the only carbon adsorption data required to be input into these performance prediction programs that can model most any gas or liquid phase application. A computer data library of these activated carbon characteristic curves can then be used to optimize the carbon selection for a given application.

Evaluating a carbon or related raw material against a bank or library of other carbons already tested can be a valuable tool in assessing how likely it will perform in a particular application. A given activated carbon product performance can be compared to standard commercial carbons for any application area selected. This quickly allows determination of true differentiation in product properties or adsorptive performance before spending time, effort and money on activation equipment or process development.

Experimentally, the characteristic curve can be defined by measuring adsorption over the range in pressure, or concentration, that utilizes all the different adsorption sites. Many different experimental methods and any gas or liquid-phase adsorption system can be used. For best results, the following criteria should be employed for selecting a method:

For a full characterization of activated carbon pore structure, a fully automated “modified thermogravimetric analyzer” generates seven orders of magnitude adsorption isobars. Evaluating sorbent performance over seven decades of concentration provides an understanding for many water applications. This instrument accomplishes the above goals by directly measuring the amount adsorbed gravimetrically, using a flowing stream of pure gas adsorbate to minimize concentration gradient complications, and changing the relative pressure by changing temperature.2 The carbon sample is conditioned to 250oC in helium. As a standard adsorbate, 1, 1, 2, 2 Tetrafluoroethane (HFC134a) is used because it’s safe (non-flammable and low toxicity), inexpensive and readily available. By cooling then heating the sample, both adsorption and desorption isobars are measured and, if the results coincide, equilibrium is demonstrated (in practice, small differences in the curves are accounted for by using an average of the two curves). Adsorbing until equilibrium is obtained provides the ultimate adsorption capacity at each vapor phase concentration. The resulting characteristic curves are fit to log/linear polynomials for use in the performance prediction programs, and fit to the chi square distribution to generate the three key characteristics as shown in Figure 1.

Activated carbon specification
The problem with full characterization of carbons is that few people have the means or equipment to satisfy the above criteria. A full characterization isn’t presently a viable means of specifying activated carbons. The three key characteristics defined in Figure 1, however, define the full distribution. Therefore, simple tests that measure these three characteristics directly can be used as specifications. The following are test methods that directly measure the three parameters of the chi square distribution, namely:

The activity level for activated carbon is measured by adsorbing a gas or solute (iodine, butane, carbon tetrachloride, and nitrogen are popular) at near saturation conditions, thus filling all the pores with any significant adsorption force present. The measured amount adsorbed on the carbon is roughly proportional to the total adsorbing pore volume converted and reported as an activity number, or index. For relative comparison, or a specification test, the units aren’t important. For comparison to actual total pore volume, the values are converted to units of cubic centimeters pore volume occupied per gram carbon (the observed density for iodine in the carbon pores is only about 40 percent of the handbook value). This anomalous low density is due to poor packing in the narrow activated carbon adsorption sites.

A simple, fast and portable test is heat of immersion. A small portable heat of adsorption measurement equipment unit is commercially available. This equipment will allow a direct comparison of the adsorption characteristics of two carbons in a test that takes only a couple of minutes. The adsorbate is typically mineral oil, because it’s inexpensive, safe and, again, readily available—but can be glycerin, glycol or corn syrup to make the test more relevant to the specific customer application. The results translate to relative comparisons between carbons for average adsorption force (adjusted for total pore volume).

There are a variety of trace adsorption test methods that can be used. A gas phase adsorption measure is faster, simpler and less expensive than most liquid phase approaches. For an accurate measure of a single isotherm point, activated carbon loading curves vs. time are generated, at pressures from 100 microns (µm) to 6 atmospheres, using an automated molecular probe device. Another way of expressing this pressure is 0.00147-88.2 pounds per square inch absolute (psia). For estimating the maximum adsorption force, typically the adsorbing gas used is pure methane at atmospheric pressure onto a vacuumed activated carbon. Preparing vacuumed activated carbon is a proven way to protect it from picking up contaminants in storage until used. The carbon is conditioned by vacuuming to 10-µm pressure and equilibrium is determined when the loading curve no longer changes with time. The results can also be correlated directly to carbon performance in many trace adsorption applications such as MTBE adsorption from drinking water.

Heterogeneity testing of AC
A problem arises when the carbon product isn’t homogeneous in its activity number, either between granules (interparticle) or within a granule (intra-particle). In the case of a heterogeneous sample, the activity number averages to the measured value for the overall sample, but the pore size distribution is distinctly different for different granules (or parts of a heterogeneous granule). For pore size distributions, a different shape is observed when combined, generating multiple modes (or humps), which result rather than simple numerical averaging. As a result, characteristic activity numbers or specifications relate to performance only when the sample is homogeneous, both particle to particle and within each particle. Heterogeneity can cause as much as a tenfold decrease in performance for municipal drinking water carbons in removal of trace contaminants such as MTBE. For efficient removal of MTBE from water, the carbon needs a maximum number of high-energy sites.

A heterogeneity test measures the difference in adsorption characteristics (heat of adsorption is standard) between the inside and outside of the particle, large and small particles, and high and low-density particles (mixed products). A computerized differential heat of adsorption instrument is used for making relative comparisons of adsorbent samples by directly measuring the difference between adsorption characteristics of different samples or portions of a sample (or particle).

Conclusion
To remain successful, water treatment professionals have to take full advantage of advances in on-site testing, software programs and advances in laboratory sorbent performance testing. While water treatment professionals have no need to be able to calculate these performance parameters, being aware of them enables them to better understand specific carbon specifications and select the best carbon for a particlular application.  New water problems such as arsenic, mercury, lead, MTBE, microorganisms, perchlorate, disinfection by-products, etc., create opportunities for new testing methods and remediation technologies.  This article describes new test methods for the activated carbon and related sorbent industries.

About the authors
Dr. Mick Greenbank is a surface chemist with 26 years of experience. He provides the two-day PACS short course, “Selecting the Best Activated Carbon for the Specific Application.” Dr. Greenbank holds the Activated Carbon Hall-of-Fame Award based on his career with Calgon Carbon Corp. He provides exclusive consulting services agreements and advanced testing methods at PACS. He can be reached at email: [email protected]

Dr. Henry Nowicki, president of PACS Testing and Consulting Services Inc., has provided litigation and expert witness services for major water, environmental and sorbent issues. A former member of the WC&P Technical Review Committee, he has published over 100 papers and presents short courses for PACS. He can be reached at email: [email protected]

Homer Yute has developed seven software programs for the activated carbon industry. He is a mathematician and computer programer for PACS Inc.

Barbara Sherman leads the PACS short course program. A wide range of courses and four conferences are offered throughout the year, including the International Activated Carbon Conference, held in September in Pittsburgh. This year will be the 11th Annual IACC event.