Modern cars have a multitude of monitoring sensors and alarm systems to help drivers avoid potential inconveniences or even dangerous situations—and stay on track with required maintenance. It’s very unlikely I’ll ever run out of gas, even if I fail to check my fuel gauge regularly, because my car has a monitoring sensor and alarm that flashes and sounds if my car starts to run low. Similarly, it’s easy for me to stay on schedule for changing the oil, because my car tracks my oil change and engine usage history for me, and lets me know when the car is due for an oil change. Because of these sensing and monitoring devices, I have a much lower chance of being stranded in the middle of nowhere at an inopportune time because of a car problem that occurs from hidden mechanical wear or damage. The sensors and alarms on my car keep me safer, especially if I’m the type of driver who fails to keep careful track of maintenance or inspect the car regularly.

Sensing and monitoring devices are also being incorporated into many of today’s modern residential drinking water treatment systems. These devices help to ensure consumers stay on schedule with changing of replacement elements and alert them if a system failure is detected. These performance indicating, sensing and monitoring devices are especially beneficial in situations where the system is being relied on to reduce health effects contaminants that cannot be seen, smelled or tasted.

Performance requirements
The NSF Joint Committee on Drinking Water Treatment Units (DWTU) has recognized the proliferation and benefits of performance indicators, and has incorporated requirements for them into a number of the ANSI/NSF DWTU standards. These requirements are summarized in Table 1. 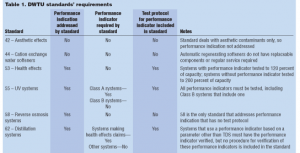 Because of the various scopes of standards in terms of technologies and contaminant reduction capabilities, the requirements for performance indicators vary significantly from standard to standard. Standard 42: Drinking Water Treatment Units—Aesthetic Effects and Standard 44: Residential Cation Exchange Water Softeners don’t address performance indicators. Because Standard 42 addresses only aesthetic contaminants, any failure of the system will be noticeable by the users through undesirable tastes, odors or other characteristics—it won’t lead to any adverse health consequences. Cation exchange water softeners regenerate regularly and don’t have replaceable treatment components as many of the other technologies do. As long as salt is available in the brine tank, the water softener can operate for years without any further maintenance. As such, performance indication requirements aren’t included in Standard 44.

Conclusion
Much like today’s cars, many modern residential drinking water treatment systems incorporate monitoring devices to help keep consumers safe. Most health effects contaminants that could be present in drinking water at unsafe levels aren’t detectable through appearance, taste or odor. The presence of these contaminants isn’t easily noticed by consumers, which underscores the importance and benefits of performance indicators. Recognizing the importance and benefits of these devices, the NSF Joint Committee on DWTUs has incorporated requirements and test protocols into the standards. As a result, just as I’m safer from mechanical breakdowns and running out of gas in my modern car with its monitoring capabilities, consumers of treated drinking water are safer from system failures or maintenance neglect through the incorporation of performance indicating monitoring devices.

About the author
Rick Andrew is the technical manager of the Drinking Water Treatment Units program at NSF International. He has been with NSF for four years. His previous experience was in the area of analytical and environmental chemistry consulting. Andrew has a bachelor’s degree in chemistry and a master’s degree in business administration from the University of Michigan. He can be reached at email: andrew@nsf.org.