Cocerns of Indoor Mold: What can be done?

The issue of indoor mold contamination and potential threats related to mold exposure is growing in intensity. Defendants in mold litigation suits have included contractors, sub-contractors, component suppliers, architects, property managers, building owners and others. Currently, there are over 16,000 U.S. lawsuits pending that allege mold damage to homes and businesses. Individual high-profile settlements have reached levels in the range of $20-30 million. Insurance companies estimate, if the current trend in mold-related litigation continues, policy rates will have to be increased by as much as 40 percent.

Does the mold issue impact the water treatment industry? Undoubtedly, considering an essential ingredient in the growth of mold is water. Any appliance that can leak or cause condensation can contribute to the growth of mold. Point-of-use (POU) devices are often placed in areas where mold spores are frequently present, such as under kitchen sinks. Consumers should be aware of the need to minimize persistent moisture sources to reduce the risk of mold growth on susceptible surfaces.

Mold risks
Mold can be toxigenic (cause a chemical poisoning), pathogenic (cause an infection) or allergenic (elicit a hypersensitive immune response). Reports of cases of adverse health effects due to mold exposures are probably greatly underestimated since knowledge isn’t widespread among health agencies as to the possible link. Lack of recognition of the association with mold to human disease combined with complexities of evaluating effects of combined pollutants from environmental sources may also lead to an underestimation of the true incidence of mold-mediated illnesses.

The visible presence of mold growth indoors should be a concern to any individual. In large numbers, mold spores and other metabolites of the organisms can cause allergic reactions, asthma attacks, infections and other respiratory, neurological and skin problems. Both living and dead mold can be dangerous. In addition to adverse health effects associated with indoor mold growth, costly structural damage may occur.

How much mold is too much? In homes with water damage and fungal growth, mixed populations of fungi may be present. Health complaints are known to occur most consistently when average airborne concentrations of spores are above 2,000 colony-forming units per cubic meter (CFU/m3). Concentrations above this level are considered to be a serious risk factor for the occupant’s health.1 The time spent in a contaminated environment also can be a factor in illness. Thus, detection of even one colony of Stachybotrys, a toxin-producing mold, may be cause for alarm.

Symptom manifestation and severity depends largely on host response/susceptibility, dose, exposure route, time and frequency of the exposure, and nature or virulence of the organism. The presence of allergic disease to a specific agent will greatly increase upon re-exposure to that agent.2 Adverse effects may surface immediately following re-exposure or be delayed after multiple exposures over time. Therefore, people who’ve experienced only mild allergic reactions or no reaction may suddenly be very sensitive to specific agents. The health effects of many fungi and/or fungal toxins haven’t been studied or aren’t yet known, and questions remain as to long-term effects of chronic exposures to low levels of fungal contaminants in residential settings. Early exposure in children may predispose them to chronic health problems in the future. Determining who is at risk now or may be in the future is a difficult task.

Children & sensitive populations
Those most susceptible to invasive mold infections are the immunocompromised. These individuals constitute less than 20 percent of the population and include the very young, elderly, pregnant women and persons with diminished immunity either due to medical intervention (organ transplants), previous illnesses (cancer, liver disease), pre-existing respiratory conditions (allergies, chemical sensitivity, asthma) or infecticoid steroids may also be a preeminent factor. For these populations, risk of serious illness due to exposure to microbial pathogens is greater than the general population (see http://www.epa.gov/safewater/crypto.html or www.cdc.gov/hiv/pubs/brochure/food.htm), and the seriousness of mold is exacerbated by the fact many fungal diseases don’t respond to conventional treatment. Commonly present mold can produce serious and invasive infections in immuno-compromised individuals. Infection rates can be as high as 25 percent in high-risk groups3 and death can result in a matter of days to weeks. 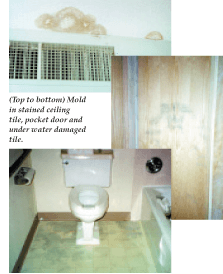 Children are one of the most vulnerable groups to indoor mold. This fact was recognized by the American Academy of Pediatrics, which issued guidelines regarding avoidance of the potential toxic effect of indoor molds in 1999. Mold allergies appear to be higher in children than adults4 and children have weaker immune systems, making them more susceptible to infections and increased effects of the pathogenic agent. Children in homes with dampness and/or mold growth are at higher risk for episodic and/or persistent upper respiratory symptoms such as rhinitis, blocked nose, sneezing, eye irritation and hoarseness as well as lower respiratory tract symptoms such as dry or productive cough and wheezing. Other symptoms include skin redness and itching, headache, fever, excessive fatigue, joint pains, ear infections and nosebleeds.

A cozy environment
We’re all exposed to mold on a daily basis, but health effects usually arise from exposure to a high concentration of mold from indoor environments. Mold spores gain access through open doorways, windows, heating, ventilation and air conditioning systems. Spores in the air outside attach themselves to people and animals, making clothing, shoes, bags and pets convenient vehicles for carrying mold indoors. Building materials subject to moisture before use can harbor viable mold spores for years.

Once grown to high numbers, mold may be easily dispersed in indoor environments, invading the human host by routes of inhalation, ingestion and external contact with the skin. Visible mold may be much more of a problem than first thought since mold growth, sufficient to influence air quality, can extend as much as 0.5-1 meters beyond visible mold cultures on wallboards. Thus, hidden mold—behind wallpaper and under carpets for example—may still affect indoor air quality.5

Recently, researchers at the University of Arizona surveyed 1,330 samples from indoor environments of 160 homes across the United States for the presence of known mold allergens (i.e., Alternaria, Aspergillus, Penicillium, Chaetomium, Cladosporium, Helminthosporium, Stachybotrys, hyphal fragments and others). One hundred percent of the homes tested positive for mold, and 73 percent of surface samples tested in homes were positive for one or more of the aforementioned molds. The bottom line is mold is found everywhere indoors; however, surfaces under the kitchen sink were among the most positive sites (83 percent). Sites where one might expect to find the most mold, i.e., shower grout, were among the least positive (49 percent), possibly because these areas are frequently cleaned.

A study conducted in Finland from 1993-94 reported that moisture problems were present in 52 percent of the homes surveyed, with visible mold growth in 27 percent of the homes. Follow-up questionnaires revealed exposure to moisture was significantly associated with sinusitis, acute bronchitis, nocturnal cough, sore throat, colds and tonsillitis.6 Similarly, U.S. surveys show home dampness is reported in more than half of all households sampled.

Treatment measures
The recognition of adverse health effects associated with indoor mold exposures isn’t new, dating back to Biblical times where a passage in Leviticus (14:33-57) indicates problems with mold and the need to clean the environment, avoid exposure and discard contaminated materials. Little has changed regarding the recommended response toward indoor mold. 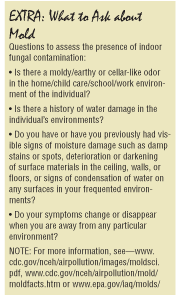 As a rule, fungal growth indoors shouldn’t be tolerated and measures of removal and decontamination need to be applied at the first sign of insult. General clean-up procedures involve identifying and eliminating the moisture source, cleaning, disinfecting, drying the moldy area, and disposing of any material that has moldy residues. Specialized filters may help to remove fungal spores from the air while various disinfectants, including a 2.4 percent bleach solution, are effective at inactivating mold spores on non-porous surfaces. Unless the source of moisture is removed and contaminated areas thoroughly cleaned and disinfected, mold growth is likely to reoccur. Rapid cleanup (within 24-48 hours) of water-damaged homes can help to minimize growth and spread of fungal contaminants, as can routine and maintenance cleaning.

Exposure to molds during remediation can be 10-1,000 times higher than background levels. In severe situations, professional remediators with specialized respirators and protective clothing may be needed. Currently, no target or threshold levels for mold or mold toxins have been sanctioned by professional organizations and there are no U.S. Environmental Protection Agency (USEPA) or Centers of Disease and Control and Prevention (CDC) regulations or standards for airborne mold contaminants. Furthermore, there are no absolute monitoring standards or detection protocols set, thus decisions on whether a building has a mold problem are often made arbitrarily.

Conclusion
Scientists continue to grapple over the risk of indoor mold contamination, benefits of routine cleaning and common moisture control needs. In addition, there are many unknowns regarding overall health impact of specific and combined mold exposures on general and sensitive populations. Although we don’t know enough to adequately assess health risks of mold, litigation and legislation prod on.


California has taken the lead in development of mold prevention and legislative efforts (see www.cal-iaq.org//iaqsheet.htm#Mold). Gov. Gray Davis signed Senate Bill 732, the Toxic Mold Protection Act of 2001, directing the California Department of Health Services to develop and adopt standards for mold exposure limits for indoor environments by July 1, 2003, addressing commercial, industrial and residential buildings. The U.S. Toxic Mold Safety and Protection Act of 2002 also was introduced to Congress, calling for research, education and assistance to victims dealing with mold infestations (see http://www.house.gov/conyers/mold.htm). The mold issue promises to be at the forefront for some time to come.