Summary: The following information was provided by the chief of the Lake Bluff, Ill., Fire Department, who is a member of a state anti-terrorism task force and gave a presentation on this topic to the Illinois Water Quality Association roughly a year ago. Originally published for municipal water agencies, it’s been modified here to include a few issues related to POU/POE dealers.

At the time of this article’s writing, my fire department, and law enforcement agencies across this country were preparing for the anniversary of the Sept 11th terrorist attacks. The past year was filled with many planning sessions, exercises, implementations and re-examination of preparedness for catastrophic events such as those that occurred on that day when four airplanes were hijacked to be used as flying bombs. The later discovery of anthrax in letters sent through the postal system, and resulting deaths, made us contemplate our vulnerability to other types of attacks, such as biological agents in water supplies. 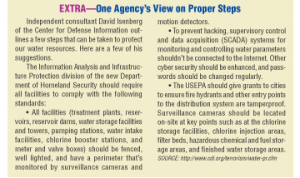 During a recent exercise planning for possible terrorist activities, a reporter asked me, “When can we get back to ‘normal’ in this country?”

I probably shocked the reporter when I said “from now on, this is normal.” Since terrorists have been able to penetrate our borders and kill Americans on American soil, other attempts will likely follow. Those who propose to undermine the confidence in the ability of our law enforcement, emergency response teams and public utilities to protect U.S. citizens, hope once again America becomes complacent. As stewards of one of America’s most important infrastructures—the public water supply—complacency cannot be allowed.

Avoid predictability
One of the key ingredients in any plan for anti-terrorist preparations is the theory that predictably of an operation is a vulnerable operation. Remember, those who attacked America in 2001 spent months in this country prior to Sept. 11, planning, rehearsing and re-planning their activities. Do not allow your operation to become predictable. If it’s customary for your operation to have certain functions at a certain time and day of the week, change that operational timing occasionally to make your facility more “unpredictable.” A terrorist will usually target an operation that’s predictable with consistent schedules and set patterns, looking for those that are unprepared rather than one that’s prepared for various scenarios.

If a water treatment facilities manager hasn’t established a “first-name basis” relationship with the local fire chief, it’s not too late to do so. The same is true for professional point-of-use/point-of-entry (POU/POE) water treatment equipment dealers who may do work for small systems, whether municipal, commercial or light industrial. Your best source of information, plan review and help in time of emergency can be your local fire department. Get to know your fire department prior to needing it.

Getting to know you…
Participate in fire department exercises to test readiness of your facility—or those that you manage or do work for under contract for potential incidents. Both state and federal governments are conducting readiness exercises throughout our nation, but a water facility’s entry to those drills will usually be arranged by the local fire department. Welcoming exercises at these facilities will not only help test your plant’s or client’s readiness, but also familiarize those who’ll respond to an actual incident to your or their facility’s layout, potential hazards and personnel.

It’s impossible to predict how an attack on a water treatment facility might actually take place, but consider various alternatives. How secure is the computer system? If the plant allows off-site operation during times of emergency, an attacker might not even be required to enter the facility to do damage and, more importantly, to the ensuing public confidence in the operation afterward. 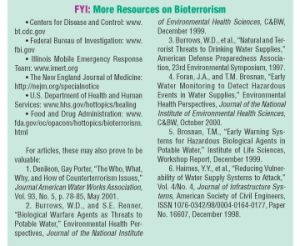 Identification, please
Facility ID cards should continue to be monitored for both employees and guests. Many agencies require employees to display photo IDs, but allow outside consultants “full access” without proper identification—including POU/POE dealers, in some cases. Agency or company vehicles should continue to be locked when not in use—and keys removed. Several FBI warnings revolve around the stealing of agency vehicles, and using those vehicles to gain access to buildings and grounds of guarded installations. Simple measures such as key control and vehicle locking can limit such deception.

A delivery of hazardous materials to a water treatment facility is quite routine, but such deliveries should raise awareness of possible attack. It’s good practice to require a supplier to send a fax of the driver’s license for all hazardous materials vehicle operators who will seek entry beyond the outer fence, and checking that ID prior to allowing entrance. The same would be true for POU/POE dealer staff that may be making general deliveries or service calls as well. Make sure your client knows who your people are and is prepared to ask for IDs otherwise.

Senior management of public water agencies can be very influential in promoting employee awareness of security. If upper management takes security measures for granted, don’t require display of proper photo IDs and minimizes the role of security at the water facility, workers will note such attitudes—and plant security will suffer.

Conclusion
Americans have become accustomed to longer security lines at the airports. They arrive at the airport earlier than they did prior to Sept. 11 and allow screeners to examine their luggage, carry-on items and shoes prior to flight. These are all signs that Americans want to be protected against terrorism and are willing to do their part. Americans also expect their emergency responders to be prepared for any terrorist incident and are willing to fund training and equipping of those responders. Likewise, they expect their public utilities to be prepared for possible terrorist attacks. The Sept. 11 attacks remind both emergency responders and public utilities to work together, plan together, conduct exercises together and protect the public as a team. You, as a water treatment professional, can do a lot to help meet that goal. I do believe that this has become “normal duties” in the minds of our citizens.

Chief Robert B. Graham has been a member of the Lake Bluff Fire Department in Illinois for 28 years, 23 of those as chief. He has training and/or certification as a hazardous materials technician, hazardous materials specialist, hazardous materials branch safety officer, chemical/biological weapons of mass destruction technician and chemical/biological weapons incident commander. He’s the former chairman for the State of Illinois Governor’s Task Force on Hazardous Mate rials as well as the State of Illinois Hazardous Materials Advisory Board. And he has provided training for emergency responders in 17 countries around the world.

For articles, these may also prove to be valuable: