Where a Big Gamble Paid Off: Truckee Meadows Water Systems, of Reno, Nev.

Las Vegas may be the gaming capi-tal of the world but Michael Guidara, CI, rolled some serious dice when on April Fool’s Day, 1993, he walked into his boss’ office. In an eerie sense of timing, Guidara was there to share what he had been mulling over for quite awhile—he was resigning as general manager of a large and successful water bottling company. One might say he had seen the light at the end of the tunnel, and it was in the form of a… water cooler.

“As soon as I saw the filtration, POU (point-of-use) coolers come out, I saw a huge market, ” Guidara explains. “I thought, the first guy in this market will get the lion’s share of it. I started out of my garage and people thought I was nuts for quitting a good job as general manager of a large bottled water company and starting my own business. I began by renting filtration coolers and RO (reverse osmosis) coolers and undersink ROs. That slowly progressed into commercial and residential systems. ” 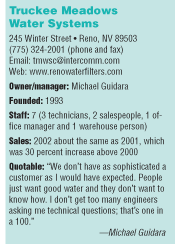 Bear in mind, he adds, “Change is the price of survival. ”

Thriving in the desert
In retrospect, Guidara and his business—Truckee Meadows Water Systems, of Reno, Nev.—hasn’t only survived but also thrived. Currently, the residential water treatment market makes up 30 percent of his business while filtration fills out 50 percent, coffee comprises 15 percent, and the remaining 5 percent is industrial. The company’s best year was 2001 when it added a few “huge contracts,” says Guidara, namely the Fallon (Nev.) Naval Air Force Base, which experienced a leukemia cluster with 15 cases reported in the last few years. Though the illness’ source has never been pinpointed, the base is located near an old glacier where arsenic can run up to 100 parts per million (ppm) and the pH can climb anywhere between 8.5 to 9.5 (see EXTRA for more information regarding the Fallon leukemia cases).

Java is all the rage
“Coffee is big for us,” Guidara, 38, says. “We would go into these businesses, and they would say, ‘OK, you have our water but now our bottled water company is doing our coffee and we don’t want two bills. Can you do our coffee?’ And we fill Starbucks, gourmet coffees, Folgers and Yuban. And then, of course, you’re in the business and people will go, ‘Well, what about my homes?’

“We never advertise; it’s just personal contact. People ask me why we don’t advertise (aside from the yellow pages) and I tell them that I would rather hire somebody to go talk to my customers. ” Truckee Meadows also dabbles in ice makers, restaurant systems, boiler systems, commercial softeners for the casinos, and DI (deionization) tanks. He insists, “If you want a system, we’ll figure out how to do it—UV (ultraviolet), ozone—whatever it takes to make a living. ”

An outsider would gather that Guidara’s next move would be to strike while the brand is hot and expand from his present staff of seven. He shudders at the thought: “I really don’t want to expand; I want to stay where we are. I don’t

want to get too big. I would rather have slow growth in the area of 10 percent a year. Rapid expansion would mean not taking care of our customers and losing control. ” Meanwhile, Guidara will be happy knowing he owns outright the 5,000-square-foot office and warehouse (purchased in 1997) and the five vans that make service calls and deliveries.

With many companies, this “slow growth” talk may be a lot of smoke, but you get the idea Guidara lives by this credo. As he says later, “Nothing grows unless we make it grow. Nothing comes in over the phone. They (business segments) all grow at the same speed because we go after them. If we sat around and waited for the phone to ring, we would have been out of business by now.

“You make a lot of money on softener sales, but our bread and butter is our filter coolers. ”

His old school ways is evident in his approach to the company’s website, www.renowaterfilters.com. Sure, Guid-ara would like to have it e-commerce ready to take orders via credit card but, for now, he’s happy with its basic functions: “When everyone started getting websites, I thought we had to have one. We don’t get much feedback. It’s there if someone wants to know what a piece of equipment looks like. ”

Since, by his estimation, 95 percent of Guidara’s customers are on municipal water, chlorine is the only issue that needs addressing. He explains, “Reno has some of the purest water I have ever seen. Our total dissolved solids (TDS) count is 60 ppm and the hardness is 3 grains. When you get to the outlying areas and people start drawing from the well, that’s where you find a lot of silica, hardness and arsenic in the water. ”

Weapons against these water problems include resins from Purolite or activated alumina for arsenic as well as a softener in the house and RO under the sink; silica is usually sequestered with phosphate; a softener is obviously used for hardness, and a sanitizer is often recommended for high iron.

Welcome wagon
Guidara is eager to have the Water Quality Association (WQA) national convention and trade show in his backyard this year (Las Vegas), and it’s not because he can forgo the airplane fares. A member of the WQA, he plans on bringing his entire staff to the show to soak up as much information as possible. “We’re going to get educated,” he promises. “Training of employees is so key. Without the WQA, we would be lost. I would like to get three of us as CWS (certified water specialists) by the end of 2003.”

The lack of a CWS education doesn’t prevent the company from testing customers’ water. Truckee Meadows will test for hardness, TDS, pH and iron, Guidara says, “but if someone is serious about buying a water treatment system, we will defer to a lab. If you’re going to spend $600,000 on a home, what’s $150 to get your water tested? These are mostly people on wells.”

With a burgeoning market like Reno as his home base, Guidara seems secure in his standing in the water treatment business. The high desert city of 600,000 is famous for its boating, fishing, hunting and off-roading. According to Guidara, Reno is only second to Las Vegas as the fastest growing metropolitan area in the United States.

With friendly, local competition provided by Culligan and Kinetico dealerships, life in Reno is not without its travails. Guidara intones, “My two biggest concerns here are taxes and insurance. Every town seems to require a separate business license. A lot of the big corporations rent the filtration coolers and rent them below cost so that’s a pain. We place a service sticker on the side of every piece of our equipment. Every three months, we go out and test, clean and sanitize that equipment. I think it should be mandatory for everybody.”

When pressed to admit any type of anxiety when he first ventured out on his own, Guidara doesn’t budge an inch—almost like he knew it would work out well. “I never worried because being from the bottled water business, I knew (I would make it) if I kept my numbers and kept growing and taking care of my customers,” he insists. “I just put on a tie and grabbed my briefcase. I visited every business in this town three times while peddling water coolers and they respected that. They saw me as someone trying to better himself… People like to see local companies do well and the customers made us successful.”

Conclusion
Unlike 10 years ago, Guidara doesn’t see much change in his business or the industry as a whole. He does say that industrial RO systems and DI units will grow in demand. Otherwise, he expects little deviation between equipment needs today and those 20 years from now. He plans on continued success with a no-frills approach: “We’re not a flamboyant company. The only pizzazz we have is a rainbow for a logo.” For Guidara, the rainbow seems to lead to a pot of gold along with dice that add up to seven or 11.