In the eight years Long Island Water Services (LIWS) has been in business, it has committed every mistake in the book. This statement comes from Barry DeLong, vice president of sales at East Islip, N.Y.-based LIWS. He says it with a smile, knowing full well that the business has overcome some early growing pains and is now primed to mine the water treatment market in Long Island and neighboring communities. For instance, DeLong recalls his initiation as a salesperson while using one doomed marketing technique. 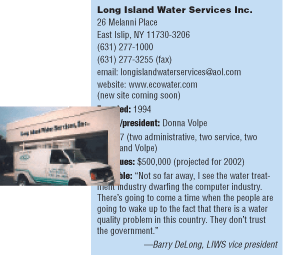 “Doing business in the Midwest is a whole lot different than doing business out here,” DeLong says. “Over here, you knock on (customers’) doors and they could be going for their shotgun. In the Midwest, they’re waiting for you to talk about their water. After attending one sales seminar, I tried cold calling here. I never saw such a negative reception. I had people telling me they would call the police. After three days, I stopped. There’s not as much competition here as you would think because it’s such a hard sell.”

Turning it around
As the old cigarette ad used to say, “You’ve come a long way, baby.” Today, LIWS is expected to reach $500,000 in annual revenues for 2002—up from $350,000 in 1999-2000—and just scored a major coup with a medical outpatient/drug rehabilitation facility to install 40 point-of-use (POU) water coolers. The operator of the facility is also closely connected to 15 other buildings so the job may lead to bigger things down the road. The bottleless water coolers use reverse osmosis (RO), ultraviolet (UV) and microfiltration all in one system.

Nevertheless, DeLong says LIWS has taken a “methodical and conservative approach” to growth and expansion with 75 percent of its business in residential applications and the remainder in commercial/industrial.

Power in numbers?
“We have three million people on the island. You would think with that many people, we would be going gangbusters,” DeLong says. “Our primary problem is that 90 percent of the people on Long Island are on public water. While there may be chlorine problems, the hardness can be anywhere between 5 to 8 grains. So when you start talking water softeners, it’s not such a big item here. Not to mention that the place has been literally pulverized with telemarketing and in-home sales.”

LIWS is the brainchild of Donna Volpe, owner and president, and James Savarese, CWS-III, vice president of service/installation. Previously, an EcoWater dealership existed in Long Island but the owner was forced to fold and LIWS took over about 200 service accounts. Savarese has 30 years of experience and is credited with convincing DeLong that there was a bright future in water treatment.

“Donna and Jim have been friends of the family for quite awhile. Jim came over for dinner one night after I had bought my house and started showing me stuff at the sink. He almost did a pitch,” DeLong, 51, recalls. “I saw what he did and I bought the (water treatment) system right on the spot. I was getting tired of the mortgage business. In this area, it’s very competitive and a dog-eat-dog world.” Prior to LIWS, he was in that line of work for 23 years. Aside from a two-year, civil technology degree from Hudson Valley (N.Y.) Community College, DeLong was sent out in an unfamiliar profession to sell equipment that he knew little about, i.e., POU/POE water treatment devices.

Home to the sale
One thing that helped LIWS’ reputation in the local water treatment industry and DeLong’s understanding of selling as well was home shows. In an average year, Long Island plays host to six home shows, which isn’t a great number, DeLong says. “We like home shows,” he says. “We can’t afford not to be there. Otherwise, we would be closing our doors.” Add to that the fact only a couple of local water treatment dealers attend the shows. March and September are big months for home shows in Suffolk County and Farmingdale, N.Y., among other locales. The largest takes place in Nassau Coliseum, where LIWS’ booth is seen by 200,000 visitors.

DeLong asserts, “You need to have your lead sources coming from three or four different methods.” Aside from home shows, LIWS advertises in the yellow pages along with bottle drops, mass mailings and new homeowner leads. In addition, LIWS is in the process of formulating a new website for the business. The site will be mainly informative and not necessarily used for ordering or purchasing, he says.

“If anyone wants to come in here (Long Island market), you need a lot of money and a lot of patience,” he explains. “At one time, people would walk right by us during a home show at Nassau Coliseum. They didn’t even know who we were. Only years later did they start looking at our RO system. So it’s been a long, plodding ordeal. Plus, people are becoming more aware of their water, especially after Sept. 11. Now we’re seeing some results.”

From the ground up
So what treatment technologies are the most popular with LIWS’ 1,600 customer accounts? According to DeLong, Long Island is heavily supplied with groundwater—170 trillion gallons from three different aquifers to be exact. EcoWater supplies all of LIWS’ residential water treatment equipment, which includes its whole-house, RO system. The company doesn’t sell individual RO systems as per its strategy. For private wells, acid neutralizers are utilized to combat low pH problems. With such a reliance on groundwater, “breast and prostate cancer incidence rates are a big issue here, but we don’t sell that pitch,” he says. Also, Suffolk County was a popular destination in the 1970s for hazardous waste.

“The (municipal) water is not that hard,” DeLong says. Nitrates are located in the North Shore and, further east, more wells are used. In more rural areas, potato farms, fertilizers and pesticides affect the water’s quality. Great amounts of iron are found on Fire Island, and LIWS is looking to explore that market with added sales emphasis. The business has accumulated many commercial accounts including the North Shore University Hospital’s dialysis center. DeLong says that LIWS is looking to enter more multi-family units.

Long Island is home to a few independent water treatment dealers, several well drillers, and Hague and Culligan franchises. All should do well if DeLong is correct when he says, “There are more people with disposable income. When the rest of the country is down (economically), it takes awhile for New York and Long Island to get aboard that train. But then it takes awhile for us to disembark.”

Conclusion
LIWS became a WQA member in 1997, and DeLong says the Gold Seal program is very important. “Everybody here—especially Jimmy, Donna and I—believe in this and love what we do. I only wish I knew about this when I was 21 and starting out. We also want to take two more tests with WQA and get to CWS-V.” Yet, he adds, “In sales, you don’t want to become too educated (technically speaking).” He believes there’s a risk in talking over customer’s heads.

The sky is the limit for LIWS as most of the pitfalls that would sink a fledgling company haven’t dampened anyone’s spirit. “We’re psyched. We’ve served our time in hell,” he says. “It’s been trial by error and we’ve used all different types of marketing techniques. We’re veterans now; we’re creative. We’re very comfortable with the outlook of this company. Our name is out there and it’s starting to pay off.”