An Update on Industry Consolidation

Since we last examined the merger and acquisition scenario in the water industry in these pages last year, the rapid pace of transactions has continued—between companies already in the business as well as firms seeking to enter the business. Widespread consolidation, at all levels of the business, remains one of the dominant trends in the overall water and wastewater treatment industry, and continues to reshape the business.

Looking first at larger-scale deals that have occurred this past year, the BetzDearborn business of Hercules was sold to the Specialty Materials unit of General Electric early in 2002. Betz-Dearborn, historically known as Betz Labs, has for decades been one of the top providers of water treatment chemicals to the world’s manufacturing and process industries. A longtime independent public company, BetzDearborn was only acquired by Hercules in 1998 but as Hercules’ financial problems mounted during the last few years, the water unit was sold off to help pay down debt, according to Hercules officials. The businesses purchased by GE were valued at $1.8 billion (or close to two times annual sales), and include some 3,600 employees. More recently GE acquired Osmonics Inc. for $253 million. The deals provide some insights into the future intent of GE in this industry, which already owns Glegg Water Conditioning (renamed GE Water Technologies) and is rumored to be looking for other water deals.

The French giant Vivendi, and particularly its subsidiary Vivendi Environnement (the parent organization of USFilter), has also been very active on the deal front in quite a number of areas. Earlier this year, the USFilter unit announced that it was selling its Filtration and Separations Group to Pall Corp. This transaction was valued at $360 million, about 1.4 times annual sales, and some 16 times trailing EBITDA—earnings before interest, taxes, depreciation and amortization. The unit is a major manufacturer of treatment products for the filtration and separation of liquids and gases, and serves the food and beverage, industrial, biotech and pharmaceutical industries, among others. This will push Pall’s level of international sales over the $1.5 billion mark, and establish it as a major player in the burgeoning water purification and reuse marketplace. 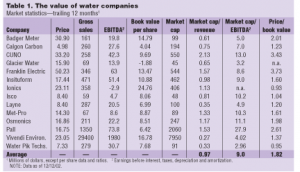 Following Culligan’s parent
Later this year, USFilter sold off its waterworks distribution business (to Thomas H. Lee Partners and J.P. Morgan Partners for $650 million) and its $80 million Plymouth Products consumer group (to Pentair). Explaining this string of divestitures, USFilter CEO Andy Seidel commented that “this will enable us to focus on the growth and development of our expanding core water-wastewater equipment and services businesses, as well as our consumer and commercial businesses.” (As a side note, this and other acquisitions bring Pentair’s total revenues in the water business to over $1 billion a year).

Elsewhere in the broader Vivendi empire, the company announced the intent to sell its 17 percent interest in the publicly held U.S. water utility Philadelphia Suburban Corp., although USFilter indicated that it would continue its various operating relationships with the utility. At about the same time, Vivendi announced its intent to purchase the assets of Southern Water in the United Kingdom, one of the major privatized UK water providers. Now, Vivendi Universal has indicated it will divest itself of Vivendi Environment by 2004.

Deals closer to home
Many of the other major water players have also been active on the “deal front.” United Water Resources, the U.S. arm of the Suez Group’s ONDEO water subsidiary, acquired U.S. Water from Bechtel and United Utilities of the UK for a reported $40 million. The acquisition added about 50 contracts serving more than a million people in the eastern United States, and approximately $30 million in revenue. Suez is, in total, the second largest water related company in the world after Vivendi.

Continuing its acquisition campaign, Philadelphia Suburban also made several acquisitions of smaller private water utilities during the year. The largest deal was the acquisition of most of the primary water operations of AquaSource Inc.—the short-lived and largely unsuccessful experiment of Duquesne Power in the water industry. The deal was priced at about $200 million, and brought approximately 170,000 new customers to Philadelphia Suburban. Most of the acquired business was located in the east and southeastern United States. The rest of the Aqua-Source business, mostly wastewater contract operations, was acquired by Southwest Water Company of West Covina, Calif. This part of the Aqua-Source business had revenues of about $16 million, and Southwest paid roughly $10 million for the business.

ITT Industries, another major diversified industrial conglomerate with substantial and growing interests in the water business, continued to make various acquisitions in the water market. ITT’s Fluid Technologies unit announced early in the year that its Sanitaire Division (a manufacturer of wastewater treatment systems and products) had acquired Royce Instruments of New Orleans, a maker of water and wastewater monitoring and control products. In May, ITT closed the purchase of the Pure Water Division of Waterlink Inc. and followed that with several other acquisitions.

On the smaller end, Crane Environmental—a unit of the broadly diversified Crane Corp.—acquired Kavey Water of Venice, Fla., a manufacturer of pre-treatment equipment for water purification. This brings Crane’s water business to approximately 120 people, located primarily in Florida and Pennsylvania. Numerous other transactions continue to occur at the smaller size level.

Conclusion
Typical water companies continue to be valued in the range of seven to eight times EBITDA—well above typical valuations in other parts of the environmental services industry. Most observers of the industry believe, given the huge developing need for additional infrastructure and more efficient water treatment, that many of these companies—and probably many new and emerging companies as well—will be attractive investment opportunities in the future. The reader will notice that a couple of companies that we have followed in the past are no longer here. Both Waterlink and Aqua Care have experienced continued revenue shrinkage and substantial devaluation in terms of their stock prices, to the point where their market values are almost negligible relative to revenues—hence, we will no longer follow them.

About the author
Steve Maxwell is managing director of TechKNOWLEDGEy Strategic Group, a Boulder, Colo.-based management consul-tancy specializing in mergers and acquisitions and strategic planning services to the water and environmental services business. Maxwell is also the editor and publisher of The Environmental Benchmarker and Strategist, an industry newsletter covering competitive and financial developments in the broader environmental services industry. He consults frequently to water companies on strategic planning and merger and acquisition issues, and can be reached at (303) 442-4800 or email: maxwell@tech-strategy.com.