Summary: What does reverse osmosis (RO) technology have to do with maple syrup? You’d be surprised. The following is just another example of how RO has infiltrated—pardon the pun—all types of applications with effective results.

Long before explorers came to America, the Indians had learned how to extract maple sap and boil it to make sugar. They were the first to recognize the syrup as a source of energy and nutrition. The Indians then educated French settlers about this in the early days of colonization. This became an integral part of colonial life. So much that, during the 17th and 18th centuries, syrup was a major source of high quality pure sugar.

Before the arrival of Europeans, the Indians used clay pots to boil maple sap over simple fires protected only by a roof of branches. This was the first version of the sugar shack. Over the years, the sugar shack became a place of gathering where traditional meals would be enjoyed. As a result, spring wasn’t the same without a visit to the sugar shack.

The maple syrup industry always made a point in supplying customers a pure natural product. Horses haul a tank over a set sleigh, an image of which has been incorporated into the industry symbol. This simple device—a flat bed over a pair of wooden skis—was the most efficient way to reach each bucket hung on a maple spout. The sap concentration was obtained with a wooden arch, which is a wood fire stove manually fed by the sugarmaker under a set of open pans. The pans are divided in channels in series, where the maple sap slowly concentrates from a 2 percent to 66 percent sugared solution. Even if the production methods have been streamlined since the colonial days, they remain basically the same. In the end, a totally pure syrup is obtained.

Processing  sap with RO
The use of reverse osmosis (RO) in maple sap concentration began in the mid-1970s. It takes 40 gallons of 2 percent sugared sap to produce a gallon of the unique liquid. The sap composition varies a lot from the beginning of the season to the end, and from year to year. Sap is a solution of 97 percent water, 2 percent sugar and 1 percent other molecules (mineral salts, metal ions, bacteria and biofilm). As a pure and natural product, sap cannot be produced by using chemicals to adjust the pH or avoid membrane fouling with anti-scaling agents.

During the first year of using membrane separation, the RO process was reserved for the biggest of sugar bush concentrations, referring to groves of maple trees where production occurs. Equipment design was derived from brackish water applications, so it was a design that normally included two to four banks of 4×40 (4-inch by 40-inch) brackish water membranes in parallel. Those RO systems were designed to operate at 600 pounds per square inch (psi) of pressure with a recovery from 5 to 7 percent per membrane, recovery being the relation between permeate and membrane feed flow. This configuration has the tendency to lose 30 to 50 percent of the membrane permeate flow, largely because of sap quality changes during the season. As the season advances, the sugared solution is in contact with stronger sun exposure, which increases microorganism growth that creates a biofilm layer over the membrane surface—normally called fouling.

The new generation of equipment, which uses nanofiltration (NF) membranes, has been designed with three pumps (feeding, pressurizing and recirculation). Most of the equipment has been designed to operate at 400 to 500 psi maximum and a permeate rate of 25 to 30 gallons per square foot per day (gfd). The use of NF membranes was a great breakthrough for maple syrup industry, as this technology permits sugar concentration at lower pressure than an RO membrane. The layout also ensures a strong cleaning action over the membrane surface and the recovery rate is approximately 10 percent per membrane.

Study on the farm 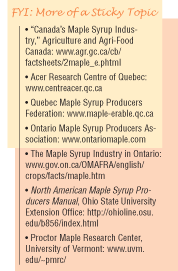 Butternut Mountain Farm is located in northern Vermont. It’s a 1,000-acre sugar-maple wood lot and Christmas tree farm on the slope of Butternut Mountain—a high, triple-peaked ridge behind the little town of Johnson.

In 1999, David Marvin of Butternut Mountain bought a new generation, 500 gallon per hour (gph) RO to process maple sap. He had used this technology since 1978 when he bought a 10 horsepower (hp) machine with 28 cellulose acetate (CA) membranes (4×40 size and nominal flow of 1,000 gph). In 1982, he purchased another 24 CA membranes (4×40 and 900 gph nominal flow). He was processing the incoming sap in a batch process to increase the sugar concentration. He had the same aforementioned pattern—permeate flow decreasing and difficulty cleaning the membrane—so he bought a new generation design unit.

“I bought a new system to scale down my operation, to cut boiling time, manpower cost and energy cost,” said Marvin. “I wanted to size each step of the production of incoming sap. With a constant 8 percent sugar sap feed to the evaporator, the maple syrup caramel taste is developed as the consumer likes. I am using 1.2 gallons of oil per gallon of maple syrup with an NF membrane instead of four gallons of oil per gallon of maple syrup, and an operator can do the work of two.”

The Springtech membrane system installed in Butternut Mountain Farm, includes a 1-hp feeding pump, a 5-hp combined pressure and re-circulation pump, an 8×40 nanofiltration membrane, and a built-in CIP (clean-in-place) automation to perform a cleaning when the membrane permeate performance declines by 15 percent. 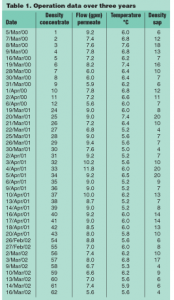 Table 1 shows the last three seasons of operation time vs. permeate flow of a 500-gph membrane for processed sap, the percentage of sugar in the membrane concentrate, and sap temperature in Celsius. The brix level in the sap—a measurement scale indicating the sugar content in a solution—and the temperature are the variables that most affect the permeate flow. Even after three seasons, the capacity of the machine stays within the design criteria. The actual gfd and recovery for the last season were 28.5 percent and 9.6 percent, respectively, which are very good results for a solution process without pre-treatment.

Cleaning is an aspect that’s very interesting in this industry, as all equipment is built with a CIP process on the membrane frame. The equipment is cleaned every night after a complete day of concentration either with a soap solution at 115°F or hot permeate. There’s a large amount of membrane which returns to the factory to be cleaned during the off-season, due to processing a natural solution without any pre-treatment. In spite of a daily membrane cleaning, the factory membrane cleaning ensures an optimum cleaning by trained people and a membrane life from seven to 10 years for RO/NF owners.

Conclusion
This is a portrait of a conservative industry, which was able to adapt a technology to its needs. Maple sap is gathered only 30 days over a period of two-and-a-half months. Sap composition and temperature change every day, accessibility of electrical power is often a concern, and sometimes equipment has to be engine powered. The maple syrup industry has doubled its production capacity in the last 10 years, and we have seen huge sugar bushes as large as 100,000 taps. This wouldn’t be possible without reverse osmosis and nanofiltration technology.

About the author
Yvon Pellerin is president of Les Manufacturiers d’Équipmements Acéricoles (LMEA) and co-owner and production director of A. Pellerin & Fils (dba Airablo) of Saint-Adrien de Ham, Quebec, Canada. He graduated  with a civil engineering and a business administration degree from the University of Sherbrooke in Canada. Pellerin can be reached at (819) 828-2828, (819) 828-3408 (fax) or email: [email protected]