Summary: Passage of the USEPA D/DBP Rule is driving utilities to look for methods to reduce DBP formation, particularly TTHMs and HAA5. On-site generated mixed oxidants have been demonstrated to reduce DBPs in multiple installations. Features of mixed oxidants contributing to decreased DBPs may include chlorine residual maintenance with a reduced oxidant dose, reduction of biofilms, and enhanced microflocculation effects.

While chemical disinfectant use in drinking water has drastically reduced disease, these disinfectants react with natural organic material in the raw water to form disinfection by-products (DBPs) that are hazardous to health. Chloroform, bromodichloromethane, dibromochloromethane and bromoform are all components of total trihalomethanes (TTHMs), which have been found to cause liver, kidney, or central nervous system problems, as well as increased risk of cancer. In 1979, the USEPA set a TTHM limit of 100 micrograms per liter (mg/L) for systems serving more than 10,000 people, defined as “large surface water systems.”

Amendments to the Safe Drinking Water Act (SDWA) in 1996 attempt to further balance the risks between microbial pathogens and DBPs with the passage of Stage 1 Disinfectants/Disinfection By-Product (D/DBP) Rule. This lowers the permissible limit for TTHMs to 80 mg/L and establishes a new limit for the five haloacetic acids* (HAA5) of 60 mg/L. These limits will affect all public water systems that add a disinfectant, regardless of their size. The rule went into effect in January 2002 for large surface water systems and will apply in January 2004 to groundwater and small surface water systems.1

Mixing up an alternative
One initiative aimed at reducing DBPs is use of mixed oxidants as a disinfectant. On-site generation of a mixed-oxidant solution, which consists primarily of hypochlorous acid, utilizes a process similar to on-site generation of sodium hypochlorite. A brine solution is fed through an electrolytic cell, power is applied, and the resulting oxidant solution is created. The style of electrolytic cell and operating parameters determine the formation of straight hypochlorite vs. formation of mixed oxidants.

Mixed oxidants have been documented by numerous agencies to inactivate even chlorine-resistant microorganisms, performing much like ozone or chlorine dioxide. The solution also will leave a durable chlorine residual in the distribution system; however, because of the presence of chlorine in the mixed-oxidant solution, the formation of DBPs will still occur. Evidence from a number of installations, though, shows DBP reductions up to 50 percent. Depending on the level of precursors in the raw water, mixed oxidants may be a viable alternative for DBP reduction while still providing the required chlorine residual. 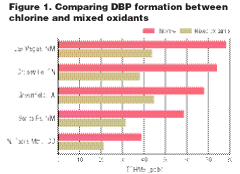 Mixed-oxidant chemistry
Species other than chlorine in the mixed-oxidant solution haven’t been directly verified due to the complexity and interferences of multi-oxidant chemistry. Classical laboratory methods for detection of oxidants don’t function properly in the presence of a large chlorine matrix; thus, studies on mixed oxidants have detected only chlorine when using these methods.2 Yet, several performance components demonstrate that the solution contains other chloroxygen species beyond free available chlorine.

The following species can potentially be formed when salt (NaCl) and water (H2O) are combined in electrolysis.
From the low pH anode:

From the high pH cathode:

While the manufacturer doesn’t claim these various components to be present in the solution, the voltage potential exists for their formation. If formed, these individual components could be recombined into other chloroxygen species.

Another key indicator for the presence of oxidants other than chlorine in the mixed-oxidant solution is reduction in TTHMs and HAA5, as demonstrated at a number of water utilities that replaced conventional chlorination with mixed-oxidant technology. Although this phenomenon isn’t seen at every site, no installation ever observed DBP levels with mixed oxidants above the levels produced by chlorine. In fact, in the great majority of mixed-oxidant installations, both TTHMs and HAA5 are typically reduced by 30-50 percent compared to levels formed with chlorine (see Figure 2).4,5,6,7&8 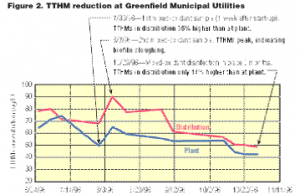 Theories for behavioral differences
Significant behavioral differences between mixed oxidants and chlorine have been observed both in laboratory testing and field installations, although only chlorine can be measured in the mixed-oxidant solution. There are several proposed explanations for the reduction in DBP formation in contrast to hypochlorite. These theories include reduction of biofilm, improved chlorine residual at a reduced dosage, and microflocculation to remove precursors.

Biofilm reduction
Evidence on the ability of mixed oxidants to help reduce biofilm and algae from the distribution system and clarifiers exists. Biogrowth able to survive with chlorine as a disinfectant is typically eliminated shortly after conversion to mixed oxidants. Within the first few months of installation of a mixed-oxidant generator, distribution system flushing may be required to remove detached biosolids until the system has stabilized. Once past the stabilization process, surfaces remain free of biofilm or algae as long as mixed oxidants are used.

that time, chlorine gas was used to disinfect one line and mixed oxidants were used to disinfect the other line. The line disinfected with chlorine contained biofilm only 200 feet from the disinfection station. The line break in the mixed-oxidant line occurred about half a mile from the disinfection station, so the expectation was an even more contaminated line. On the contrary, the pipe exposed to mixed-oxidant treatment was spotless (see Figure 3), as though it had never been used. Water from both sources was from the same aquifer and both lines were installed decades ago.

Better residual at lower dose
The free available chlorine (FAC) residual from mixed oxidants is more robust than the FAC residual from traditional chlorination. The mixed-oxidant FAC residual can endure for very long distances and stays in the lines for a much longer period of time. This is likely related to the removal of substances such as biofilm, which creates oxidant demand within the distribution system. Correspondingly, treatment plants typically notice a reduction in the required dose at the plant to maintain the same residual at the end of the line. After the distribution system has stabilized, most mixed-oxidant users report a 30 percent reduction in dose at the clearwell, a tank or reservoir of filtered water used to backwash a filter. A secondary effect of the reduced dosage is a correlated reduction in DBP formation. Since chlorine requirements have decreased, there’s less chlorine in the system that can react with organic matter.4,7,8,9,10&11

By enhancing the coagulation process, greater removal of precursors for DBP formation is achieved. A variety of installations using mixed oxidants in pretreatment report a microflocculation effect and a reduction in TTHMs and HAA5 not seen with traditional chlorination (See Figure 4). In fact, these sites were unable to chlorinate in pretreatment due to excessive TTHM formation. Although 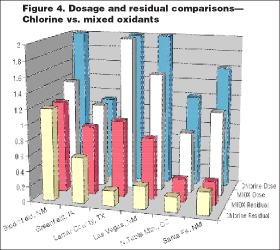 Conclusion
As the USEPA enforces implementation of new DBP limits, utilities will need to investigate the best technology for their site. Several behavioral differences between mixed oxidants and other chlorine technologies, including superior inactivation capability and reduced formation of DBPs, indicate the mixed-oxidant solution is more than just hypochlorite generated on site. There are a number of explanations for decreased TTHM and HAA5 formation, including elimination of biofilm, improved chlorine residual at a reduced dosage, and microflocculation to remove precursors. These explanations are supported by operational evidence from numerous field installations.

In implementation guidelines for the Stage 1 D/DBP Rule, the USEPA describes a Best Available Technology (BAT) for users of chlorine, chloramines and chlorine dioxide as “control of treatment processes to reduce disinfectant demand and control of disinfection treatment processes to reduce disinfectant levels.”12 Mixed oxidants alone, without the use of any other chemicals or treatment techniques, are shown to both reduce disinfectant demand and overall chemical usage. Although current analytical techniques can detect only chlorine in the mixed-oxidant solution, chlorine alone cannot account for the elimination of biofilm, reduced doses and lower levels of DBPs that mixed-oxidant installations report. The operational improvements of treatment with mixed oxidants are well documented and should be taken into consideration by any site designing or redesigning their disinfection process.

About the author
Beth Hamm, of Tetra Tech Inc., of Lexington, Ky., has 14 years of experience in the drinking water field—nine years as water quality supervisor for Kentucky-American Water Company. She holds a Class IV-A Drinking Water License, is actively involved in AWWA at national and section levels, and heads up the Tetra Tech Inc. SDWA Task Force. She’s also a member of the AWWA National Disinfection Committee and the Coagulation & Filtration Committee. Hamm received her bachelor’s degree in chemistry from Cumberland College and her master’s degree in chemistry from Eastern Kentucky University. She can be reached at (859) 223-8000, email: hamme@tetratech.com or website: www.tetratech.com