A record 67.5 percent of all Americans own their homes, a figure tha

t could jump to over 69 percent according to the latest forecast of Kermit Baker, chief economist of The American Institute of Architects. In October 2002, existing home sales were on a path to reach 5,465,000 this year while new home sales were projected to reach 929,000.

With home mortgage rates near historic lows, new “move-ins” have again reached a high of 20 percent. More than 43 million Americans moved during 1999 and 2000, according to a study by the U.S. Census Bureau. Nearly 33 percent of renters, compared with 9 percent of homeowners, moved during the same one-year period.

What does increased mobility mean to you? For one thing, new movers will spend more on home-related products and services within six months of moving than established residents will spend in two years. For another, many relocators won’t like the water in their new homes (see EXTRA).

Who moves and why
According to the U.S. Census Bureau, more than half (52 percent) of all people who moved did so for housing-related reasons. These reasons include the desire to own a home, live in a less expensive home or reside in a better neighborhood. Short-distance movers often do so to live in a better house or apartment. A new job or a job transfer was the most common reason cited for long-distance moves, defined as moving from one county to another.

As one might expect, moving rates decline with a person’s age. About one-third of people in their 20s moved while only 4 percent of those between 65 and 84 did.

Different priorities
According to a study by the National Association of Home Builders (NAHB, www.nahb.org), in the first 12 months after purchasing a newly built home, owners spend an average of $6,500 to furnish, decorate and improve their homes. During the first year, buyers of existing homes spend $2,268 more than non-moving homeowners.

Move-in strategies
With one in five Americans again on the move, it makes good sense to target new move-ins in 2003. To do that, you first need to identify people moving into new or existing homes in your market area. 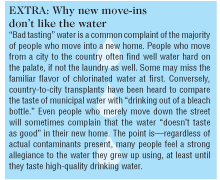 A good place to start is at your local residential real estate office. They have daily access to people looking for resale homes through classified newspaper ads and multiple listing services. Successful real estate agents spend a good deal of time prospecting for listings among past customers and potential new ones. Their techniques vary but include door knocking, telemarketing, direct mail and door hangers and flyers that often feature an “ice breaker” offer. Why not talk with a local broker or associate about offering a “free trial” on delivered bottled water or a point-of-use (POU) drinking water system for listing prospects and home shoppers? Let their “ice breaker” be your door opener for water and equipment sales.

Consider placing a free “demo” water cooler or cabinet POU system in a leading real estate office, maintained by you at no cost or reduced cost. Ask to place a sign with your name and phone number, along with literature, near the water system or cooler. Remember, virtually all home buyers and most people who list their homes for sale will visit the real estate office at least once during the process. Potential home buyers will get to sample really good-tasting water, and your POU solution to local water problems will be on display every day for all members of the broker’s sales team.

Ask for the cooperation of the real estate office manager or broker. He or she might look askance at a cooperative proposal with just one salesperson. It’s proper as well as potentially more productive to seek cooperation directly with office management.

In establishing a relationship, ask for regular access to the office’s multiple listing services. While this service only lists sellers, keep in mind that a majority of people who list their homes for sale are also shopping for new ones. Real estate offices also subscribe to relocation referral services. They can be another valuable source for leads from people moving into the area from out of town.

Most real estate offices subscribe to the code of ethics provided by the National Association of Realtors (NAR). While the NAR (www.nar.org) code doesn’t forbid real estate brokers or agents from accepting compensation for serving as “bird dogs” to outside businesses, it requires that the agent make full disclosure of the relationship and terms to their clients at the time of referral of services.

Working with builders
To reach that portion of new move-ins who are buying new homes, you’ll need to work with local builders. One way to meet builders is to attend a meeting of the regional home builders association or schedule a meeting with a successful builder.

Do your homework to determine if local builders are accustomed to providing homeowners with water softeners and/or POU drinking water systems as standard features in their new homes. Often, builders offer softeners and POU as optional amenities. In that case, suggest that sales be placed through the builder — allowing for a profitable mark-up — or sold direct, according to the builder’s preference.

Consider offering a model home program and providing water treatment products installed in models or displayed at the builder’s open house promotions. Contact your local Welcome Wagon organization (www.homestore.com/shop/welcomewagon) to participate in their coupon program for new move-ins. A free home water test or free home trial offer will open new doors for you and becomes a source for referrals from local “newcomers” clubs.

Dealers and manufacturers may purchase lists of new move-ins from professional list providers such as CAS Inc., of Omaha, Neb., which tracks more than 3 million owner-occupied moves nationally. Their new mover file is generated from a multitude of public and proprietary change-of-address sources. CAS can also identify long-distance new movers — families who have moved 50 miles or more. They can be reached at (800) 482-7705 or www.cas-online.com

Conclusion
Historically low home mortgage rates have 20 percent of the population moving. That’s a great opportunity for water improvement and bottled water dealers to develop new sales leads and cultivate referrals. Be sure to include plans to reach new move-ins in your 2003 marketing plan.

David H. Martin is president of Lenzi Martin Marketing, of Oak Park, Ill., a firm specializing in water improvement and environmental marketing that integrates old and new media. He can be reached at (708) 848-8404, e-mail: http://newage@attbi.com or website: www.lenzimartin.com .