Livin’ It Up Down Under: Continental Water Systems of Sydney, Australia 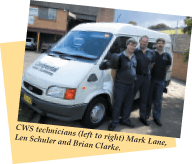 In comparison to the continental United States, Australia is much larger in area with a considerably smaller population. Hence, there are great distances to travel to reach customers for any water treatment dealer looking to make a go of it down under. Plus, the municipal water supplies are, by and large, very well regarded by the citizenry. So why is Bruce Maclennan, owner and president of Continental Water Systems Pty. Ltd. (CWS), of Sydney, Australia, smiling all the way to the bank?

“The municipal water supplies are pretty good but when you get further out (in the rural areas), then you get more problems,” he says. “(And) for international companies, there are easier fish to fry, especially in Europe.”

Public awareness
According to Maclennan, 80 to 85 percent of Australia’s population lives in the larger metropolitan areas. Plus, they’re becoming more in tune with their household water. “People are becoming more aware of water quality issues especially in the rural areas,” he says. “They are demanding and getting better quality water from their local water authority.”

Registered in Sydney in 1987 under the name Liquipure, CWS was established to sell service deionization (DI) and small laboratory water systems in the Sydney and Melbourne metropolitan areas. According to Maclennan, who began in the water treatment business in 1975, Kinetico had a distributor in Australia for a number of years. The previous distributor lost the business in a fire and decided not to continue; hence, the product was in limbo in Australia for a year to 18 months. CWS was appointed an agent and picked up interest in the Kinetico product. “It’s had a renewed life,” he says. 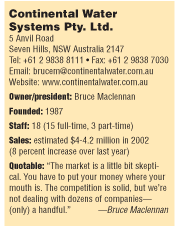 A resin regeneration plant was located in Sydney and service DI tanks were delivered locally and transported to and from Melbourne, 685 miles south of Sydney. Referred to in the United States as portable exchange DI — service DI is the process of supplying ion exchange resin in various sized tanks ready for use to produce high purity demineralized or deionized water. When the resin tanks are exhausted, they’re exchanged and returned to the plant where the resin is regenerated for reuse. This service provides high purity water on demand and eliminates the need for onsite resin regeneration equipment, the storage of hazardous chemicals, and the treatment of associated trade waste.

Bringing DI to the land
While service DI was common in the United States in the late 1980s, it was new to Australian organizations that had to be educated before they could be sold on the technology. Meanwhile, Liquipure set up sales offices in Sydney and Melbourne, changed its name to Continental Water Systems, and promoted its products and services.

In 1990, Continental USA decided to sell its Australian operation, which was purchased in 1991 and is now an Australian owned and operated company. The Permutit Company in Australia was also purchased by USFilter not long after Continental USA, forcing CWS to find a new source of water treatment equipment and technologies to meet expanding local competition.

CWS started manufacturing small, laboratory-scale, water treatment systems and then progressed to manufacturing larger reverse osmosis (RO) systems with components sourced locally and overseas. In the mid-1990s, it invested in and started selling small affordable corona discharge ozone generators into many new markets where ozone had previously been prohibitively expensive. A number of systems were sold in Canada, the United States and Asia.

Playing in the pool
In the late ’90s, CWS began manufacturing swimming pool and industrial pumps under license for a German company. A factory was set up on the Gold Coast in Queensland. Although not water treatment equipment, the synergy of the manufacturing technologies complemented the company’s operation.

Through various contacts made at international water treatment trade shows (some sponsored by the Water Quality Association) over the years, new water treatment equipment technologies were investigated, which led the company into municipal water treatment disinfection. Considerable interest grew in onsite generation of oxidants and disinfection systems and many are in locations across Australia.

In 2000, CWS was appointed the exclusive Australian distributor for Kinetico Inc. and continued the development of a national consumers products dealership and the introduction of its commercial, engineered and municipal systems.

From humble beginnings selling service DI and small laboratory systems locally with a total of six employees, the company has expanded its range of water treatment technologies that are sold around the globe. Today, 19 people are employed at CWS. Some products and services include auto DI, ceramic and multi-media filtration, corona discharge ozone generators, electrodeionization, laboratory high purity water systems, onsite disinfection systems, RO, service DI, softeners, ultrafiltration, ultraviolet, and pumps from 50 to 330 gallons per minute. In addition, CWS has manufactured, and sold wholesale, between 4,000 and 5,000 pumps under the Speck brand name for the swimming pool industry — commercial and household — for five years.

Going commercial
Even with a working relationship with Kinetico, most of CWS’ business rests with the commercial industry. It constitutes 90 percent of all accounts and residential fills the other 10 percent. Maclennan, 54, says most of the commercial accounts (95 percent) use a municipal water supply. Still, obstacles arise in the form of iron, manganese, tannins and hardness. Very little industrial work is available in Sydney, he says. 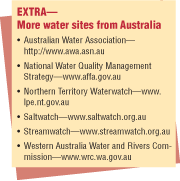 National sales manager Peter Croft adds that the company’s commercial accounts include universities, pharmaceutical companies, cosmetic companies, and the hospital/medical and steel industries. In all, CWS has 450 accounts that represent a good cross section of Sydney’s population, which is currently 4 million. Even with a broad-based market, Maclennan says the business will service any customer within a 360-mile radius.

“It’s only been in the last two years that we have been involved with Kinetico that we got into residential (applications). Kinetico is the fastest growing part of the business,” Croft said. “And we’re seeing that some of the Kinetico technologies have some significant advantages to commercial/industrial and municipality systems.”

With an eye on residential
The situation is primed for a shift to more residential market work for CWS. “In Sydney, the residential water treatment market is growing, but it’s cost-driven and not quality-driven,” Croft stressed. “If someone in Sydney, Mel-bourne or any big metropolitan area is going to put a drinking water system in their home, it’s going to be mainly for taste reasons and not (contaminant) control.”

Water treatment is somewhat limited in its scope here in that many technologies are viewed skeptically among the country’s water authorities. “Introducing anything new in Australia is a hurdle. Proven technologies in other parts of the world don’t hold much weight here,” he said.

Conclusion
For 15 years, CWS has established its presence in the Australian water treatment market. One of the keys to the company’s success seems to be finding a niche in a unique marketplace and responding to the public’s needs. Whether it’s commercial or residential applications with assistance from Kinetico, Maclennan and CWS are well prepared for any future industry trends.