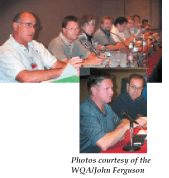 The turmoil at its New Orleans national convention in March over organization of the Water Quality Association, stagnant membership and dropping trade show attendance, seemed to have evaporated in the late summer heat at the Mid-Year Leadership Conference, hosted by Sedona, Ariz., where a more workmanlike attitude prevailed.

Ominously, though, the conference began on Sept. 11 with a moment of silence for the victims of the terrorist airplane hijacking attacks a year earlier. It was Sept. 19 a year ago that this resort town of 10,000 in northern 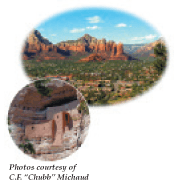 Arizona’s red rock country just south of Flagstaff was initially scheduled to host the event. That was before “9/11” became a household term and, thus, that meeting was canceled. WQA executive director Peter Censky also duly noted this year’s meeting ended on Friday the 13th.

A revamped committee meeting schedule crunched the events into roughly 2-½ days—much to the delight of many WQA members—from the nearly five full days that Mid-Year had grown to encompass in recent years. The move was designed to combine many sessions with similar discussion topics, although some minor redundancy remained.

Strategically speaking
With a strategic planning process under way in the Big Easy to reorganize the association, it was down to the nuts and bolts of how that should be accomplished here with more of a general sense of optimism. This was highlighted by the first event, presentation of an initial draft of results from a survey of WQA membership evaluating the association and querying members on whether it should be split up. An overwhelming 80 percent were against that, which was almost the only clear-cut answer given in the survey (see Figures 1,2&3). A lack of differentiation in how items were rated on importance—all high—made it difficult to discern a clear direction on many questions, although it was stressed that a final analysis and executive summary were still to be done by the surveyor, The Gary Siegel Organization Inc. 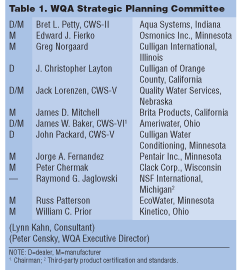 “The only definite thing I got out of the whole thing was that nobody wants to split the association,” said Ohio dealer Ned Jones, a past WQA president. “I was disappointed, but not surprised.”

Consultant Lynn Kahn, of The Kahn Group, Lincolnwood, Ill., was hired in February to oversee the strategic planning process. The 12-member Strategic Planning Committee (see Table 1) was put together by the WQA Board of Governors last spring to take into account consolidation and changes in the industry over the last several years and create a refocused, more vibrant association. An overall structure for this reorganization plan is to be presented at the next WQA convention in March in Las Vegas.

“I hope… they do not try to play God and try to recreate the association based on 12 opinions,” said immediate past WQA president C.R. Hall, who has dealerships in Kansas, Missouri and Ohio. “The association can’t lead the industry; it has to mirror the industry.”

A closed committee meeting was held on Saturday—after the conference ended—and not much was being said about what the plan might entail other than hints, such as recognition during the Retail Dealer Section meeting that governance would be high on the list. The issue has been tabled since WQA absorbed an industrial water treatment equipment association and created a consumer products section in 1996.

Retail concerns
“If I had a concern, it’s in the changing of the governance of the WQA,” said California dealer Chris Layton, another past WQA president at the section meeting. “If it’s looking at the current structure of manufacturers and retail dealers, we might well anticipate suggestions to dilute those two caucuses to recognize other channels to market.”
John Packard, yet another past president and owner of the biggest Culligan independent dealer network, replied, “I’m on that committee and what concerns me is that there’s more talk in the hallways about critical issues and not enough in here. We now have a 50/50 balance between manufacturers and retailers. The manufacturers feel they want more say in how the organization is run, which leads to governance and voting. There are other elements of retail not in this room that don’t participate because they don’t show up.”

Yet some doubted whether big box retailers or consumer products companies would ever fully embrace the WQA, and questioned how these other channels would be represented —since they’re being supplied often by the same manufacturers that supply dealers. They also acknowledged overlap with those manufacturers serving commercial/industrial water treatment equipment needs. Were manufacturers to be given two votes to dealers’ one?

“I would not mind giving up a couple votes on the board, but I would not want manufacture

rs to have a majority,” said Florida dealer Gerry Dierolf.

“If we give up 50 percent, we should all be aware that we may be putting uniquely retail issues up to an alliance that may represent other interests,” Layton added.

“We need to make sure we don’t assume there’s a power grab going on. We have to acknowledge that the industry is different now than it was 30 years ago,” said C.R. Hall.

Indiana dealer Bob Hawkins, who chaired the section meeting, said dealers shouldn’t let fear of losing clout in the organization keep them from participating or opposing change: “We need to think not about being at war with each other… We need to all get behind the wagon and push… We’re all in this together. The manufacturers can make all the equipment they want. But, if there isn’t somebody to sell it, it’s just scrap in a junkyard.” 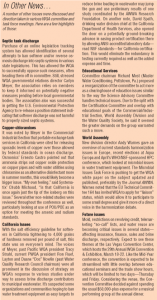 Conclusion
Other sections and committees stayed pretty much with their usual agendas and did not debate the evolving strategic plan (see In Other News…). For more specifics on the WQA Mid-Year Leadership Conference, go to our website—www.wcponline.com—where you’ll find a detailed meeting-by-meeting report under “Down to the Bone in the Arizona Desert.”